The FGN bond market kicked off a new week on a very drab note but picking slightly towards the end of the session. Much of today’s activities focused on the auction bonds and some benchmark bonds; 2034s and 2049s papers in particular.

The 2050s remained largely bided with very few offers available to match for the trade. The earlier hours of the day started with its quote opening wide at 10.10%/9.80% but squeezed slightly towards the end of the trading session as the few transactions sealed settled around 9.90%. By and large, yield compressed by an average of c.14bps across the yields curve.

For tomorrow, we expect activities to continue to pick especially at the tail of the curve as more local investors continue to show interest in long-dated bonds. 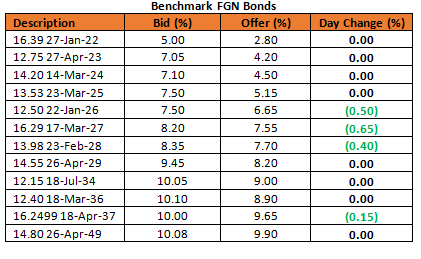 At the OMO bills space, trade volumes continue to dwindle with the few trades seen largely client-driven. We noted a bit of interest in the longer-dated bills May, June, and July papers as the May/June bill started off the day around 4.40% levels but dropped by 15bps to close the day at 4.25% on the offer. The July bills were offered better with most of its trading settling around 4.85%.

The NTB space, also traded on a very light note large driven by retail-orders who cherry-picked on few May bills offered better than its pairs

For tomorrow, market activities are expected to continue to trade on this sluggish note while interest may remain for longer-dated OMO bills. 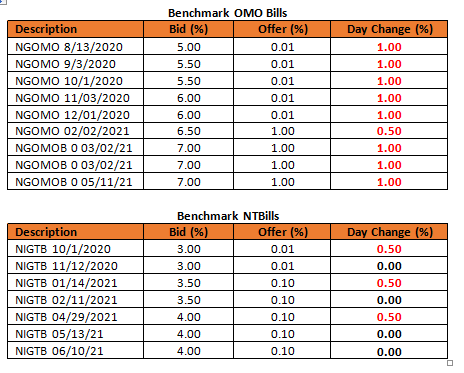 Interbank rates continued to drop, plunging by an average c.15% to open the week. System liquidity opened at c.N182.07BN positive, and with no significant funding pressures on the day, interbank rates closed the day in the single-digit corridor for OBB and OVN rates at 5.25% and 6.13% respectively.

With no significant funding pressures, we expect the market to trade around this level in interbank session tomorrow.

Transaction volumes remained very weak in the IEFX window, with very low volumes passing through the market albeit the Naira appreciates by N0.50k.

Most banks remained bided for the most part of the trading session between N383.00/$ and N387.00/$ while all other markets segments remained stable compared to Friday’s closing.

Read Also:  Henceforth, Loan Defaults Will Be Settled With Deposits From Other Banks

The NGERIA Sovereigns opened the new week on a weaker note with less aggressive bids shown across the curve following the rebound in oil prices last week.

The 2025s and 2049s papers were the greatest losers across the sovereign curve as locals showed no interest in papers offered better, compared to the market, at the belly and tail of the curve. Consequently, we saw yields expand on an average of c.2bps across the curve.

The NGERIA Corps also had a quiet session albeit large movement in yield for the SEPPLN 22s which compressed by c.45bps compared to Friday’s closing. 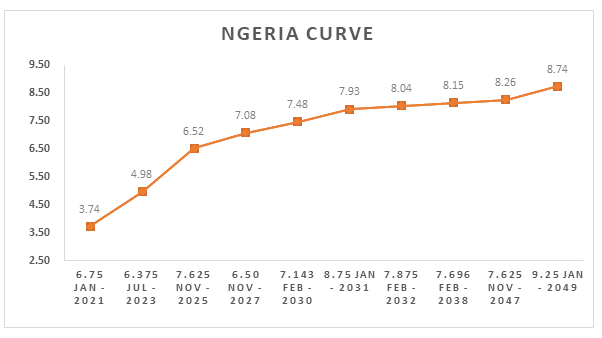 FGN Bonds We also saw little action on the 2045 bonds, with trades executed around 11.65% ahead of supply from the bond auction. Consequently, yields...
Read more