In the just concluded week, the Nigerian National Bureau of Statistics (NBS) published two important national data – the July 2020 Consumer Price Index (CPI) report and the Q2’2020 Labour Force Survey report both of which caught our interest for analysis. This became pertinent in other to establish and compare Nigeria’s Misery Index (a snapshot measure of an economy’s health based on the sum-up value of its Inflation and Unemployment rates at a point in time) with other African peers, and to weigh the negative impact of the COVID-19 pandemic on the health of the Nigeria economy in terms of the standard of living of an average citizen. 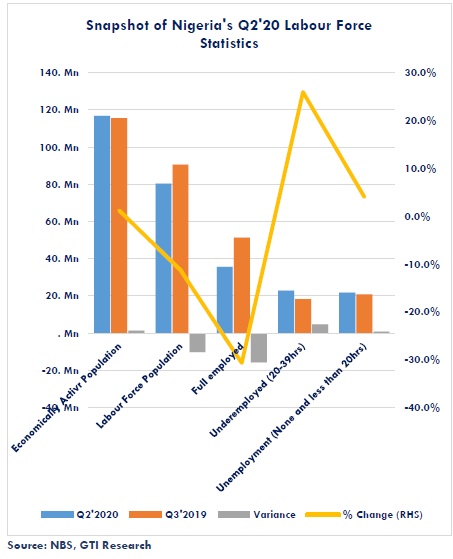 Inference from the July CPI report

In line with our projection as contained in our weekly note of last week, Nigeria’s Headline Inflation rate printed at 12.82%y/y and 1.25%m/m in the month of July 2020. This represents the eleventh year-on-year and tenth month-on-month consecutive increases in the Headline Inflation rate and was mostly driven by the spike in the Food Inflation sub-component of the Headline Inflation index (due to increases in the prices of major food items), while the Core Inflation sub-component moderated mildly. The spike in the Food Inflation sub-component (we believe) jointly resulted from the disruption of plating activities during the peak of the COVID-19 pandemic induced lockdown between March and May 2020, and the increase in road transport fare in July 2020 owing jointly to the upward review of petrol price to₦145 per litre (from ₦138), the partial closure of the third mainland bridge for repair works, and the characteristic high demand for food product during Salah festivity.

As anticipated by market analysts (based on the projected negative impact of the COVID-19 pandemic), Nigeria’s unemployment rate rose to an unprecedented 27.1% as at the end of Q2’2020 from 23.1% previously reported in Q3’2019. Aside from the reported 400bps (or 4%) increase in the Unemployment rate between Q3’2019 and Q2’2020, there are also several dynamics in the newly released data that cause for concern. 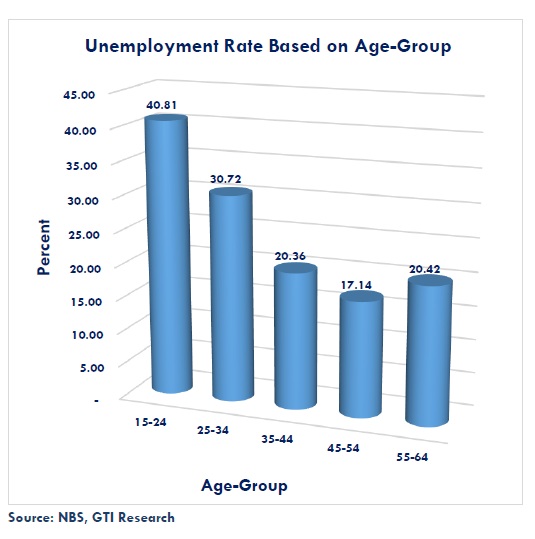 The surprise reduction in actual Labour Force Population (which ought to have increased, other things being equal) was mainly attributed (by the NBS) to the culture of “Full housewives” in some states and negative attitude towards work by some in this segment of the population.

However, we are of the opinion that 10.17 million persons of active working age (assuming all are women) cannot have been absorbed into marriages in those ethnic groups that promote the culture of Full housewives within the space of three quarters (or 9months), neither can they all have a negative attitude towards work. Hence, we assume the NBS may have adopted a tacit assumption to arrive at this figure.

From one perspective, we suspect that the divergent trend (the marked decline in Full employment and the surge in Underemployment size) could be due to the downsizing of employees (most of whom could be full-time staff) by some businesses/companies badly affected by the pandemic as a result of which most of the affected persons settled for Underemployed jobs to keep their body, soul, and spirit intact.

From another perspective, the divergent trend could be partly attributed to the sudden shift of most business and learning activities to online medium (in other to comply with social distance directive), hence, making some jobs that previously required 40 hours or more (per week) to be completed to now require less.

Thirdly, the total number of Unemployed persons (defined as working between 0 and 19 hours weekly) rose by 4% to 21.76 million from 20.92 million in Q3’2019. When disaggregated based on educational qualifications, holders of First degree/HND accounted for the largest portion – 14%, while the lowest portion – 5.9% are those in Vocational/Commercial education. This further highlights the need for the government to implement policies that will support SMEs, as the sector has strong potential to absorb the large unemployed population. 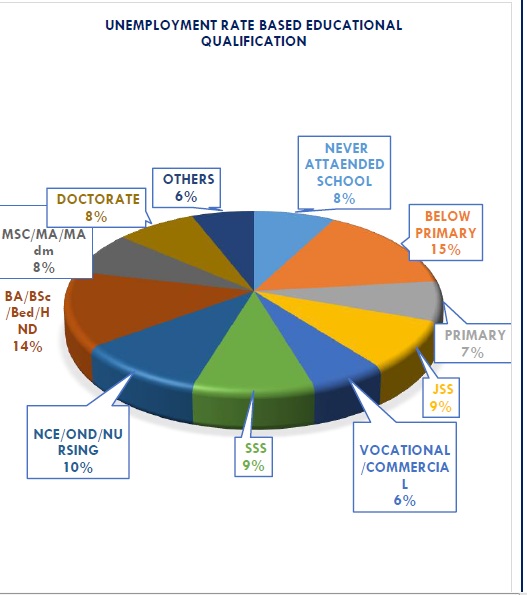 Drawing from the most recent statistics from Nigeria and five other top economies in Africa –South Africa, Ghana, Algeria, Egypt, and Kenya, Nigeria’s Misery Index stood at 39.92% (based on the orthodox Author Okun’s Misery Index composition – Inflation plus Unemployment rate), high above the five other African peers. This implies that the Nigeran economy is less healthy compared to selected African peers, and an average Nigerian citizen has a relatively low living standard.

Using the John Hopkins modified Misery Index model which is obtained from the difference between the sum of unemployment, inflation, and lending rate and the real GDP growth rate (i.e. Un+In+Lr-GDP), Nigeria’s Misery Index still settled high above other peers, printing at 66.88% compared to the closest peer, Ghana with 47.80%.

Earlier, the National Bureau of Statistics (NBS) published its long-awaited quarterly unemployment and underemployment report for Q4-17 to Q3-18. According to the report, the...
Read more

The misery index is an economic indicator originally created by Arthur Okun, a former Brookings Institution economist and member of the Council of Economic...
Read more

2018 Misery Index: What will be the Most Miserable Economies in 2018? (Infograph)

As Steve Hanke put it, the human condition inhibits a vast continuum between “happy” and “miserable.” When it comes to economics, misery tends to...
Read more

Rivers State has the Highest Misery Index in Nigeria