Flour Mills of Nigeria Plc (‘FMN’ or ‘The Group) reported rather impressive figures for its FY’20 financial year. The Group recorded growth on both its topline and bottomline. Specifically, revenue grew by 9% year-on-year (YoY) from N527.41bn in FY’19 to N573.77bn in FY’20.

Some of the factors that accounted for the revenue growth include introduction of new products with improved packaging and accelerated distribution.

Notably, the Group sold more of its highmargin brands, relative to what was obtainable in the previous year where the Group downtraded its products. In our view, we believe that the ability of the Group to successfully sell its higher margin brands was on the back of an increased market share during the year, following the land border closure that limited the influx of cheap smuggled competing products in the market.

We note that the Group had earlier struggled to keep pace with the cheap smuggled products in the market due to their low prices, a situation that prompted the Group to
downtrade, thereby resulting to lower revenue and lower margins.

In the Food business segment (c.63% of Group’s total revenue), revenue grew by 7% YoY from N335.61bn in FY’19 to N358.35bn in FY’20. During the year, the Group launched new products, with a specific focus on ‘Business to Consumer’ (B2C) to align with the changing lifestyle and consumption pattern of consumers.

According to the Group, the B2C segment, led by Pasta and Ball Foods achieved c.20% growth during the financial year. Some other efforts made by the Group include the repackaging and resizing of some products, improved route-to-market, and effective distribution.

The Sugar business segment (c.17% of Group’s total revenue) recorded an 18% YoY revenue growth (from N82.69bn in FY’19 to N97.63bn in FY’20), majorly driven by volume growth. The Group established a growing presence in the retail market with the introduction of smaller packs of its granular sugar and sugar cubes products.

An improved operational efficiency in its Sunti Golden Sugar factory resulted in an output growth of 15% due to mechanical harvesting, strengthening of cane haulage facilities and installation of a vacuum pump condenser. In addition, distribution channels were improved by deploying smaller trucks to improve delivery time.

The Agro Allied business segment (c.18% of Group’s total revenue) grew by 20% YoY from N88.10bn in FY’19 to N105.46bn in FY’20. The growth recorded in the Agro Allied business was driven by volume growth, particularly in its Oil and Fats (Premium Edible Oils), Proteins (Premier Feed) and Golden Fertiliser products.

We strongly link the double-digit growth recorded in the Agro Allied business segment to the positive impact of the land border closure on the Group’s business.

Bottomline Grows On the Back of Lower Finance Costs

About the lower finance cost, we note that the Group deleveraged its balance sheet during the financial year, as reflected in the 14% decline in total borrowings from N126.94bn in FY’19 to N109.56bn in FY’20. We also note that the Group issued a N20.00bn corporate bond to replace expensive short-term facilities during the year. 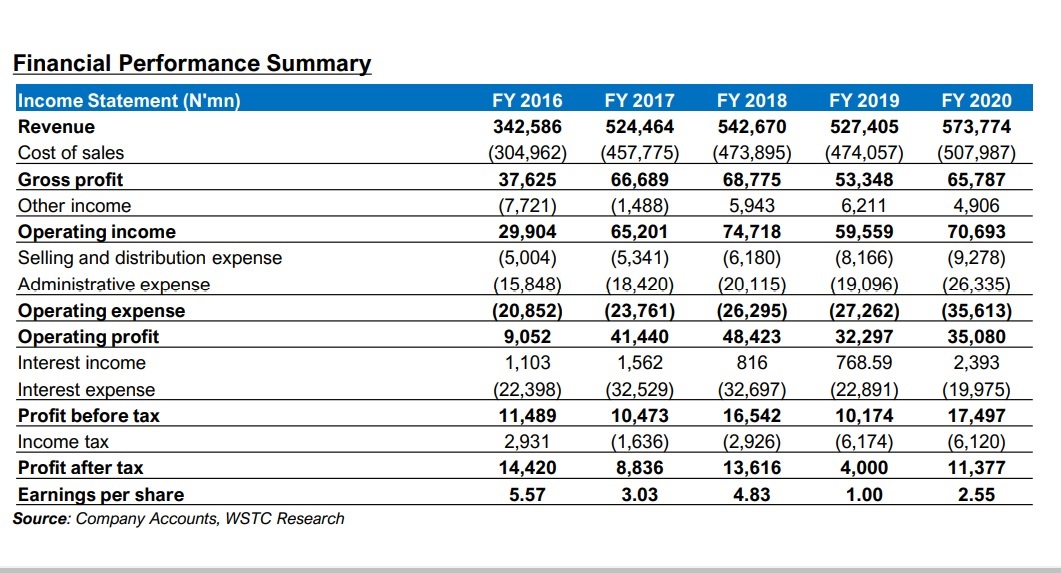 The Group’s continued focus on route-to-market strategy paid off into a new financial year. Revenue grew by 15% YoY from N134.75bn in Q1’20 to N154.58bn in Q1’21. The topline growth was driven by a strong grow h recorded across all its business segments.

In addition, the sustained land border closure was accretive to the Group’s Pasta volume (+15% YoY). The Agro Allied segment maintained its growth momentum, reflected in the 29% YoY revenue growth.

We partly attribute the revenue growth to increased demand by household, in their effort to stock up ahead of the sit-at-home directive by the authorities. Also, we believe that the new Aqua product, launched to target toll millers, had a high reception, thus driving overall volume growth in the Animal Feed business.

The Sugar business segment also rose by 12% year-on-year, on the back of volume growth. Notably, the impact of the sustained border closure resulted in an improved access to market. The Group continued to maintain operational efficiency in its Sunti plant, driven by investment in harvesting mechanisation and sugar cane haulage.

We note that the Group delivered a lower cost margin despite increased cost pressures including the impact of exchange rate devaluation on raw material imports, as well as higher import duty (from 5% to 10%) on imports of raw sugar. As a result of the lower cost margin, gross profit spiked by 55% YoY from N16.47bn in Q1’20 to N25.55bn in Q1’21. 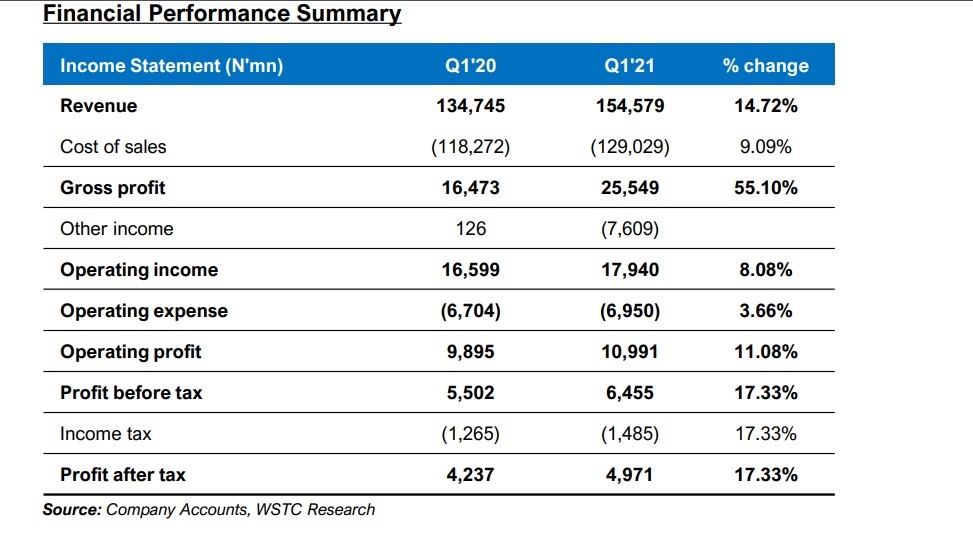 We believe that the Group will maintain its current momentum in the near to medium term, on the back of a possibly sustained land border closure.

We posit that given the Group’s strategic positioning in the industry; it is positioned to expand market share over the course of the period when the land borders remain closed.

We also think that the existing B2C strategy of the Group, particularly in the Food and Agro Allied business segments will be value accretive to the Group’s earnings. We believe so because of the changing trend of household consumption pattern, amid  shrinking income and purchasing power.

We, however, note the impact of exchange rate volatility in the operating performance of the Group. We also believe that the major risk faced by the Group is the reopening of the land border.

We arrived at our fair value for the business using a blend of Discounted Cash Flow (DCF) Model and Dividend Discounted Model (DDM). Using a discount rate of 17% (risk-free rate: 8%, beta: 0.67x, equity risk premium: 13%) to discount our projected cash flows and dividends, we estimate a fair value of N23.46 for the Group.

At the current market price, the total return (price return and dividend yield) on the stock stands at 32%. Hence, we recommend a BUY. 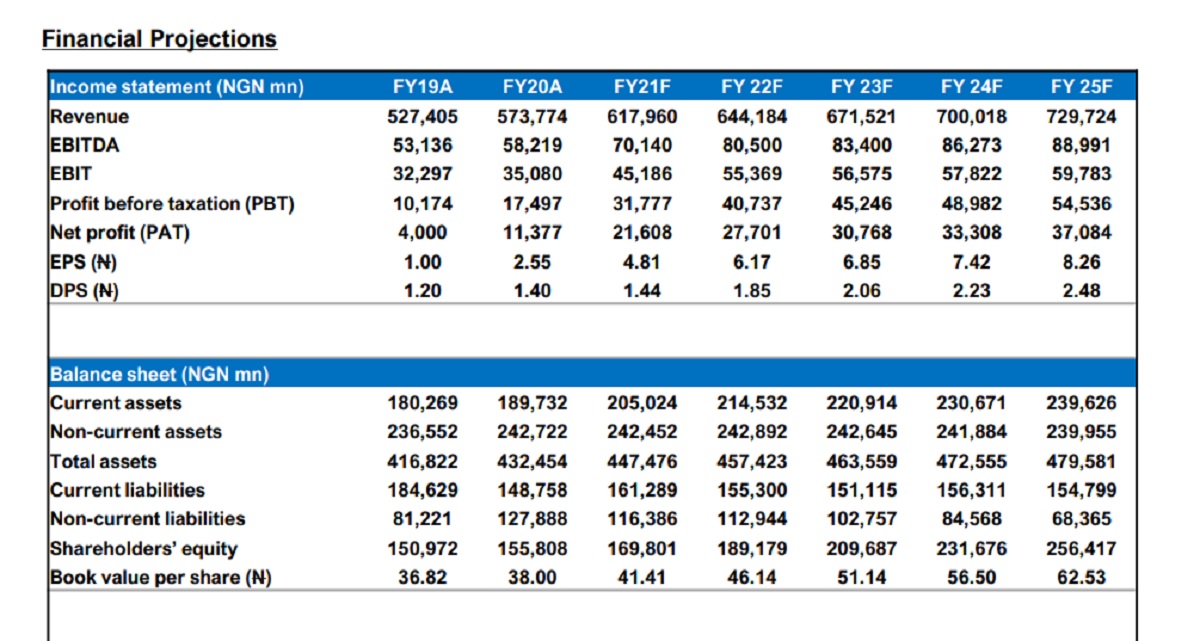 Flour Mills of Nigeria: Impressive Performance across the Business Segments

PAN RESEARCH - Flour Mills of Nigeria (FMN) has been consistently benefiting from the closure of the land borders since August 2019. However, in...
Read more