Nigeria’s external merchandise trade (Foreign trade) declined by 27.30% to N6.24 trillion in Q2 2020 compared to N8.59 trillion in the preceding quarter, according to the National Bureau of Statistics (NBS).

The structure of imports under this category showed that Machinery and transport equipment accounted for the largest share of imports, at N1,598.8billion or 39.7% of total imports, followed by Chemicals and related products, valued at N776.3billion or 19.30% and Food and Live Animals worth N648.6billion or 16.1% among others.

Exports by section revealed that mineral products accounted for the largest portion of exports, amounting to N1,872.4billion or 84.35%, mainly due to the crude oil component. This section was followed by Vehicles aircraft and parts (N221.2billion or 9.96%) and others.

All regions recorded declines in the value of exported goods during the quarter, although China and Japan each recorded increased export activity.

Other Agricultural exports were Sesamum seeds exported to Japan (N6.0 billion) and to China, worth N2.3billion. Also, Cashew nuts were exported to Vietnam, worth N12billion.

In terms of imports, Durum wheat worth N41billion was imported from the United States, Russia (N28.8billion) and Latvia (N24.5billion).

The value of total trade in solid mineral goods stood at N30.5billion in Q2, 2020, comprising an import component of N28.97 billion and an export component of N1.6billion. The major products exported under this sector were Cement clinkers, exported to Senegal, valued at N 0.44billion. This was followed by Manganese ores and concentrates exported to China,  worth N0.42billion and Lead ores and concentrate exported also to China, and worth N 0.39billion.

In terms of imports, plasters of Calcined Gypsum was mainly imported from Turkey, worth N4billion and Egypt (N2.5billion). There was also the import of Gypsum from Spain worth N3.78billion and Crude salt from Brazil worth N3.6billion.

The value of manufactured goods trade in Q2, 2020 stood at N3,040.3billion. Out of this, the export component accounted for N254.2billion. The products that drove up Manufactured export were light vessels, Fire floats, floating Cranes exported to Spain in the value worth N129billion. There were also exports of vessels and other Floating structures to Cameroun (N32.8billion), Equatorial guinea (N36.9billion) and Singapore(N7.5billion).

Export trade on manufactured goods by Region showed that goods were exported mainly to Europe (N137.1billion) and within Africa (N96.98billion). On the other hand, manufactured imports stood at N2,786.2billion.

The main drivers were used vehicles imported from the United States (N116billion), Netherlands (N28.5billion) and Brazil (N24.7billion). Other goods imported under this category were Motorcycles from India (N66.6billion) and China (N25.4billion).

On the other hand, the import intensity index registered against Germany during the quarter was very low in all the months of April (0.65), May (0.67), and June (0.47).

Trade by Mode of Transport

The majority of commodity exported out of Nigeria were transported via water This was reflected in the value of exports by water in Q2,2020. Water transport accounted for N2,214.3 billion or 99.76% of total exports. Air transport contributed N1.1billion or o.o5% while Others accounted for N4.2billion or 0.19%.

Similarly, for imports, most goods brought into the country arrived via water transportation means, accounting for N3,768.2billion or 93.67% of the value of total imports. Another major mode of transport used was Air, which accounted for goods valued at N245.5billion or 6.1%.

KUALA LUMPUR, MALAYSIA - Media OutReach - 1 March 2021 - CERTAINTY, a brand under Disposable Soft Goods (DSG) has recently unveiled the concept of Activities of Daily Living (ADL) to assist Malaysians in their purchasing behavior, primarily for its adult diaper selection. ADL is a commonly used term in the healthcare industry to refer to people's daily life activities. ADL consists of 6 main activities which include eating, bathing, getting dressed, toileting, mobility and continence. With this new concept brought forth, DSG designed its CERTAINTY adult diapers that cater to the needs of the users, based on users' mobility condition. 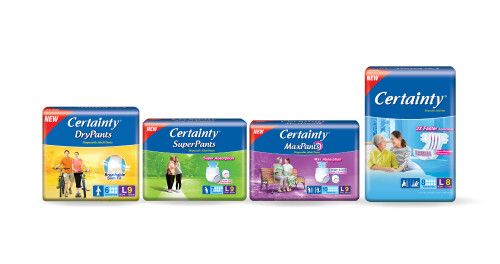 Depending on the mobility condition of the user, the selection of the adult diapers is largely divided into 'light to moderate' or 'moderate to heavy' incontinence. Users who can walk independently or walk with walking aid, are generally having 'light to moderate' incontinence. Whereas users who need assistance or are bedridden, they normally have 'moderate to heavy' incontinence. Icon of the mobility condition and level of absorption are printed on the packaging to help consumers to choose the right type of adult diaper.

"We are very excited with this launch of the ADL care concept to Malaysian market. Applying the concept in our product design and development will certainly help users to select the right types of adult diapers to manage the issue of urinary incontinence." said Daigo Fujiwara, Sales and Marketing Director.

"Incontinence is not a disease. It is a symptom or a sign that some part of your body is not functioning properly. We believe it's timely for us to introduce our range of adult diapers with the ADL care concept to cater to the increasing demand. The concept helps users to manage their incontinence issue as well as a guide for their caretakers to make the right choice in product selection." added Daigo.

Based on the 6 (six) levels of the ADL care concept (from ADL 0 -- ADL 5), Certainty guides users to better understand their user's mobility conditions, thereby helping them to determine the right fit based on their urinary incontinence issue. With that, CERTAINTY adult diapers are now classified into 4 different types. The CERTAINTY DryPants and CERTAINTY SuperPants are catered to people who can walk or move around independently or with minimal walking aids respectively. Whereas, the CERTAINTY MaxPants are for people who require assistance, for example assisted by their caretaker and the CERTAINTY Tape is specially designed for bedridden patients.

With its tagline "For Everyday Confidence", CERTAINTY believes its range of adult diapers are created based on the ADL care concept will allow both caretakers and people with urinary incontinence issues to live independently and confidently. For more information on the ADL care concept, please visit www.certainty.com.my or Facebook page at

Disposable Soft Goods (DSG) started its operation in Malaysia with the setting up of Disposable Soft Goods (M) Sdn Bhd in October 1995, a company involved in the distribution of disposable baby and adult diapers. In July 1999, DSG set up its manufacturing plant, DSG (Malaysia) Sdn Bhd, in Glenmarie, Shah Alam. In 2013, DSG shifted to a fully integrated warehouse and manufacturing facilities located at Teluk Panglima Garang.

On 26 September 2018, Unicharm Corporation, a leading Japanese International Company that manufactures disposable hygienic products specializing in baby diapers, adult incontinence care, feminine hygiene, pet care and clean & fresh, has since acquired DSGT and its subsidiaries including DSG Malaysia. The management team of Unicharm and DSG is working collaboratively in accelerating the dramatic growth of DSG business.

From a start-up with a total workforce of only 57 employees, the company has grown and expanded its business operation with a workforce of more than 350 employees in 2020. DSG's key brands are Certainty for adult diapers, PetPet and Fitti for baby diapers.

The Nigerian Bureau of Statistics (NBS) said the average fare paid by commuters for bus journey within the city increased by 3.61% month-on-month and by...
Read more

The National Bureau of Statistics (NBS) says that the average price of 1 dozen of Agric eggs medium size increased year-on-year by 6.64% and...
Read more