Against the backdrop of the COVID-19 pandemic, Nigeria’s total trade in the first half of the year plummeted 12% from one year ago, the National Bureau of Statistics (NBS) reported. Although trade flows were lower, imports were higher by 11% y/y in the period while exports declined considerably (-31% y/y).

The weaker contribution of crude oil was due majorly to the coronavirus induced slump in oil prices. The decline in crude oil’s composition of exports resulted in the increase in the composition of non- crude oil and non-oil exports, even though the value of non-crude oil exports declined on an annual basis by 1%. 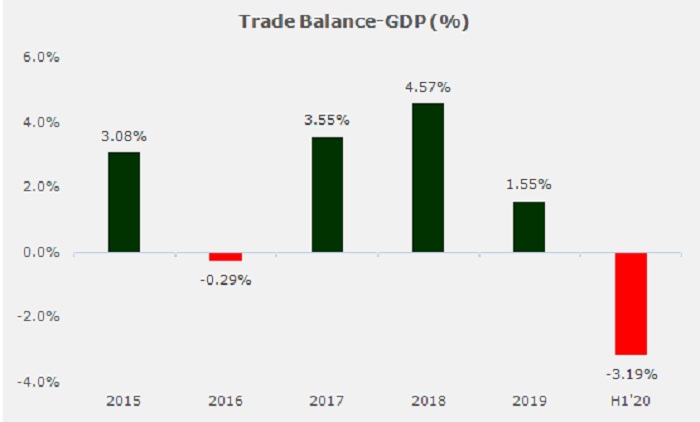 Exports saw a steeper contraction (-46%) than imports (-11%), driven largely by a 47% decline in crude oil exports, on the back of the fall in global oil demand and OPEC production cuts.

As we noted in our Q2’20 GDP report, oil production fell by 27,000 barrels to 1.81mbd, which coincidentally corresponds with the decline seen in 2016. The softer oil prices amplified the resultant gap given the breakdown in compliance with OPEC+ cuts by Saudi Arabia and Russia, as global lockdown measures ebb. As a result, Nigeria recorded its third consecutive quarterly trade deficit as of Q2’20 (-₦1.8 trillion), which was more than four times the Q1’20 gap (-₦0.4 trillion).

Crude oil remained top export commodity while manufacturing imports dominated the import segment at 69% of total. Manufacturing imports rebounded in Jun’20 by 47% y/y, compensation for the 7% decline recorded in Apr’20 when lockdown measures were stringent.

Spain overtook India as the major export trading partner in Q2’20 due to the fall in crude demand in India and the gradual easing of lockdown that occurred in Europe during the quarter. Spain was responsible for 14% of total exports, ahead of Netherlands (10.98%), China (9.93%) and India (8.81%).

China remained our major import partner responsible for 31.41% of imports, trailed by United States (10.66%) and India (8.01%). We believe this was due to surge in medical imports as ventilators, personal protective equipment and other medical items were imported in response to the pandemic.

We expect Nigeria’s foreign trade gap in FY’20 to be the widest as we envisage that recovery in oil demand – and by extension prices – will remain sticky due to a resurgence of coronavirus cases which can slow the pace of the currently anticipated recovery in the global economy.

Although trade data from some advanced economies suggests that global trade could be on a recovery path, we believe Nigeria’s foreign trade flows could take a longer time to recover, given a still weak global growth and demand backdrop. A good indicator is Nigeria’s Purchasing Managers’ Indices – for both manufacturing and non- manufacturing – whose uptrend in Q3’20 suggests that there’s a desire to get back to normalcy, but the back-to-back below-50 readings is indicative of reluctance to really embrace the budding recovery.

The impact of the anticipated deficit in foreign trade could also be accentuated by mandatory compliance with OPEC production cuts, as compensation for earlier overproduction, contributing to the uncertainty of a rebound in the country’s foreign trade flows. As such, trade could be a major drag on economic growth in the year.