The Honourable Commissioner for Information and Strategy, Mr. Gbenga Omotoso has commended Lagos Traffic Radio for its drive and commitment to projecting the Governor Babajide Sanwo-Olu led administration’s policies and programmes through effective dissemination of information to the citizenry.

The Commissioner, who gave the commendation while declaring open the Station’s second management retreat with the theme “Building a High-Performance Team as a Catalyst for Sustaining a World-Class Radio Station”, reaffirmed the State Government’s commitment to a greater Lagos, which is being achieved through the six pillars of the T.H.E.M.E.S Development Agenda. 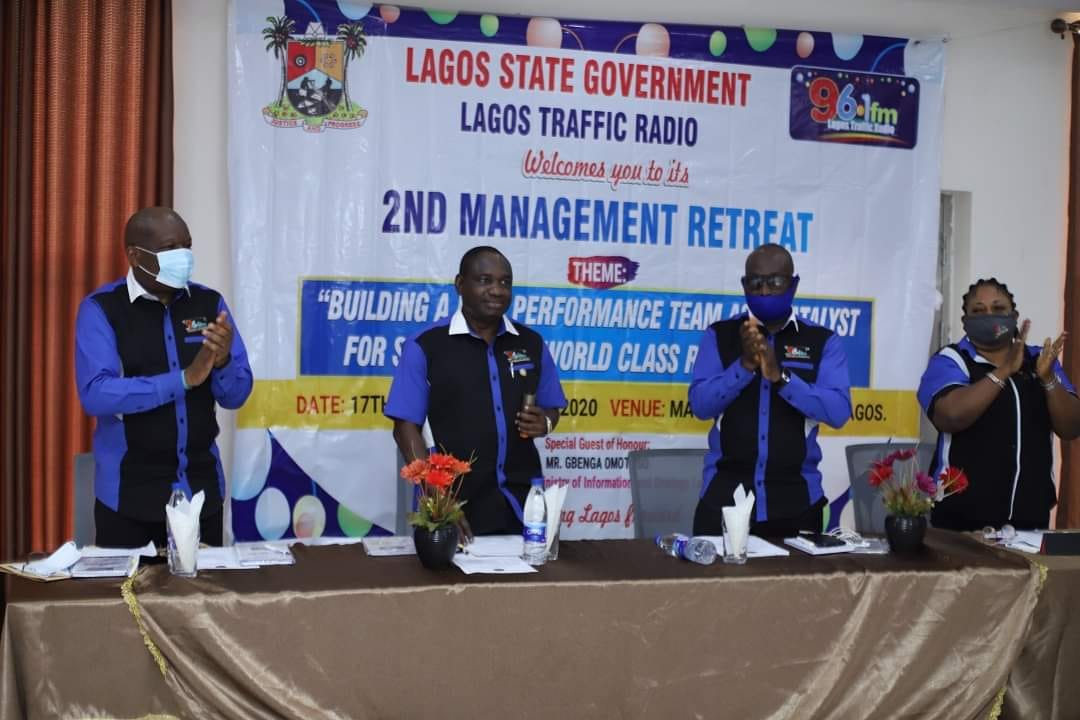 Omotoso explained that the first component of the agenda, which is Traffic Management and Transportation, is the primary concern of Lagos Traffic Radio, urging the leadership to continuously focus on informing and enlightening the masses on government activities.
While noting that the retreat could not have come at a better time where competition for the airwaves has reached an unprecedented level, the Commissioner reiterated the commitment of the present administration to training and retraining of officers as part of efforts to equip them for future engagement and improve public sector service.
The Permanent Secretary, Ministry of Information and Strategy, Mr. Olusina Thorpe, in his goodwill message, said Lagos Traffic Radio has improved from just providing traffic updates to giving up-to-date traffic situation on other modes of transportation, especially water transportation.
Thorpe averred that, over the years, traffic radio has strengthened its integrity and maintains a leadership role in the transport sector by adopting a holistic approach to filing live reports during emergency situations.
He commended the Staff and Management for the obvious improvement brought into the system so far and called for more focus in the rebranding of the station to conform with the Greater Lagos City initiative of the Governor Babajide Sanwo-Olu-led administration.
In his welcome address, the General Manager, Lagos Traffic Radio, Mr. Tayo Akanle, said the retreat was necessary for the station to keep up with strategies for adoption of new technology and development.
He said the major objectives of the retreat include building strong and well-supported plans for change development, integrating a succession plan, evolving strategy for talent development and evaluating management performance in line with the organisation’s mandate.

Akanle pointed out that the fallout of the maiden management retreat earned the station several recognitions, including being nominated among the three best Radio Stations in Nigeria at the 2019 Media Merit Awards.

The General Manager, Lagos Traffic Radio, Mr Tayo Akanle Lagos has declared that the Radio Station is ready to partner any individual, private or...
Read more

In recognition of its enviable role in traffic management, Lagos Traffic Radio has emerged the best radio station in promoting the transportation and logistics...
Read more
- Advertisement -