HONG KONG,
CHINA – Media OutReach – 6 October 2020 – The
Jollibee Group opened Mainland China’s first-ever Tim Ho Wan in Shanghai recently,
marking the Michelin starred restaurant’s entry into one of the world’s largest
economies. Located in the Jing’an Kerry Center, which is just a few minutes
away from the famous Jing’an Temple, Tim Ho Wan
is the latest addition to the portfolio of brands being directly operated by
the Jollibee Group and is a joint venture with the Tim Ho Wan Group.

Shanghai, home to 24 million people and one of the
most populous city centers of the world, welcomed Tim Ho Wan with a packed
waiting list and a long line of customers. The most popular dishes are the
signature Baked BBQ Pork Buns, Rice Rolls, Pork &
Shrimp Dumplings, and the Pan-Fried Radish Cake. Everything on the menu is
always freshly steamed and freshly served following the philosophy of the dim
sum icon.  Tim Ho Wan is often called one
of the most affordable Michelin-starred restaurants in the world, with its Sham
Shui Po branch in Hong Kong being awarded a Michelin star for eleven straight
years.

“The core of Tim Ho Wan is to serve delicious
authentic Hong Kong dim sum to more
people at
a good value for money, and this is why we believe that Tim Ho Wan is a great
addition to the Jollibee Group’s portfolio,” said Jollibee Group CEO Ernesto
Tanmantiong. “Opening in Shanghai, one of the busiest global hubs, is an
excellent starting point for our expansion plans for Tim Ho Wan in Mainland
China, and our near-term goal is to open 100 restaurants in the next 5 years.”

“We are excited to grow the Tim Ho Wan
brand in Mainland China as we leverage on our established network here and
knowledge in food-service,” said Jollibee Foods Corporation China Chairman Carl
Tancaktiong. “Given the response we are seeing, we are planning to open the second store by the
end of this year.  Aside from Shanghai,
we will also open in Beijing, Shenzhen, and Guangzhou.”

Jollibee Group has entered into a joint
venture agreement with the Tim Ho Wan Group to open and operate Tim Ho Wan
restaurants in Mainland China.

Jollibee Group is a
significant investor in Titan Dining LP, the ultimate holding entity of Tim Ho
Wan Pte. Ltd., and has a business venture with award-winning Chef Rick Bayless
for Tortazo, a Mexican fast-casual restaurant business in the United States.

Jollibee Group has been
named the Philippines’ most admired company by the Asian Wall Street Journal
for ten years and was honored as one of ‘Asia’s Fab 50 Companies’ by Forbes
Asia Magazine.

Jollibee Group has grown
brands that bring delightful dining experiences to its customers worldwide, in
line with its mission of serving great tasting food and spreading the joy of
eating to everyone.

Best of the Best: Over 100 Singapore’s elite brands were awarded at the inaugural Reader’s Digest Trusted Brands Awards

SINGAPORE - Media OutReach - 25 February 2021 - More than 100 Singaporean brands are among the selected winners of the Reader's Digest Trusted Brands Awards 2020 in more than 50 categories listed in the recent event. The awards recognise which brands, products and services are best and above the rest in the eyes of the community and cover a host of categories. 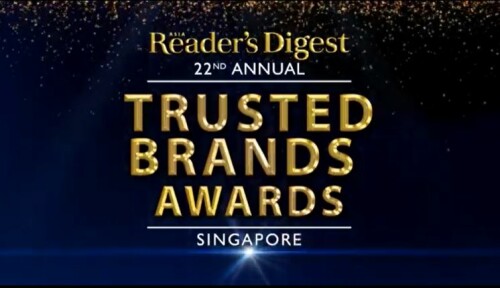 Due to the global pandemic, the traditional awards ceremony could not be held, but Reader's Digest was determined to recognise "success that deserves to be celebrated" says Asia Reader's Digest Editor-in-Chief Louise Waterson. The inaugural virtual awards for Singapore (plus Malaysia and the Philippines) are now live on the website.

Asia Reader's Digest Advertising & Retail Director Sheron White says, for the first time in the award's 23-year history the live celebration had to be cancelled, but all is certainly not lost. "You can sit in the comfort of your own home and enjoy viewing the award winners -- those voted the most trusted by the public," she says.

Reader's Digest commissioned an international leading research company, Catalyst Consultancy and Research, to conduct the survey to determine the most excellent, remarkable and outstanding companies. A total of 1,500 consumers throughout the country were asked to rank companies according to their trustworthiness and credibility, their quality and value, their understanding of consumer needs, their innovation and social responsibility.

Sheron says the awards provide a great indicator for the general public. Purchasing from a company voted the best by Singaporeans gives consumers the confidence that they are making the right choice.

Daikin, meanwhile, is the company you want to know about if looking for air conditioning as, after clocking up 19 wins, this company is the longest-reigning gold winner in the Trusted Brand award history in Singapore. Also, of note, in the latest awards, NTUC Fairprice took away four gold medals and has done so for more than 10 consecutive years in the following categories: rice, cooking oil, tissue, and supermarket and online grocery.

More than 50 categories featured in the Trusted Brands awards, some of which had multiple winners. New categories are added over the years, with Pearl milk tea being an inaugural addition this year. The virtual awards ceremony features a selection of the winners.

All this is also documented in the virtual awards with some of the winners making guest appearances.