Efforts by the Taraba State Government under the leadership of Governor Darius Dickson Ishaku to provide uninterrupted water supply to Jalingo, the state capital and its environs received a boost on Thursday with the ground breaking for the construction of a five million litre water storage facility.

The facility is part of the gigantic Jalingo Primary Water Scheme which is designed to meet the needs of the capital city for water for the next 35 years.

Speaking at the ground breaking ceremony, Gov Ishaku described the construction of the reservoire as a landmark project which will aggressively address the water problem in the state.

The site of the reservoire will be developed to be an attractive tourist centre with a VIP and general restaurant. 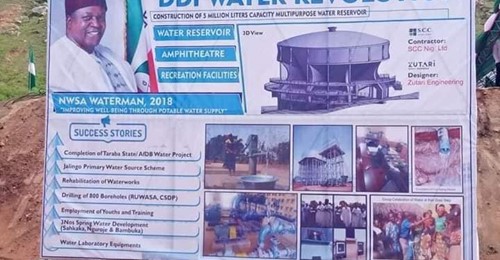 Ishaku said water treatment facilities have been purchased in large quantities to ensure regular supply of water. He said the supply of water is also being commercialised, will be regular and wastage would be drastically curtailed.

He said even with the commercialisation, the needs of the poor would be catered for. 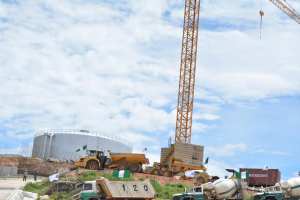 He urged the Water Supply Agency to ensure that every home is serviced and advised those being serviced to endeavour to pay their water bills.

Speaking earlier, Barr. Yusufu Akirikwen, commissioner for Water Resources, said the construction of the reservoir and other related works would mark the last stage towards the completion of the Jalingo Primary Water Supply Scheme.

The Commissioner said the state government has been sufficiently assured by the contractors of the delivery of high quality job.

He pleaded with the people of Taraba State to support the efforts of Government to solve the problem of water supply by owning the facility and protect it.

Also speaking at the ceremony, Engr. Musa Buba Siam, Managing Director of the Taraba State Water Supply Agency described the approach of Governor Ishaku towards solving the water problem in the state as the most pragmatic since the creation of the state.

The ceremony was performed by Governor Ishaku on Mount Jalingo.

– Story by Bala Dan Abu, Special Adviser to the Governor (Media and Publicity)

The site of the reservoire will be developed to be an attractive tourist centre with a VIP and general restaurant.

The Taraba state government has relaxed the 24-hour curfew imposed on Jalingo, the state capital and Wukari local government area. This was disclosed in a...
Read more

Following certain bad happenings in the state and around the country, the Taraba Government has decided to impose a curfew on Jalingo, the state...
Read more