Iconic Scotch brand Johnnie Walker is celebrating 200 years since founder John Walker first threw open the doors to a small grocery store in rural Scotland in 1820, beginning a journey that took Johnnie Walker whiskies to the four corners of the world.

John’s spark, vision and entrepreneurial fire were the impetus to a hugely successful business and ultimately a new future for Scotch whisky. Today, Johnnie Walker whisky is sold in over 180 countries and is the best-selling Scotch whisky in the world. Over the last 200 years, Johnnie Walker has been defined by its dedication to quality and its commitment to progress – symbolised by the famous Striding Man logo. 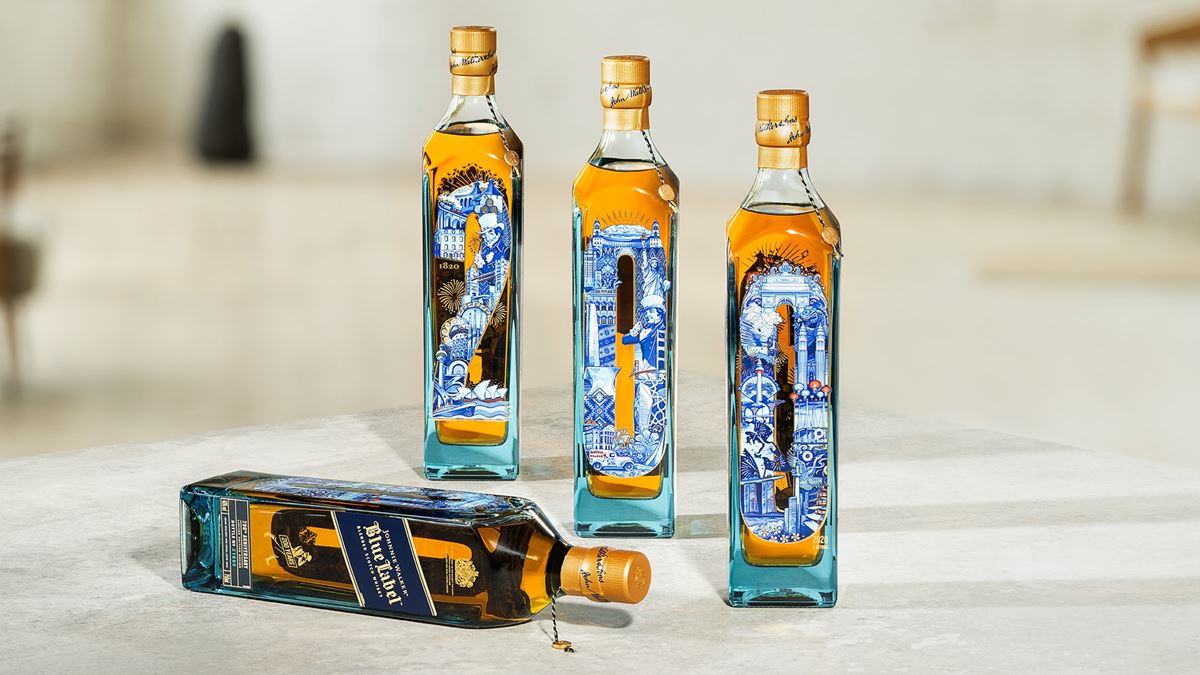 “The Johnnie Walker brand is truly one which has stood the test of time, and the knowledge that Johnnie Walker cuts across cultures, borders, languages, and tastes is a humbling thought. Everyone who works on Johnnie Walker is dedicated to upholding our reputation for quality and continuing our founder’s spirit of innovation. This 200-year milestone allows us to pause and reflect on how far we’ve come already, as well as what more we want to achieve in the next 200 years.”

This year and into 2021, Johnnie Walker will be marking this incredible milestone with a series of exciting cultural events, exclusive limited-edition product releases and the opening of a new multi-sensory, immersive Johnnie Walker visitor experience in Edinburgh.

The new Johnnie Walker experience, which is part of a wider £185 million Diageo investment into Scotch whisky tourism, will guide visitors through the 200-year history of Johnnie Walker and take them on a journey through the flavours of Scotland. Rooftop bars will provide visitors with stunning views of Edinburgh Castle and across the city skyline.

Johnnie Walker also welcomed the release of four exclusive new Johnnie Walker limited editions hitting shelves globally. Each exclusive release – a new bottle design and three newly crafted whiskies – is a celebration of the incredible journey, pioneering spirit and dedication to quality that was started by John back in those early days.

Next month, the Discovery Channel will air a feature documentary directed by Oscar-nominated filmmaker Anthony Wonke exploring what has led Johnnie Walker to become an icon in popular culture. And Canongate Books have recently announced the publication of A Long Stride by Nicholas Morgan, a book charting the remarkable story of how Johnnie Walker became the world’s number one Scotch.

““Celebrating the 200th anniversary of the Johnnie Walker journey is such a proud moment for us all. The company was pioneered by three generations of the Walker family and those who followed in their footsteps, and the business continues to embrace their distinctive spirit. In looking back and celebrating the first steps John Walker took when he founded the business, we are inspired to look forward to the next 200 years as we honour the legacy of John and his family’s achievements and open the door to new possibilities in Scotch for Johnnie Walker.”

Following the art film STONE SKIPPING, THE BOX is the next film production of Studio Take, which was founded by veteran movie producer, Mr. Song Dae‐chan.

THE BOX is about the musical journey of an aspiring singer and a once popular producer.

Directed by Yang Jung Woong, the Executive Producer of the 2018 PyeongChang Winter Olympics opening and closing ceremonies, THE BOX stars EXO's Chanyeol who plays the aspiring singer and Jo Dal Hwan who acts as the once popular producer. This is Chanyeol's first lead role for a Korean commercial film. Jo Dal Hwan is known for his role in SECRET HEALER (2016), TRAFFICKERS (2012) and THE CON ARTISTS (2014).

Spackman Entertainment Group Limited ("SEGL" or the "Company"), and together with its subsidiaries, (the "Group"), founded in 2011 by Charles Spackman, is one of Korea's leading entertainment production groups. SEGL is primarily engaged in the independent development, production, presentation, and financing of theatrical motion pictures in Korea. According to Variety, Korea was the world's fourth largest box office market in 2019, behind only North America, China and Japan.

The Group also invests into and produces Korean television dramas. In addition to our content business, we also own equity stakes in entertainment-related companies and film funds that can financially and strategically complement our existing core operations. SEGL is listed on the Catalist of the Singapore Exchange Securities Trading Limited under the ticker 40E.

SEGL's wholly-owned Zip Cinema Co., Ltd. ("Zip Cinema") is one of the most recognised film production labels in Korea and has originated and produced some of Korea's most commercially successful theatrical films, consecutively producing 10 profitable movies since 2009 representing an industry leading track record. Recent theatrical releases of Zip Cinema's motion pictures include some of Korea's highest grossing and award-winning films such as CRAZY ROMANCE (2019), DEFAULT (2018), MASTER (2016), THE PRIESTS (2015), COLD EYES (2013), and ALL ABOUT MY WIFE (2012). For more information on Zip Cinema, do visit http://zipcine.com

SEGL also owns Novus Mediacorp Co., Ltd. ("Novus Mediacorp"), an investor, presenter, and/or post-theatrical distributor for a total of 79 films (58 Korean and 21 foreign) including ROSE OF BETRAYAL, THE OUTLAWS and SECRETLY, GREATLY, which was one of the biggest box office hits of 2013 starring Kim Soo-hyun of MY LOVE FROM THE STARS, as well as FRIEND 2: THE GREAT LEGACY. In 2012, Novus Mediacorp was also the post-theatrical rights distributor of ALL ABOUT MY WIFE, a top-grossing romantic comedy produced by Zip Cinema. In 2018, THE OUTLAWS, co-presented by Novus Mediacorp broke the all-time highest Video On Demand ("VOD") sales records in Korea. For more information on Novus Mediacorp, do visit http://novusmediacorp.com.

The Company owns a 100% equity interest in Simplex Films Limited ("Simplex Films") which is an early stage film production firm. The maiden film of Simplex Films, JESTERS: THE GAME CHANGERS (2019), was released in Korea on 21 August 2019. Simplex Films has several line-up of films including A BOLT FROM THE BLUE (working title).

The Company owns a 100% equity interest in Take Pictures Pte. Ltd. ("Take Pictures") which produced STONE SKIPPING (2020) and shall release THE BOX and GUARDIAN (working title) in 2021 tentatively.

The Company owns a 20% equity interest in The Makers Studio Co. Ltd., which plans to produce and release four upcoming films, the first of which will be THE ISLAND OF THE GHOST'S WAIL, a comedy horror film.

Our films are theatrically distributed and released in Korea and overseas markets, as well as for subsequent post-theatrical worldwide release in other forms of media, including online streaming, cable TV, broadcast TV, IPTV, video-on-demand, and home video/DVD, etc. We release all of our motion pictures into wide-theatrical exhibition initially in Korea, and then in overseas and ancillary markets.

The Company holds an effective shareholding interest of 43.88% in Spackman Media Group Limited ("SMGL"). SMGL, a company incorporated in Hong Kong, together with its subsidiaries, is collectively one of the largest entertainment talent agencies in Korea in terms of the number of artists under management, including some of the top names in the Korean entertainment industry. SMGL operates its talent management business through renowned agencies such as MSteam Entertainment Co., Ltd. (Son Ye-jin, Lee Min-jung, Ko Sung-hee), UAA&CO Inc. (Song Hye-kyo, Yoo Ah-in, Park Hyung-sik), Fiftyone K Inc. (So Ji Sub, Ok Taec-yeon), SBD Entertainment Inc. (Son Suk-ku), and Kook Entertainment Co., Ltd. (Kim Sang-kyung, Kim Ji-young). Through these full-service talent agencies in Korea, SMGL represents and guides the professional careers of a leading roster of award-winning actors/actresses in the practice areas of motion pictures, television, commercial endorsements, and branded entertainment. SMGL leverages its unparalleled portfolio of artists as a platform to develop, produce, finance and own the highest quality of entertainment content projects, including theatrical motion pictures, variety shows and TV dramas. This platform also creates and derives opportunities for SMGL to make strategic investments in development stage businesses that can collaborate with SMGL artists. SMGL is an associated company of the Company.

The Company owns a 100% equity interest in Frame Pictures Co., Ltd. ("Frame Pictures"). Frame Pictures is a leader in the movie/drama equipment leasing business in Korea. Established in 2014, Frame Pictures has worked with over 25 top directors and provided the camera and lighting equipment for some of Korea's most notable drama and movie projects including ITAEWON CLASS (2020), HOW TO BUY A FRIEND (2020), KIM JI-YOUNG, BORN 1982 (2019), FOUR MEN (2019) and ASADAL CHRONICLES (2019).

We also operate a café-lounge called Upper West, in the Gangnam district of Seoul and own a professional photography studio, noon pictures Co., Ltd.

For more details, do visit http://www.spackmanentertainmentgroup.com/

The launch marks 200 years since John Walker first threw open the doors to a small grocery store in Scotland First crafted in a humble...
Read more

Diageo to unveil Johnnie Walker whisky in paper bottles in 2021

Diageo is launching a new campaign called Craftswomen today, a program that celebrates the women behind many of its iconic spirits. More than just...
Read more
- Advertisement -