Ford produced solid financial results in the third quarter of 2020 through a combination of great operating execution; benefits from focusing on its strengths in high-demand, profitable vehicles; and a reversal of business effects from the coronavirus pandemic.

“We know that there’s huge value to be unlocked as we turn around our automotive operations,” said Jim Farley, Ford’s president and CEO. “There will be additional opportunity when we start growing again, which we will do with products and services customers can’t resist.” 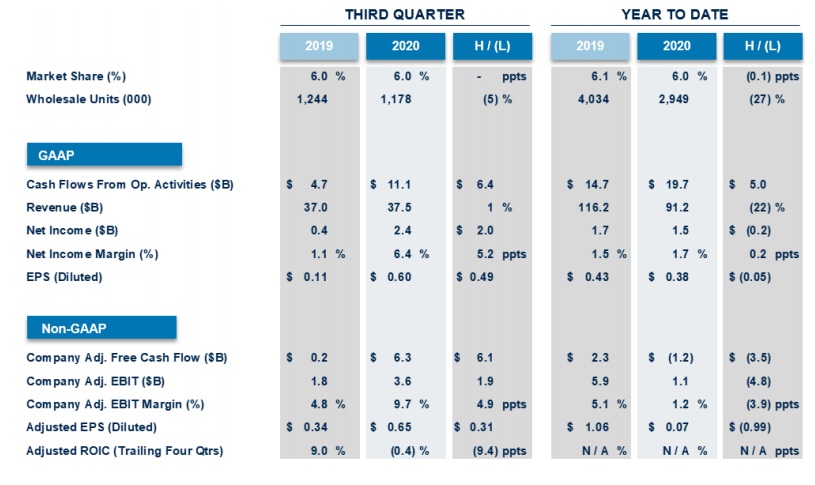 According to Farley, the robust third-quarter performance reflected Ford’s better execution and benefits from the company’s decision two years ago to reallocate capital to franchise strengths – pickup trucks, SUVs, commercial vehicles and iconic passenger vehicles – and phase out unprofitable sedans. The company made the most of stronger than expected demand vehicle demand and net pricing, with inventories limited following the virus-related, first-half factory shutdowns.

Those factors – together with Ford Credit’s strongest performance in 15 years – led to total company adjusted EBIT (earnings before interest and taxes) margin of 9.7%. That was nearly five points higher than in prior year and above the 8% target Ford intends to achieve and sustain over time. Automotive EBIT margin was 7.6% of revenue – 12.5% in North America – amid favourable third-quarter net pricing.

“We haven’t suddenly fixed the issues in our automotive business, but we have a clear
turnaround plan to get that done,” said Farley. “That work is underway and we’re making progress.”

The plan, which Farley outlined on October 1, his first day as president and CEO, includes:

Ford generated $6.3 billion in adjusted free cash flow during the third quarter, helped, as expected, by a $4 billion rebuild of supplier payables as vehicle production reached pre-pandemic levels. The company ended the period with cash of nearly $30 billion and total liquidity of more than $45 billion after fully repaying $15 billion in revolving credit drawn down in Q1 to maintain financial flexibility in the early days of the pandemic.

“Challenges from the coronavirus were real and some risks still linger,” said John Lawler, Ford’s CFO. “Throughout the pandemic, we’ve prioritized the safety of our people, the needs of our customers and the strength of our balance sheet, and that helped us post a solid quarter.”

In North America, Ford’s automotive business gained one point of market share; in the US, F-Series trucks picked up 1.7 points of industry share, to more than 35%. The regional mix of popular and profitable Ford trucks and commercial vehicles reached 57% while volumes of sedans continued to trend deliberately lower.

Ford’s Europe business continued to derive benefits from its restructuring program, with a cumulative $1 billion reductions in structural costs since 2018. SUVs accounted for more than 30% of Ford’s vehicle mix in Europe, nearly nine points higher than in the same quarter a year earlier. The regional business would have been profitable in the third quarter excluding effects associated with a supplier-quality issue with the new Kuga plug-in hybrid electric vehicle, among them the expense for CO2 pooling to comply with European emissions regulations. 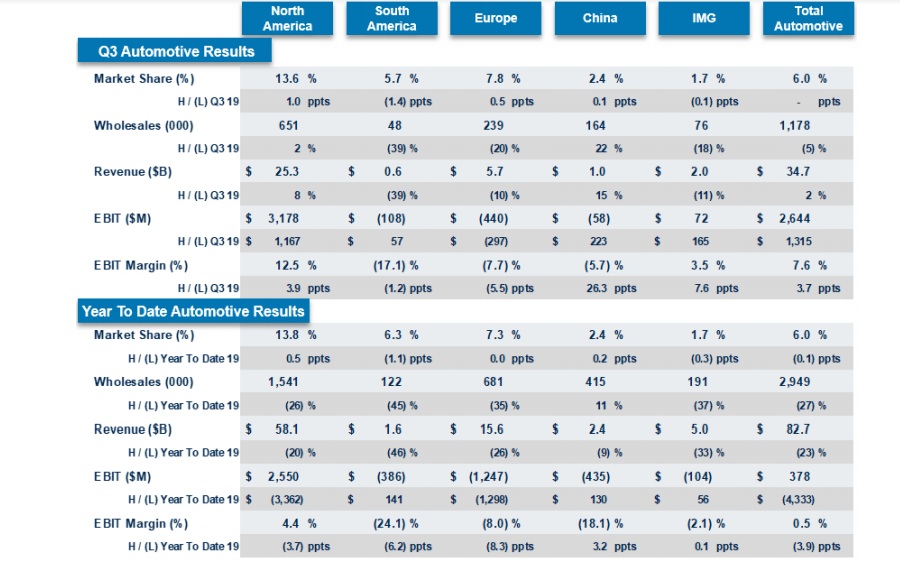 Wholesale product shipments in China were up 22% as the company’s mix of SUVs increased 13 points, to 36%. That strength was driven by locally built versions of the Explorer, Escape, and the luxury Lincoln Aviator and Corsair, and represented the third quarter in a row of year-over-year gains in market share. The third quarter also was the second straight of EBIT improvement.

In South America, Ford posted its fourth straight year-over-year improvement in quarterly EBIT, with pricing increases and cost reductions helping to mitigate pressures from inflation and currency. The International Markets Group was profitable despite pandemic-related industry declines in vehicle shipments.

In the fourth quarter, Ford is launching the next three in a game-changing series of all-new vehicles: F-150, including a hybrid electric-powered version; Bronco Sport, ahead of the return of the reimagined full-size Bronco next year; and the all-electric Mustang Mach-E. With software and hardware engineering, suppliers and manufacturing for all of them “go,” the three vehicles are now coming off production lines.

Farley said electric vehicles are fundamental to the company’s future across its lineup -including in commercial vehicles, and the Lincoln line. Ford will reveal a new, all-electric Transit van for global markets in November.

“By the end of the year, customers will be able to choose from 12 hybrid and fully electric vehicles around the globe and there is much more to come, including developing a complete EV ecosystem,” he said. “We intend to set Ford apart in EVs with capabilities that reach across our product portfolio, like an all-electric F-150 in 2022 that will be a rugged and affordable work pickup, not just a lifestyle vehicle.”

In the third quarter, Ford Mobility, which is building fourth-generation autonomous test vehicles with the latest self-driving technology, produced its first AV-related revenue from a fleet operations pilot in Austin, Texas. At the same time, the company is strategically expanding its Spin scooter business in the U.S., U.K. and Germany.

Ford Credit’s quarterly earnings before taxes were its highest since 2005, up one-third to
$1.1 billion and contributing to a continued strong balance sheet. Besides its financial
contributions, Farley said Ford Credit’s closeness and insight to customers is a “secret weapon,” providing additional reasons for those customers to choose and stay with Ford. During the pandemic, Ford Credit has provided options for deferring vehicle payments and other programs, and incentives to come into showrooms or shop online.

Ford’s current expectations for the fourth quarter include:

Taken together, Ford anticipates fourth-quarter adjusted EBIT to be between break-even and a $500 million loss, down from both the third quarter and year-ago period. Based on that Q4 guidance, the company now expects positive adjusted company EBIT for full-year 2020.

The guidance assumes no meaningful change to the current economic environment, continued steady improvement in the stability of the global automotive supply base, and no significant post-Q3 pandemic-related disruptions to production or distribution.

Dec. 31, 2020 – Ford Motor Company and Mahindra & Mahindra have mutually and amicably determined they will not complete a previously announced automotive...
Read more
- Advertisement -