Sony Corp’s earnings during FY2020 Q2 benefitted from the robust performance of its gaming segment.

According to Sony’s earnings report for the quarter, which ended in September 2020, its PlayStation-related revenue totalled 507 billion yen ($4.9 billion). Operating profit for the segment amounted to 105 billion yen ($1 billion). 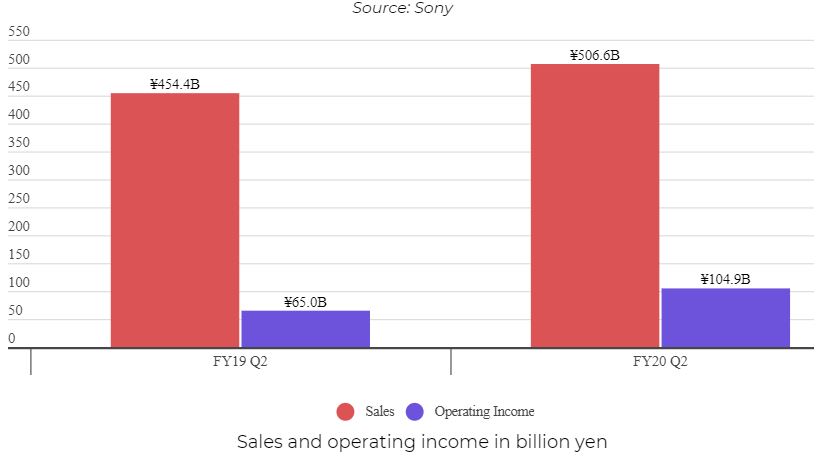 Based on the research data analyzed and published by Safe Betting Sites, in comparison to a similar period in 2019, Sony gained an increase of 52% in revenue and 40% in operating profit.

Seeing as the quarter ended just before the launch of PlayStation 5, typically, there would be a negative impact on performance. True to this, Sony highlighted a drop in profits arising from increased costs. Furthermore, there was a revenue decline due to decreasing PS4 sales.

However, the period was also marked by an increase in PlayStation Plus subscriptions as well as digital game sales. These more than made up for the anticipated decline. 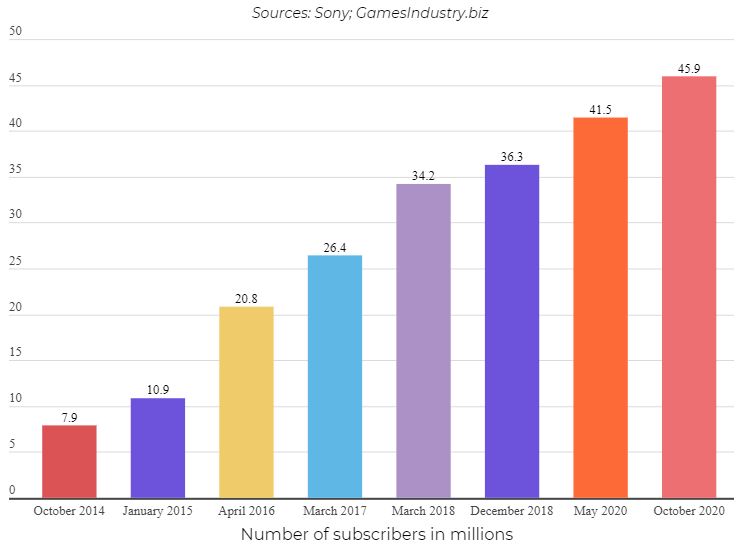 According to data published by GamesIndustry.biz, PlayStation Plus had 41.5 million subscribers as of May 2020. At the end of October 2020, Euro Gamer placed the number at 45.9 million, up by 9 million year-over-year (YoY).

Moreover, digital games accounted for 59% of all PlayStation sales, a considerable increase from 55% in 2019.

The PlayStation 5 (PS5) could be the first next-generation console that will not push Sony’s gaming division to an annual loss during its launch year.

In fact, Sony revised its profit forecast for the full year upwards. It raised its annual profit forecast to 700 billion yen ($6.7 billion), which would translate to a 13% increase over the previous outlook.

In the period leading up to that time, Sony is targeting sales of 7.6 million PS5 console units or more. However, there is a possibility that in the short term, Sony’s revenue and profit will be hampered by a supply-demand imbalance.

According to Sony Interactive Entertainment CEO, Sony sold as many PlayStation 5 consoles in the first 12 hours of pre-orders in the US as it did in PS4’s first 12 weeks. He added that not everyone who wants the console once it launches might get one.

According to a Bloomberg report, the console is in high demand on the online black market and is outperforming Microsoft’s Xbox Series X.

Citing data from ShelfTrend, which tracks eBay activity, the report revealed that since September 2020, 9,300 pre-orders have been traded on the site. That was almost double the number of Xbox Series X trades.

Another research firm, MarkSight, revealed that there was an average of 17.8 bids on every PS5 auction, against Xbox’s 12.3.

During Q2 2020, Sony’s top PS4 release was Ghost of Tsushima. Following its July launch, the game sold 2.4 million units globally within the first three days. It thus became one of PS4’s fastest-selling new IP on PS4.

In Japan, the action-adventure game published by Sucker Punch Productions sold 212,920 units within that period. Within the first month of release, it sold a total of 1.9 million digital units.

For a bit of context, the publisher’s previous title, Infamous Second Son, sold 1 million copies in nine days back in 2014. Ghost of Tsushima is the final major first-party game being released on PS4.

During its launch month, it was the best-selling software title in the US according to The NPD Group. Following its July 17 launch, it instantly became the fifth best-selling game in the US in 2020.

Its sales record topped Horizon Zero Dawn, which sold 2.6 million units in a span of two weeks. However, it fell short of Marvel’s Spider-Man, which sold 3.3 million copies in the first three days of launch.

At the time of its launch, Spider-Man beat God of War, which had sold 3.1 million within a similar timespan. The current three-day record holder is The Last of Us Part 2, whose sales totaled 4 million in three days.

SONY, PayPal, Mahindra and over 50 others commit to common ESG metrics

The global smartphone Image sensor market led by Sony reached a total revenue of $6.3 billion in H1 2020, according to the Strategy Analytics...
Read more

Sony And C.S.A. Announce Joint Venture – First Of Its Kind In Africa

Hyundai Motor Company and Sony Pictures Entertainment today announced they have entered into a unique and unprecedented multi-picture promotional partnership that will feature the automaker’s new models and technologies in upcoming...
Read more
- Advertisement -