The increase in headline inflation marks the 14th-consecutive uptrend since September 2019 and the highest rate printed since February 2018. This upsurge was majorly driven by the rise in staple food prices. 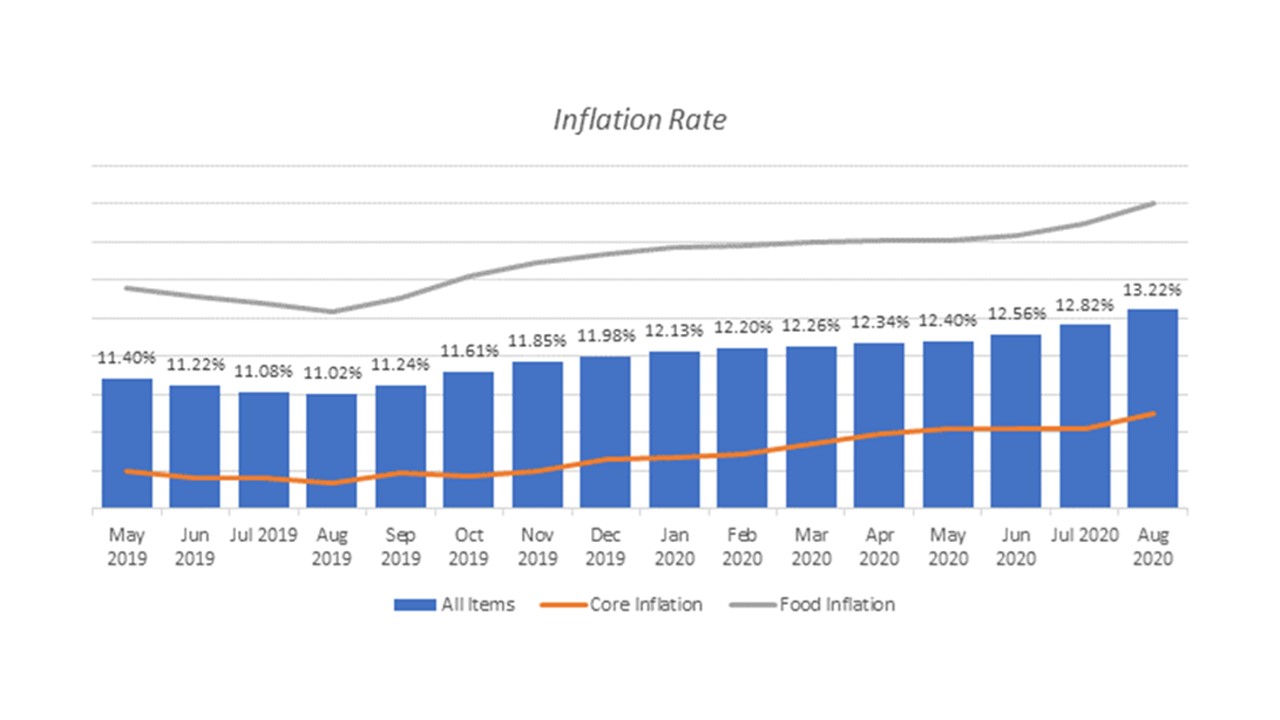 October marks the 14th consecutive monthly increase as well as the highest rate of inflation we have seen in over two years. This was driven by lingering impacts of the border closure on food prices, the passthrough effect of exchange rate pressure and the persistent uptick in prices in the transportation space, most notably in air transport.

The food index rose by 1.96% MoM, a 0.08% increase from the rate of 1.88% that was recorded in the previous month. The yearly average rose to 15.42% this month, 0.29% greater than 15.13% recorded in the previous month. This rise in the food index was caused by an increase in prices of staple food items, as the problems imposed by last year’s border closure was further exacerbated by dollar restrictions put in place by the CBN.

Inflation remained persistent in its uprise in October, with increases recorded in both the food and core subindices. The pressure in food prices can be traced to the spillover effects from the land border closure from last year, but the problems have been deepened by the disruptions to food production due to banditry and adverse weather conditions, coupled with restricted access to FX for food importers.

The core segment has also witnessed renewed pressure, riding majorly on the back of the increments seen in the price of premium motor spirit, but further worsened by the demand push inflation in the health space and the heightened cost of transportation following the gradual economic reopening.

Our expectations for inflation remain gloomy, as the softened stance of the government on the land border closure would not be sufficient to change the trajectory of prices. Our expectations of a further uptick should hold, given the currently active drivers for both the food and core subindices and the expected impact of the characteristic year-end spending.

Nevertheless, even as the Central Bank is heading towards another missed inflation target in 2020, exceeding the 6% – 9% target for the fifth year, we do not expect any substantial hawkish position at next week’s MPC meeting.

Rather, the Central Bank is expected to keep the benchmark interest rate constant at 11.50%, keeping its focus on the current drive to resuscitate the economy, given the apparent insufficiency of the available monetary the instrument to curb the rise in prices.

As widely anticipated, headline inflation for the month of September increased for the seventh consecutive month by 47bps to 13.71% YoY, 58bps shy of...
Read more

Headline Inflation Ticked up by 49 bps to 13.71% in September