Emotional roadster look combined with supersports riding dynamics – that’s what the new BMW S 1000 R is all about. The Dynamic Roadster based on the S 1000 RR enters a new dimension.

“With our new S 1000 R, we have tried to preserve the strengths of its predecessor and to take into account the potentials known to us from press and customer feedback in the new S 1000 R. The team also made perfect use of the benefits provided by the new architecture” 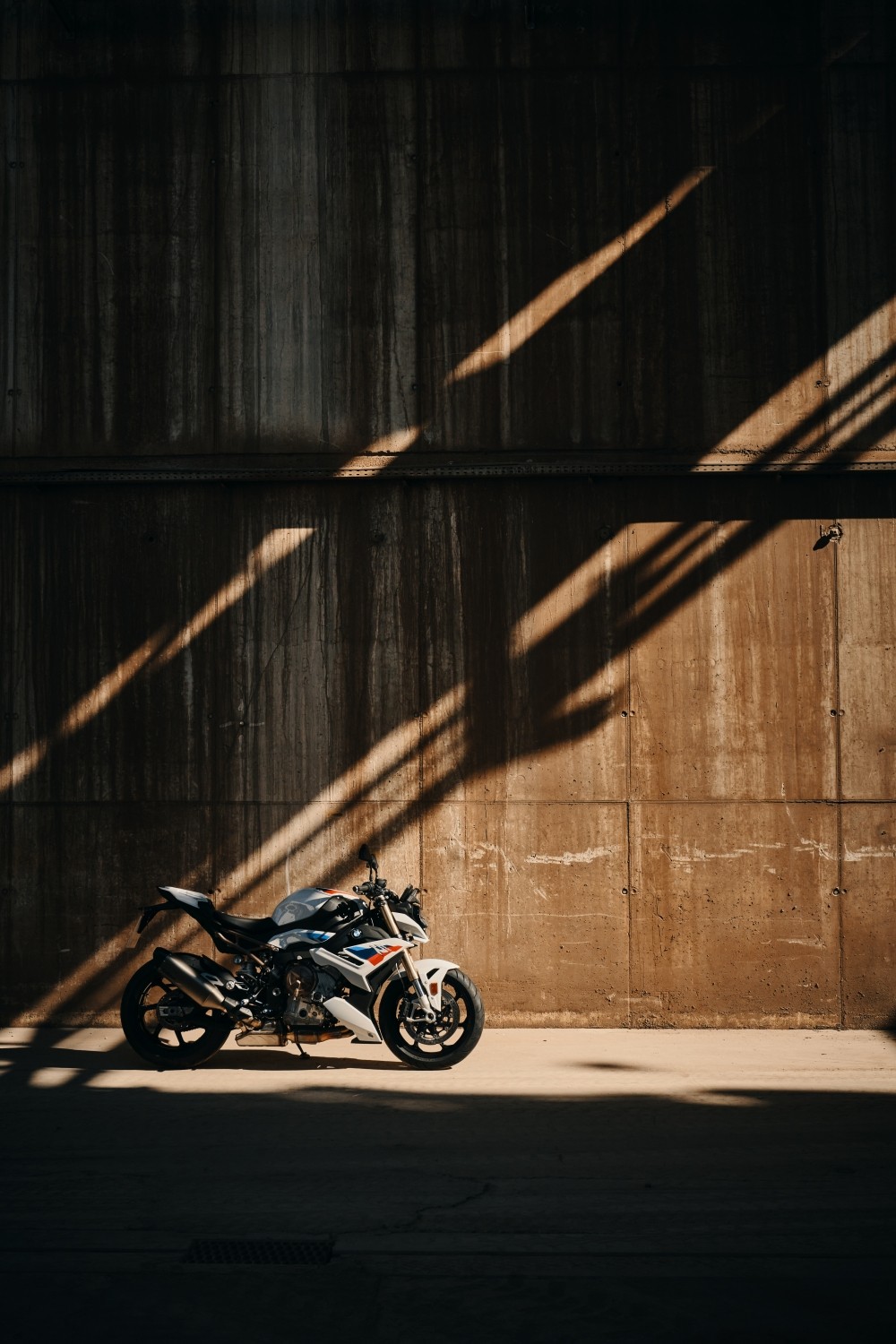 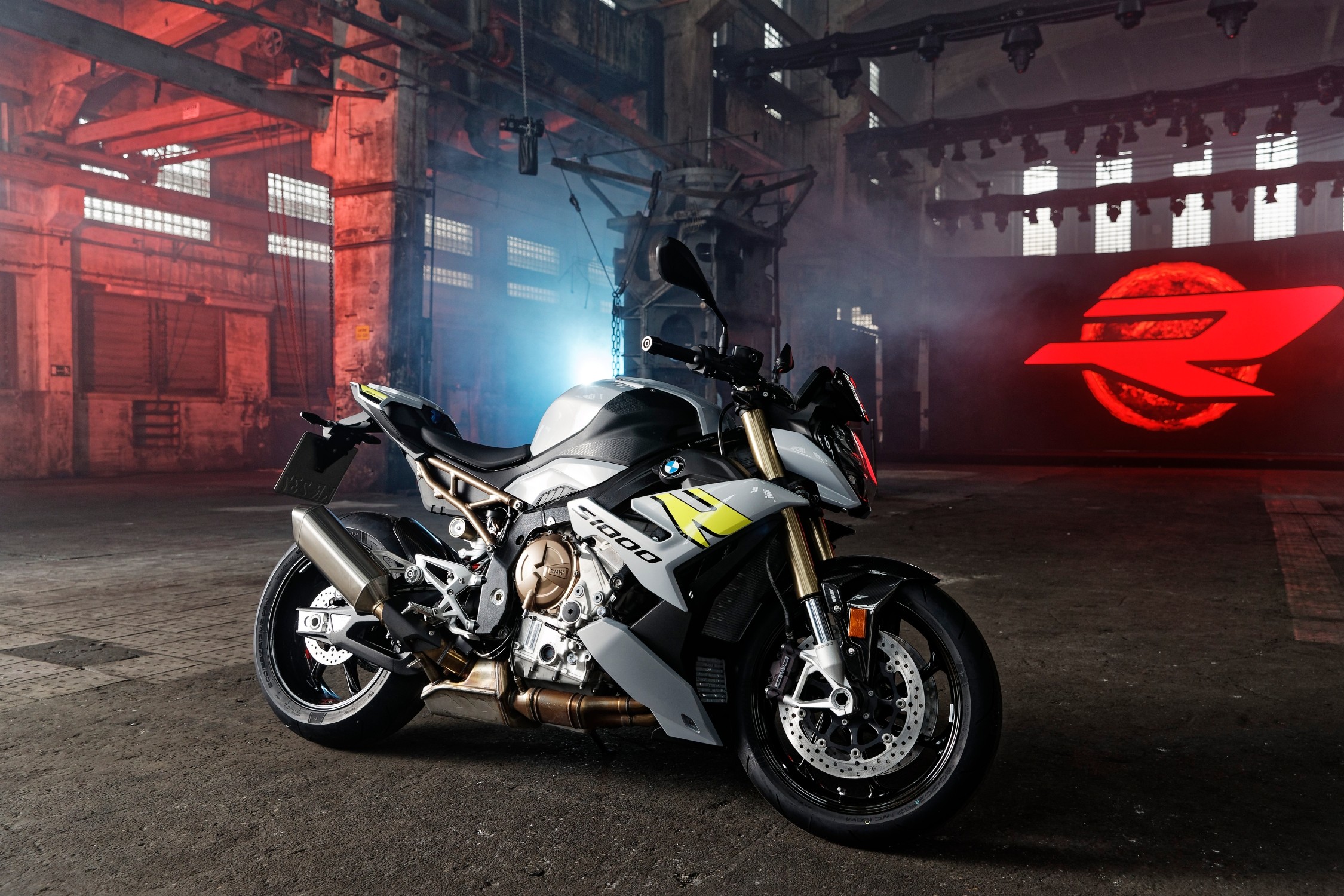 Emotional roadster look combined with Supersports riding dynamics – that’s what the new BMW S 1000 R is all about. Derived directly from the Supersports S 1000 RR in the key areas engine and chassis, the dynamic roadster offers the same innovative technology. The close kinship to the “RR” can be seen from every angle. With its reduction to the essentials, the new S 1000 R offers an unprecedented dynamic response. Thanks to its acceleration-optimised 121 kW (165 hp) peak output combined with the unrivalled low weight of 199 kg (DIN) as well as ABS Pro, Dynamic Traction Control (DTC), full-scale LED lighting and much more as standard, the new S 1000 R once again sets the benchmark in the dynamic roadster segment. 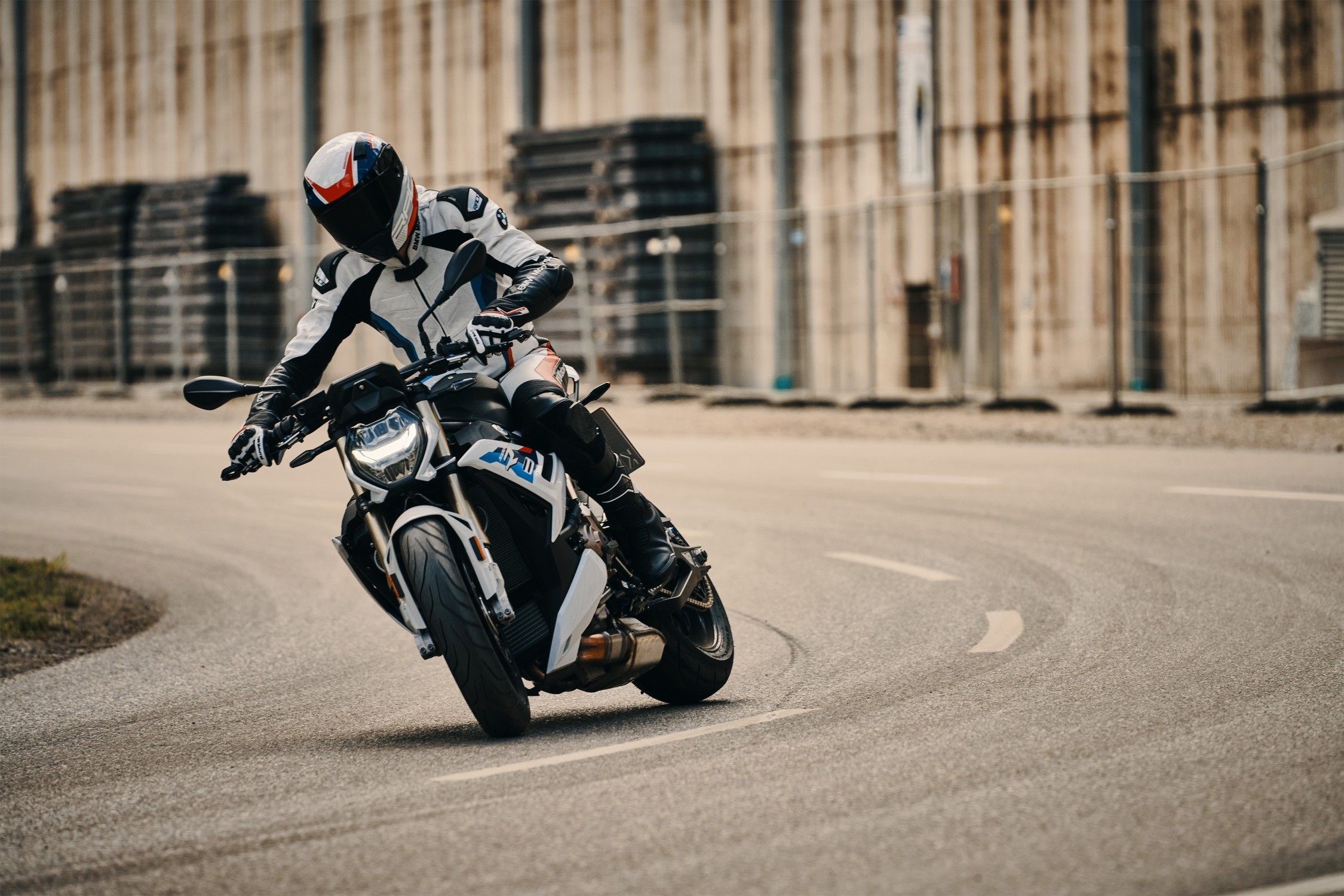 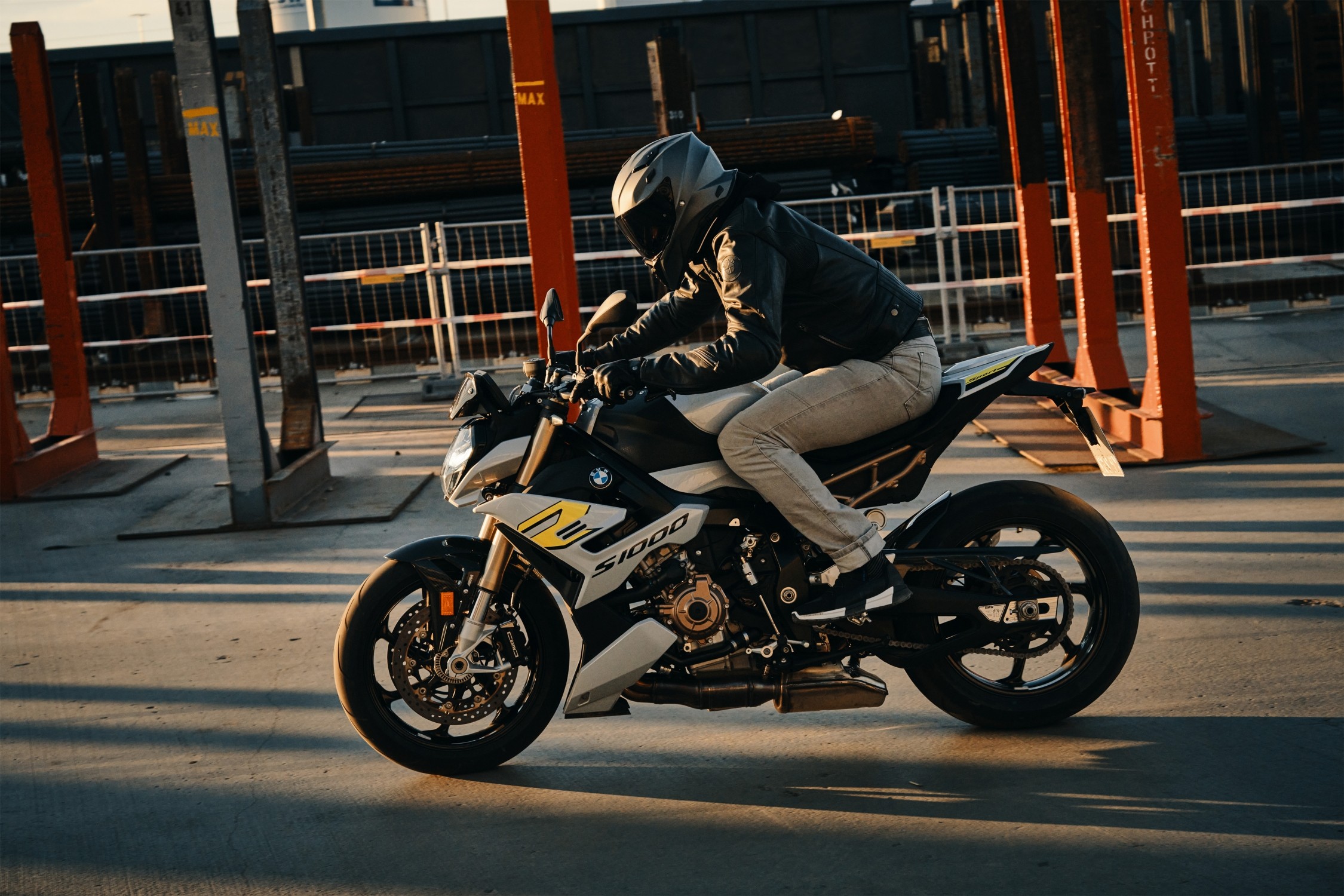 The in-line four-cylinder is based on the engine of the S 1000 RR and generates 121 kW (165 hp) at 11 000 rpm. The maximum torque of 114 Nm is available at 9 250 rpm. The engine speed range was made even wider, fuller and more harmonious in terms of achieving even more improved rideability thanks to a particularly linear torque curve.

In order to reduce the noise and fuel consumption levels as well as the engine speed level, especially at cruising speeds on country roads, the 4th, 5th and 6th gears now have longer gear ratios. In addition to a smoother, self-reinforcing anti-hopping clutch, the new S 1000 R is equipped with engine drag torque control (MSR) for the first time as an optional extra. The engine drag torque control prevents the rear wheel from slipping as a result of abrupt throttling or downshifting thanks to being electronically controlled. 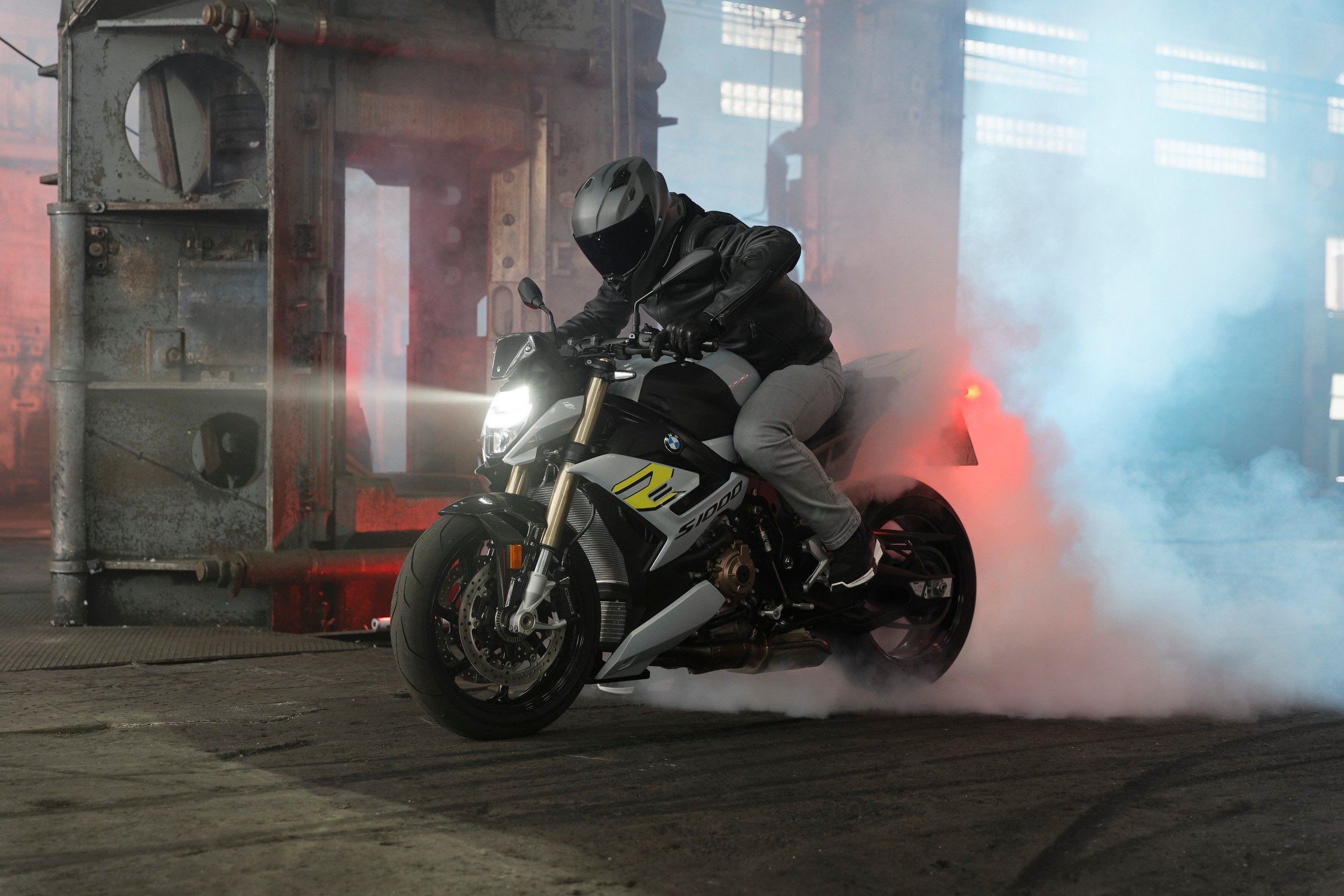 The chassis was also subjected to significant weight reduction, just like the entire motorcycle. The frame and swingarm are based on the S 1000 RR and have been made considerably lighter in than their predecessor. At the same time, the engine in the so-called Flex Frame takes on a much greater supporting function than before. The new frame offers further benefits due to its very narrow design.

This considerably reduces the motorcycle’s width in the area of the knee contact area, thereby offering a more relaxed riding position with even more freedom of movement. An adjustable handlebar clamp enables the rider to make ergonomic adaptations. Two positions are already available as standard: 0 mm / +10 mm towards the front. In addition, 10 mm handlebar riser mounts are offered as an option, which can also be turned in the direction of travel by 0 mm / +10 mm.

The underslung swingarm has been taken over from the S 1000 RR and the spring strut with Full Floater Pro kinematics is now located significantly further away from the swing axis and the engine. This prevents the engine from heating up due to waste heat and ensures even more stable temperature behaviour and even more constant damping response. In combination with the swingarm, which has its roots in motorsports, this results in more tyre grip and lower tyre wear. 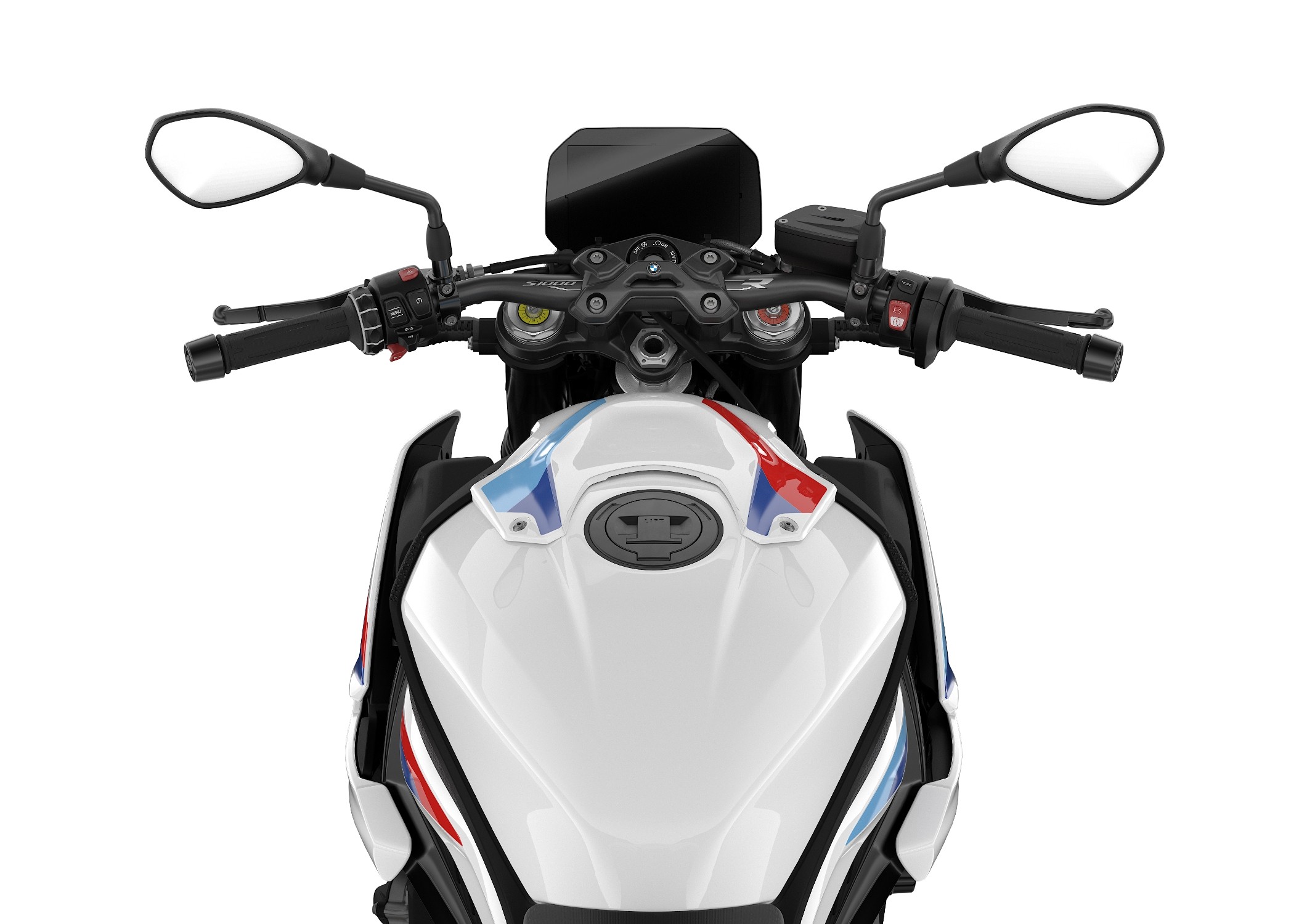 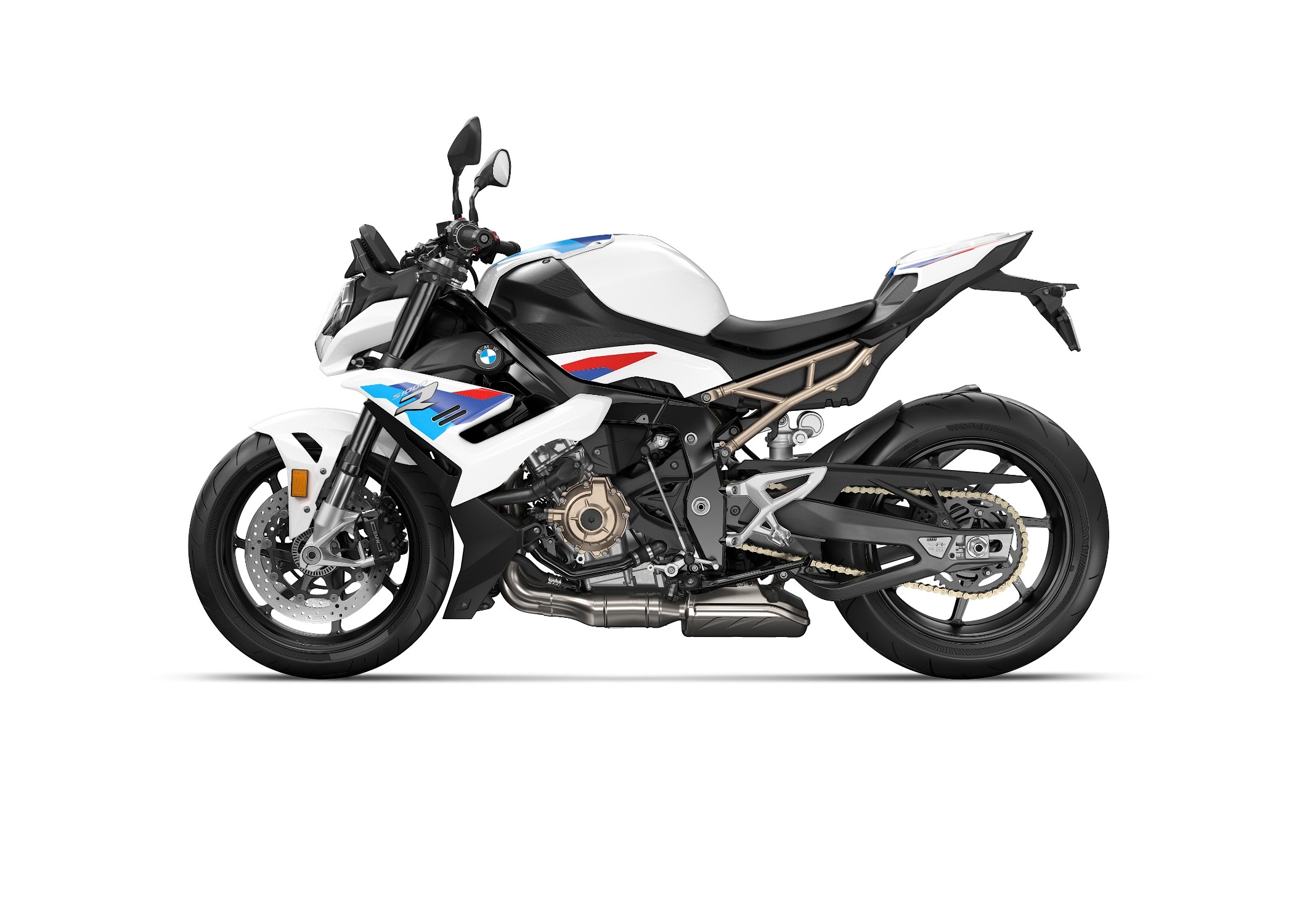 The new BMW S 1000 R’s instrument cluster was also taken over from the BMW S 1000 RR. Special emphasis was placed on the best possible readability in addition to an extended range of functions and information. The screen was therefore designed to be large for good readability and optimum information display even under difficult lighting conditions. The rider can choose between customised screen displays for various purposes.

The Pure Ride screen, for example, provides all the necessary information for normal road riding, while a further Core Screen shows displays for banking angle, deceleration and traction control. A Bluetooth smartphone interface which allows app-based arrow navigation is already included as standard. The TFT display is operated comfortably from the handlebars using the multi-controller. The optional M package provides a third Core Screen with bar display and lap timer.

The lighting units of the new BMW S 1000 R are based on state-of-the-art LED technology. These include the new, striking LED main headlamp with optimised low beam and high beam light. The newly designed turn indicator and rear lights also make use of LED technology. The rear turn indicators have been adopted from the BMW S 1000 RR and feature an integrated tail/brake light function. The front turn indicators are “hidden” in the fork area. Enhanced safety when riding at night is ensured by the adaptive turning light which is a component of Headlight Pro as an ex works option. In this case, further LED modules are added. The rider benefits from improved road illumination when cornering to make riding at night even safer. 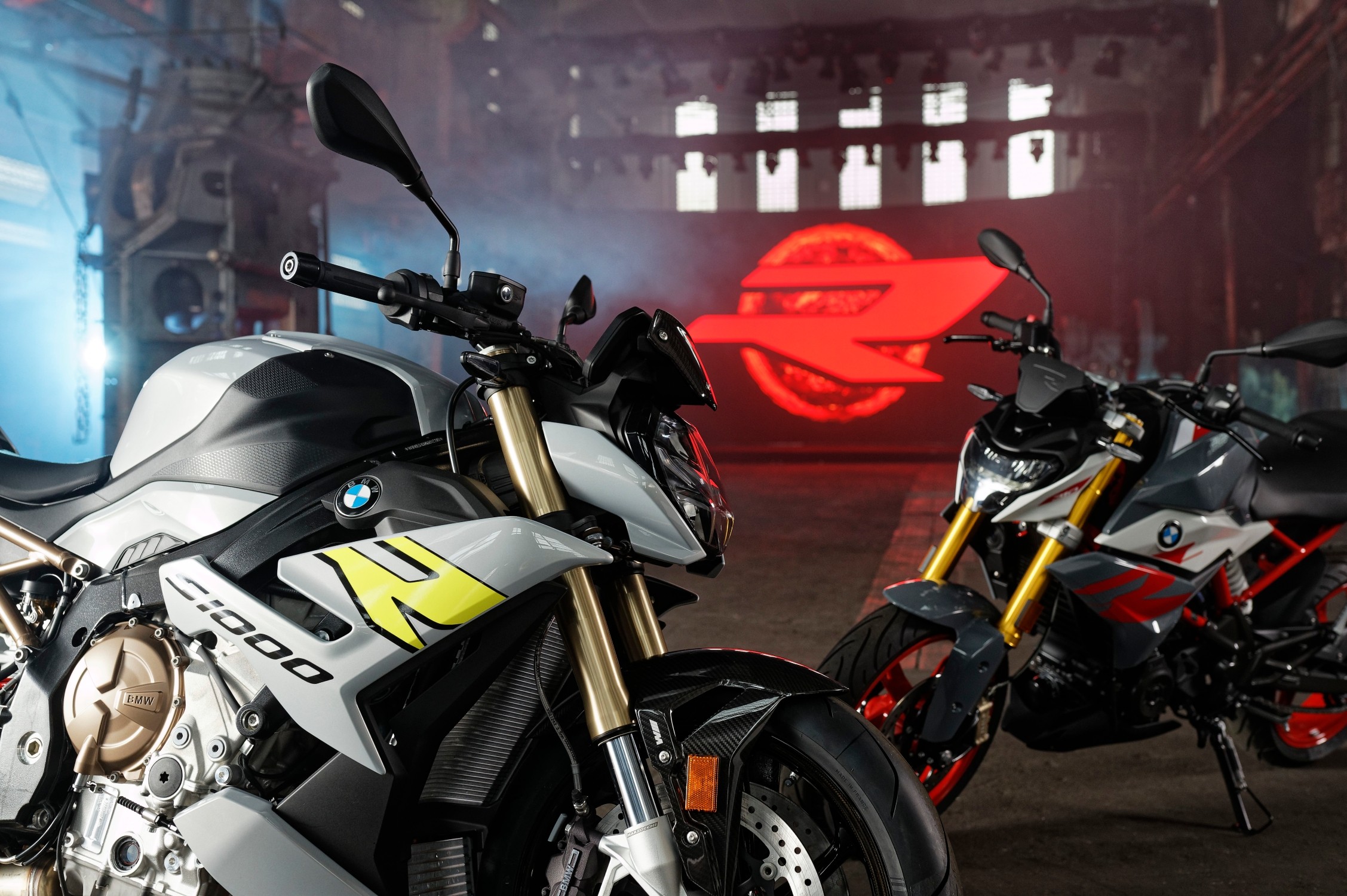 In its latest edition, the BMW S 1000 R also clearly borrows from its supersports counterpart, the BMW S 1000 RR, but placing the emphasis on its character as a dynamic roadster. To a greater extent than previously, the “tail up – nose down” look gives the BMW S 1000 R an eye-catchingly dynamic visual impact with its new body elements. The colour concept also highlights the sporty, dynamic appearance of the new BMW S 1000 R. In addition to the basic colour Racingred non-metallic, the options Style Sport and the M package with additional product content are available. 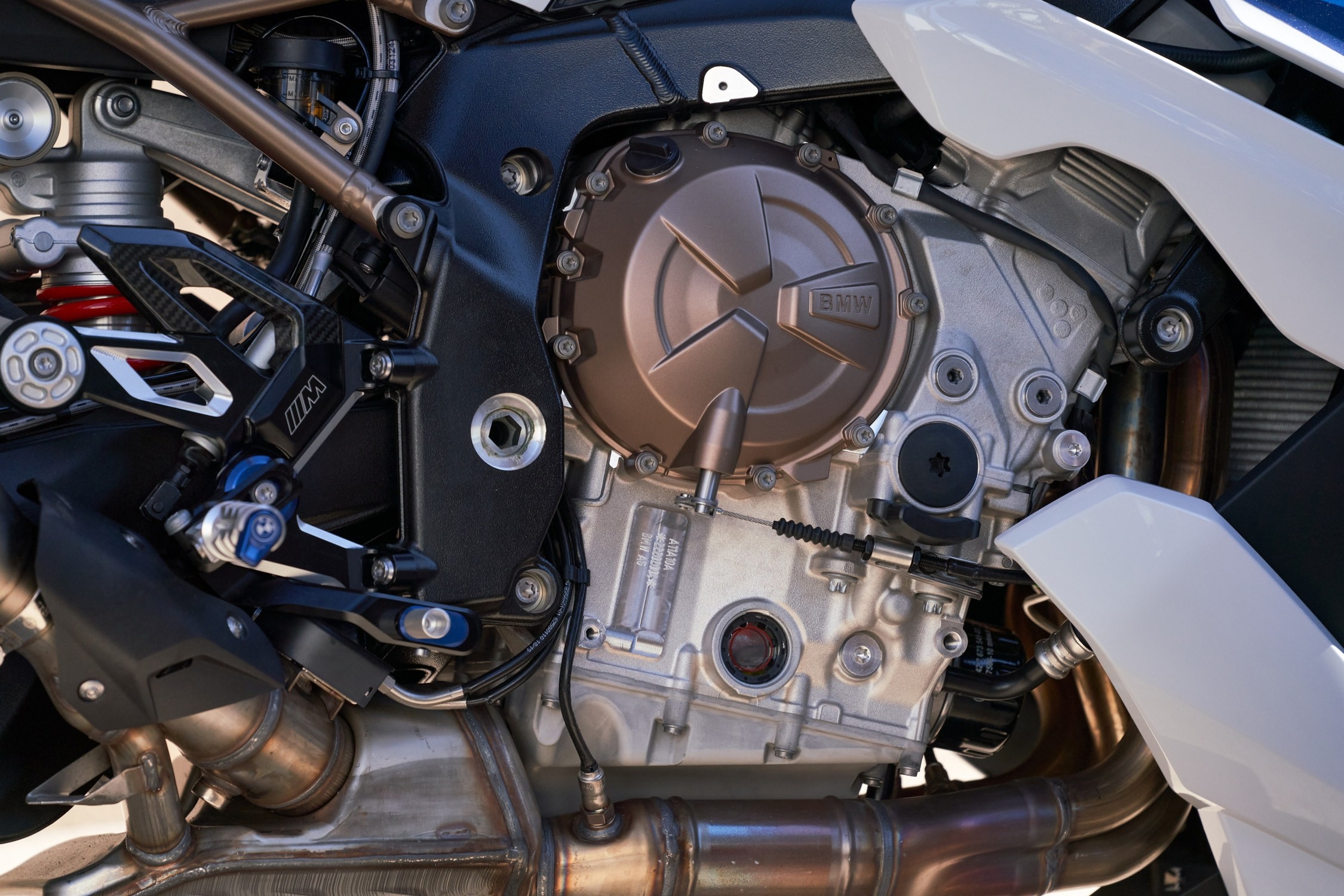 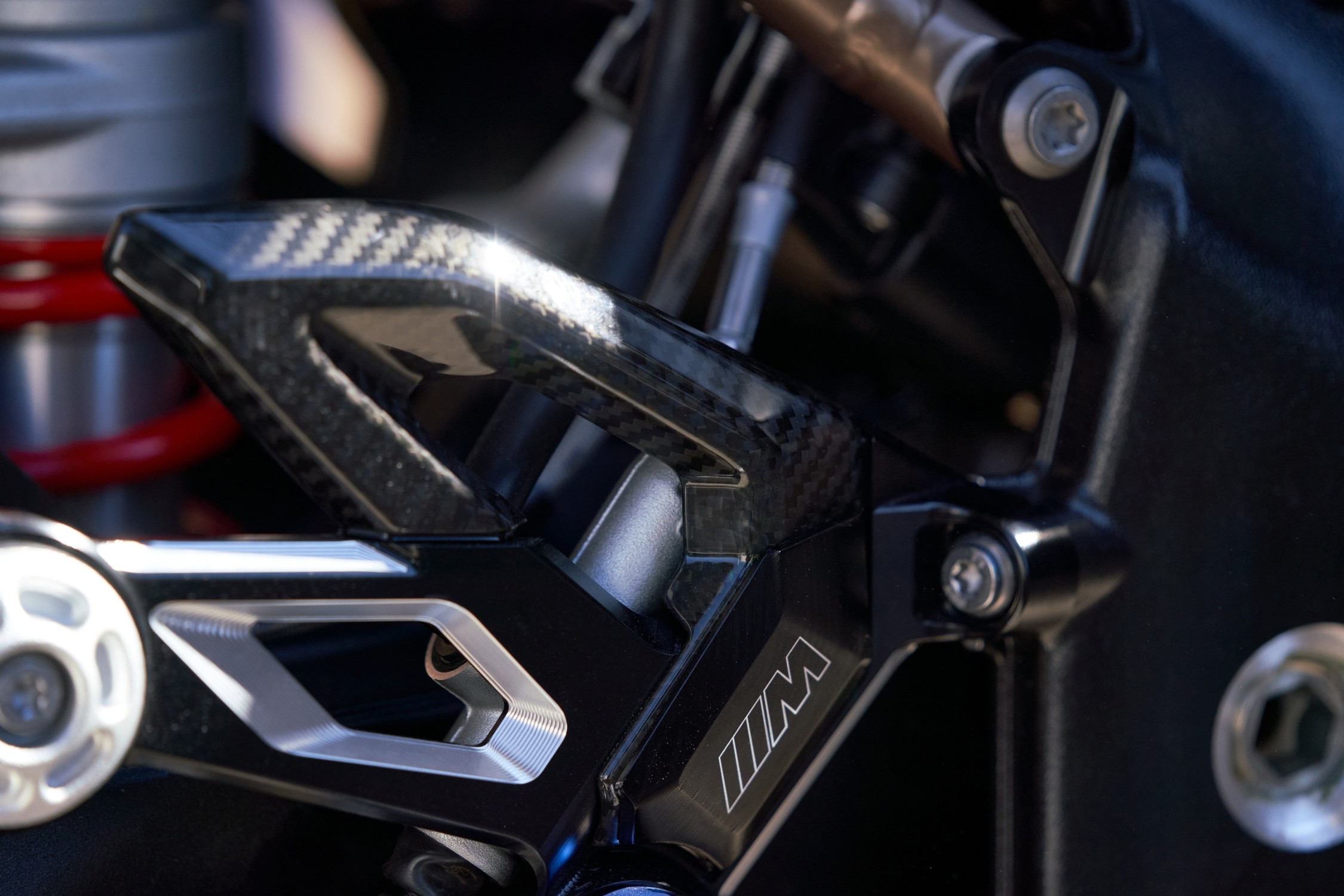 • Lightest dynamic roadster in its class: Weight reduction by 6.5 kg to 199 kg DIN empty weight or 202 kg including comfort and dynamics package. The M package reduces the vehicle weight by another 4.8 kg (2 kg with forged wheels / 3.7 kg with carbon fibre wheels). 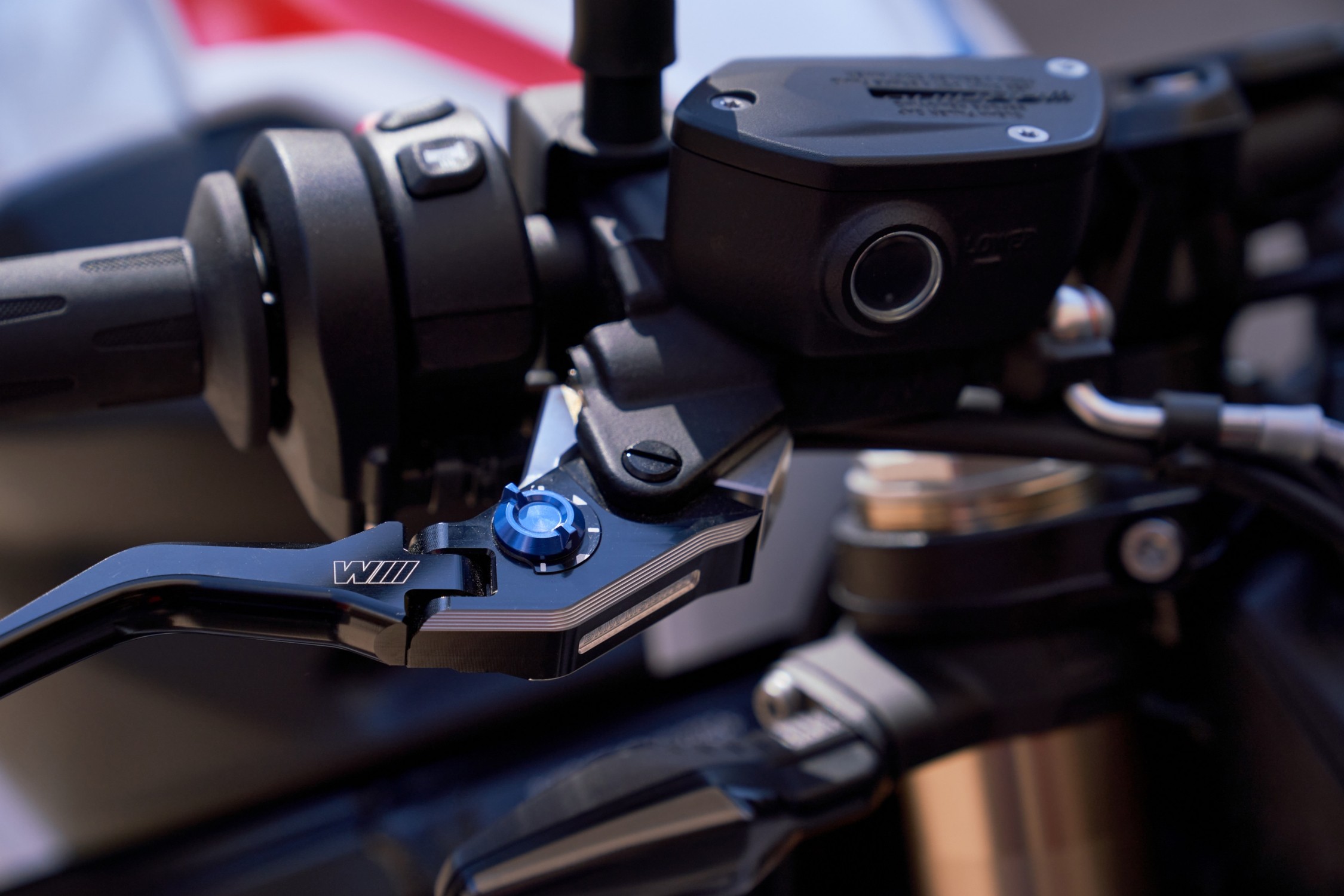 • Newly developed suspension featuring the “Flex Frame”, with the engine taking on more of a load-bearing function.

• Significantly improved ergonomics thanks to the “Flex Frame” allowing the rider to have his knees closer to the motorcycle body.

• ABS Pro for even more safety when braking, also in banking position, as standard. Dedicated rain brake mode with flatter brake pressure gradient. ABS Pro as standard for even safer braking when cornering.

• Shift Assistant Pro for quick up and downshifting without using the clutch available ex works.