Bitcoin continues to have a tremendous year with the asset hitting the highest price level in almost three years. The soaring Bitcoin price can be witnessed in the rising search rate for the keyword ‘Bitcoin’.

Data presented by Stock Apps shows that the global interest in the term ‘Bitcoin’ has soared by 112.76% on a year-to-date basis. By the week ending November 15, 2020, the term recorded a peak popularity of 100. A year ago, interest stood at 47. Nigeria has attracted the largest interest with a peak of 100 points while Kenya is tenth at 25 points.

The research also overviewed interest in the keyword Bitcoin from the United States over the same period. The interest has surged by 138.09%  year-over-year. The week ending November 15, 2020, recorded the peak popularity of 100. Nevada recorded the largest search volume at the peak of 100. The United States Bitcoin search trend largely correlates with the global graph. 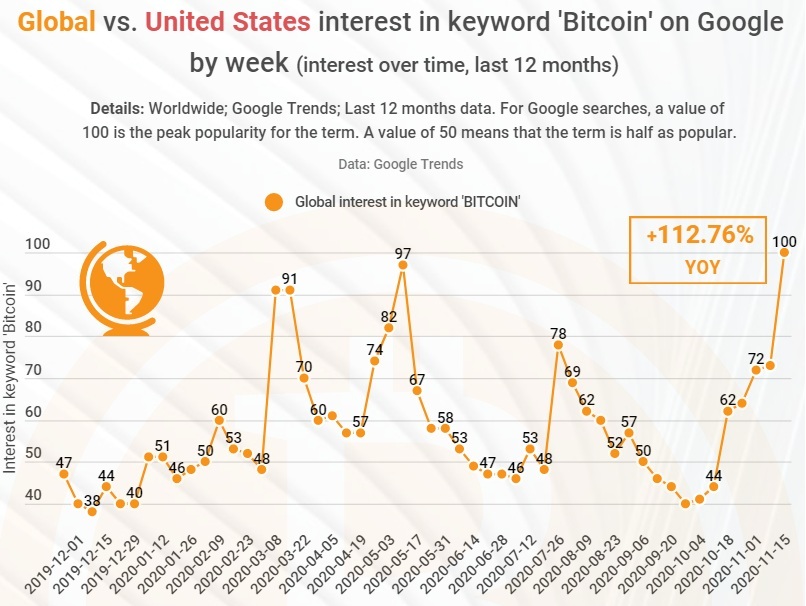 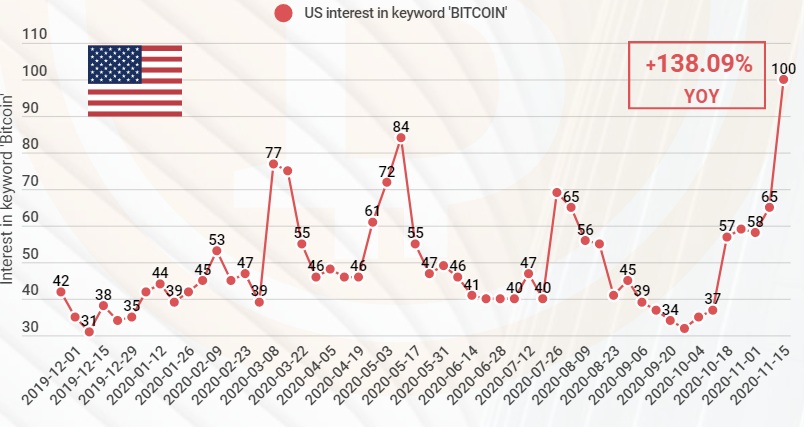 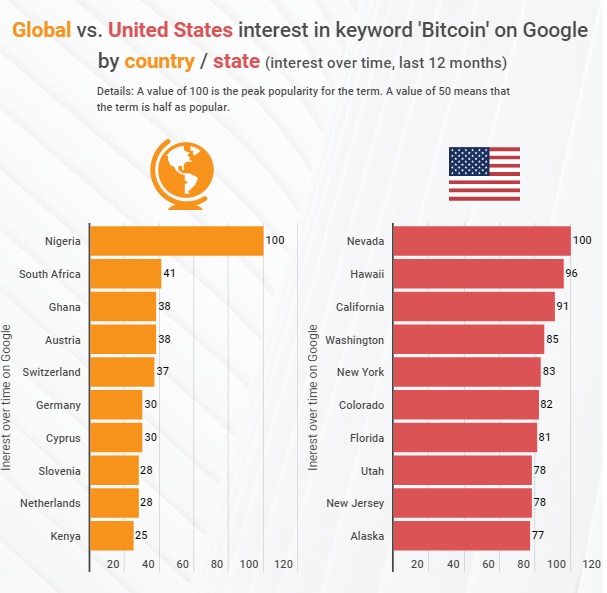 The Google search platform records topics with the most interest globally. The points represent the search interest relative to the highest point on the chart for the given region and time. A value of 100 is the peak popularity for the term.

The surge in searches correlates with Bitcoin’s continued interest from investors as well as a soaring value. Over the last two months, the asset has been growing in value at a similar pace recorded in 2017 when it hit its all-time price of $20,000. By press time, the asset was trading at $18,697. Notably, Bitcoin has recorded a growth of 225% from lows recorded early this year.

The skyrocketing Bitcoin searches can also be linked to the Fear of Missing Out as the prices hit new levels. Most people want to know more about Bitcoin, how to invest in it, and the risks involved. This has led to an increase in the adoption of the asset with data indicating that new Bitcoin addresses are increasing.

Like Nigeria, more people are interested in exploring Bitcoin’s promise of an alternative source of wealth in the wake of the coronavirus pandemic. The pandemic has triggered a global recession for most economies. Most, importantly, Bitcoin has remained resilient than traditional stocks alongside precious metals like Gold. Digital currency is now viewed as an alternative driving adoption.

The Bitcoin popularity in the US can also be linked to the alternative source of wealth aspect. The country’s economy plunged considerably this year, forcing more people to seek alternatives. This was a move away from the 2009 financial crisis. Notably, Bitcoin’s decentralization feature has been appealing to most Americans.

As the data, indicates, the search almost hit the peak at 97 in May around the halving of Bitcoin. The asset underwent halving on May 11 when the mining reward was cut into two. Historically, the halving event leads to a spike in the price of digital assets, although circumstances vary. There was speculation that Bitcoin might embark on another all-time high. Most people were interested in observing the price movement.

It is worth mentioning that Bitcoin’s current attention has been accelerated by interest from institutions. Institutions have been credited with leading to the price surge, unlike in 2017 when the ICO frenzy and retail investors were driving a price surge. The institutional investment shows trust in the digital asset from a significant place of power and publicity in the media.

Large mainstream companies investing in Bitcoin forges the path for other high-net-worth individuals and smaller businesses to do the same. Recently, digital payment platform PayPal announced the upcoming support for Bitcoin, a move attributed mostly to the price surge.

Read Also:  The tax implications of investing in bitcoin & other cryptocurrencies

October 2020 was one of the best months in almost three years for Bitcoin miners. According to Coin Metrics data, during that month, network...
Read more