According to the research data analyzed and published by Stock Apps, Alibaba’s gross merchandise value (GMV) for the 2019 event was $38 billion, nearly half the 2020 figure. Though it is typically a 24-hour event, this year it ran for two weeks, starting from November 1 all the way to the midnight of November 12. 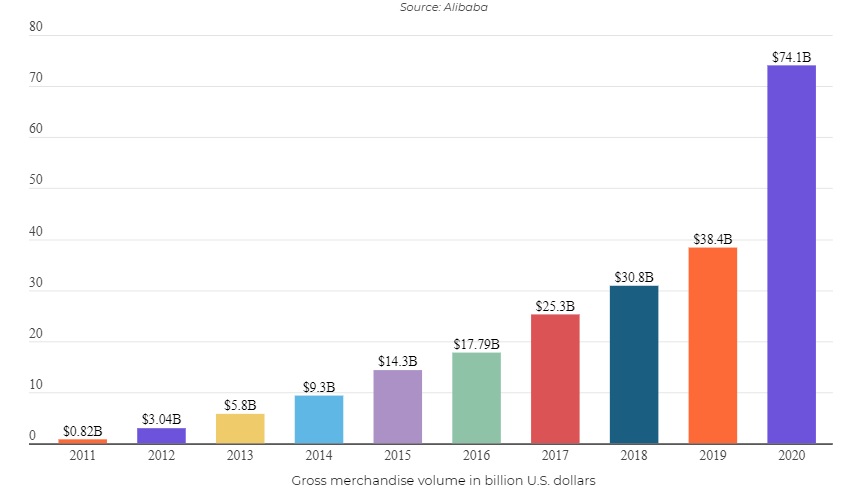 The benefits were felt by other online retailers as well as multiple international brands. For instance, JD.com reported $40.97 billion in GMV over the duration of the event. Its sales for this year’s events exceeded the 2019 totals by 33% and set a new record as well. Together, the two eCommerce giants, Alibaba and JD, generated over $115 billion across their platforms.

Cumulative transaction volume on Alibaba’s eCommerce sites amounted to $40.87 billion within the first hour. It is worth noting that this figure surpassed the total sales posted during the full event in 2019.

Electronics retailer Sunig.com announced that in the first 19 minutes of the event, it had sold goods worth $758 million.

According to a Bloomberg report, in the first 111 minutes of the day of the event, 100 brands had generated transactions worth around $15 million each. These included Nike, Huawei, Adidas, L’Oreal, Xiaomi, Lancome and Apple. On the Tmall platform, Estee Lauder was first to cross the 1 billion yuan mark in sales.

This year’s event had 800 million shoppers participating. On November 11, Alibaba’s B2C site Tmall offered over 16 million products from at least 250,000 brands. At the peak of the event, there was an average of 583,000 orders placed per second.

Of the 250,000 brands, 31,000 were foreign, coming from over 220 countries and regions. American brands had the highest international sales to China during the event, racking up sales worth $5.4 billion.

Alibaba Singles Day has over the years dwarfed other shopping festivals by a wide margin. To illustrate, Amazon Prime Day 2020 sales were $10.4 billion, up from $7.16 billion in 2019 according to Practical eCommerce. 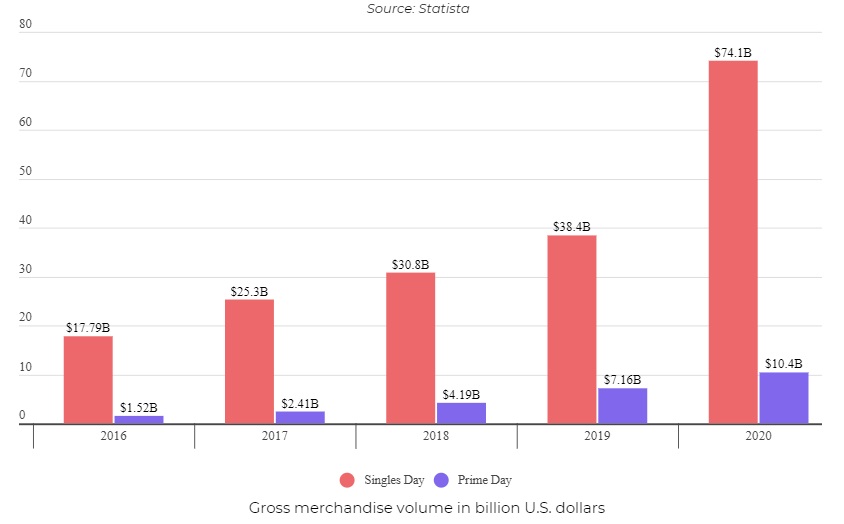 - Advertisement -
Read Also:  Trash 2 Cash: What you need to know about Jaiz Green Account and how to convert your waste to cash!

As a result of the pandemic, Alibaba scaled down on live events this year, opting instead for livestreams. According to Alibaba, there were around 400 company executives as well as 300 celebrities holding livestreams at Singles Day 2020.

According to Coresight, the livestreaming market in China is on track to bring in sales worth $125 billion in 2020. Comparatively, it brought in about half the amount in 2019, $63 billion.

The primary reason for the staggering gains is the growing trend of online shopping due to the pandemic. Notably, the US livestreaming market is only worth about $5 billion according to Coresight.

Moreover, an AlixPartners survey carried out between September and October 2020 revealed that in the trailing 12-month period, over 60% of Chinese consumers had made purchases through livestreaming.

The 2020 shopping festival, however, came a week following Alibaba’s $76 billion drop in market cap. This was as a result of the suspension of the $37 billion listing of financial technology firm Ant group, in which Alibaba holds a one-third ownership stake.

Additionally, Chinese regulators released draft anti-trust rules, aimed at controlling monopolistic behavior. In the wake of the release, there was a huge sell-off for the shares of top tech players in the region.

For the five heavyweights, there was a combined loss of over $280 billion in their collective market cap.