The Taraba State government is to spend over 139 Billion Naira for both its recurrent and capital expenditure in the 2021 fiscal session. 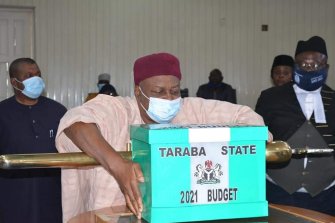 Taraba state governor, Arc. Darius Dickson Ishaku, while presenting the budget before the state House of Assembly in Jalingo at the weekend said the budget was a departure from the normal classification of seventeen programmes to only four major sectors.

According to him, the concentration on just four sectors was a deliberate plan by the government not only to focus attention on these core areas of development, but it was also informed by the desire to conform with the International Public Sector Accounting Standard (IPSAS).

Giving an insight into what to expect in the coming year, the governor said under recurrent, personnel cost will consume Thirty-Four Billion, Three Hundred and Seven Million, Six Hundred and Seventy-Nine Thousand, Eight Hundred and Forty-Nine Naira (N34,307,679,849.00).

On the capital estimate side, the thrust of the budget would concentrate on the economy, social, regional and administration.

As part of the strategies to ensure proper implementation of the budget, the governor said all Ministries, Departments and Agencies must maintain discipline in the execution of their approved estimates, enhance review and monitoring of the physical performance of all capital projects, patronage of the government printing press and the creation of the state economic council.

The Taraba state government has banned the use of motorcycles in some towns and villages across three local government areas of the state.  This was...
Read more

Governor Darius Dickson Ishaku on Thursday signed the Taraba State 2021 Appropriation Bill into law.  At a short but impressive ceremony at the Taraba State...
Read more

Taraba State Governor, Arc. Darius Dickson Ishaku has called on the people of the state to register en mass in the contributory Social Health...
Read more

Following certain bad happenings in the state and around the country, the Taraba Government has decided to impose a curfew on Jalingo, the state...
Read more
- Advertisement -