After a drop in CCI in the month of September, in October, Nigeria’s CCI got back on its trend for recovery increasing 7 points to an index value of 22. This was primarily led by a 12-point increase in the index of consumer expectations which increased to 43 from 31. 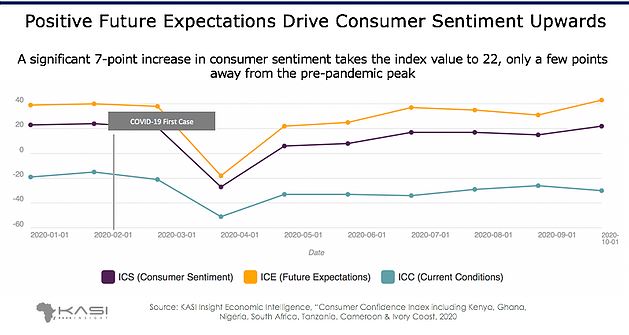 Nigerians are becoming more optimistic about the future; this index value is comparable to that of pre-pandemic levels. However, current conditions scored lower in October, dropping to a value of -30.

The drop in consumer sentiment surrounding current conditions was mainly driven by the decrease in sentiment regarding job prospects. KASI’s job prospect sub-index dropped further to -71 in October, the lowest the index reading has been since April 2020 when the pandemic caused a halt of the global economy.

Nigeria is heavily dependent on oil production with an average daily output of 2 million barrels of oil. While the number has gone up since the peak months of the pandemic, output now is at 1.2 million barrels of oil a day – causing a 13.89% contraction in the sector. As a result, Nigeria’s real GDP has contracted by 3.62%, a second consecutive contraction in GDP, triggering a recession in the economy.

As per our COVID-19 Pulse tracker, 77% of respondents indicated that job search has become more difficult in the last few months, up 11% from the number of people who responded the same way in September.

Furthermore, inflation currently up to 14.2% from the 13.7% recorded in September and it is expected to continue on this upward trend. Overall, the IMF forecasts a 5.4% drop in Nigeria’s GDP.

These uncertainties have dampened current consumer sentiment and hence, aside from keeping themselves and their family healthy, Nigerians are worried the most about struggling financially and making enough money for the household.

While currently glum, Nigerians expect future conditions to improve as the holidays approach and restrictions ease

Despite the current bleak economic conditions, Nigerians remain positive about the future as shown by the index of consumer expectations improving to a record high of +43. This was led by the expectation that general economic conditions will improve both in the country and the respective cities, these indexes rising 10 and 15 points respectively in October.

This expectation of future improvement was reflected in other sub-indexes as well. Not only are Nigerians optimistic about meeting regular expenses, as seen in the 18-point increase in the index to a value of 32, they are also optimistic about making and increasing purchases of discretionary items.

The index went up a significant value of 10 points to 49, comparable to pre-pandemic index values. This goes to show that firms in the retail industry may be expecting some increase in sales over the holidays.

In addition to optimism surrounding household income and expenditure, the improving pandemic conditions have also impacted sentiment. October survey shows an increase in 6% of people who think the worst of the crisis is now over.

Nigeria’s daily case count has significantly decreased with under 200 new cases being recorded daily (sometimes under 100) in comparison to the over 300 cases recorded daily on average in August. The easing of restrictions and the allowance of operation for free travel and work between 08:00 to 18:00 has brought about some positivity in the country.

While the majority of Nigerians surveyed feel that it will be anywhere between 6 months or more before “normal” comes back, easing restrictions have allowed some sense of normalcy to come back. As of September 19th, cinemas, gyms and spas, and other recreational centres have reopened. Albeit, cinemas will only be allowed to operate at 33% capacity.

Despite the recession and the pandemic, there is hope for brands ahead of the holiday season

As a result of optimism surrounding the pandemic situation, Nigerians have eased up on restrictions they’ve placed on their lifestyles as well. There was a 21% drop in the number of people who responded that they are keeping their children home from school and also a 6% decrease in individuals feeling the need to self-isolate/quarantine.

Furthermore, there has been a fall in the percentage of people avoiding restaurants, public transport, cinemas, public halls, and public gatherings which reflects the ease in restrictions on the public.

While this reflects well for firms in the entertainment and retail industries, travelling doesn’t seem to be on the agenda for Nigerians this coming holiday. 42% of our respondents indicated that they have cancelled travel plans in October, up by 11% from the value recorded in September.