2020 has been a rollercoaster year for a good number of industries and activewear is no exception.

For the key players in the industry, the challenging year has left little option but to adapt. One of the recent trends for top activewear players is a shift to direct-to-consumer sales.

According to the NPD, online sales of activewear will account for 40% of all sales in 2020, a new high.

For Nike, the top sportswear brand globally, there was a 75% increase in online sales during its fiscal Q4, which ended in June 2020. At the time, the brand closed 90% of physical stores. For the first time, eCommerce revenue accounted for 30% of its total revenue.

During the three-month period which ended on August 31, 2020, Nike’s online sales rose once again, this time by 82%. This took place although retail outlets had reopened.

Thanks to the surge in eCommerce, the company offset losses as annual sales only dropped by 5%. From $39.1 billion in fiscal 2019, it dropped to $37.4 billion during fiscal 2020 according to its earnings report.

During the three-month period which ended on September 30, 2020, its revenue amounted to $7.01 billion. Operating profit fell by 12% during the quarter to $934 million while net profit totaled $677 million.

Despite the overall drop in revenue, Adidas online sales increased by 93% in Q2 2020 alone. In April and May 2020, growth accelerated at a triple-digit rate. During Q3, online sales surged by 51%. 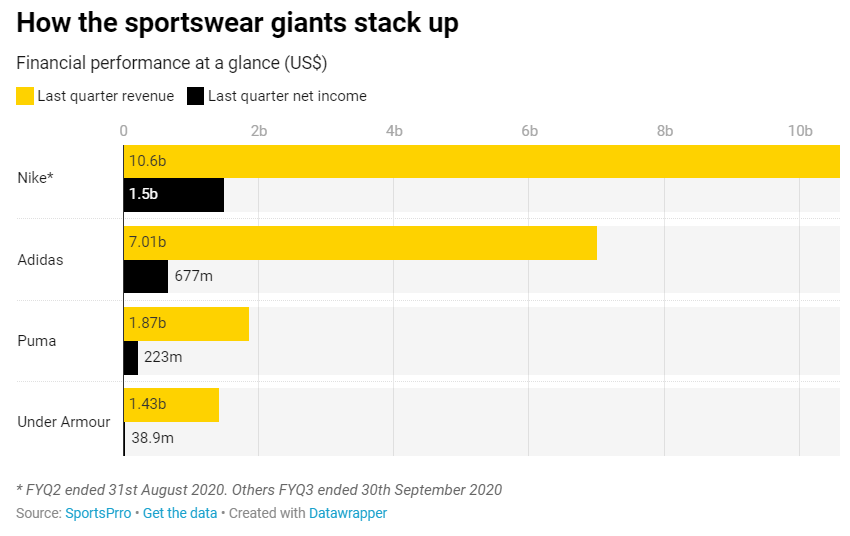 Overall, Puma saw total eCommerce sales for the first nine months of 2020 grow by an impressive 66.5%.

For Under Armour, the three-month period which ended on September 30, 2020, saw wholesale revenue drop by 7% to $830 million. However, like the other activewear giants, the company saw direct-to-consumer sales rise by 17% to $540 million. Its revenue for the period was $1.43 billion with $38.9 million as net profit.

According to NPD, athleisure items like sweatpants and sweatshirts are projected to account for 31% of total apparel spending in the US during the 2020 holiday season. Comparatively, the segment had a 26% share in the 2019 holiday season.

Old Navy and Athleta, both owned by Gap Inc, reported sales gains in Q3 2020. According to the company’s earnings report, Old Navy had an increase of 55% in the activewear segment. The reason for this was that more customers wanted comfortable clothing as they spend more time indoors.

Growth Rate of the Top Athleisure Brands in Q3 2020

Athleta, Gap’s brand for female workout clothes, similarly recorded an increase of 35% in net sales. On the other hand, the Banana Republic, famed for work apparel, had a decline of 34% in net sales.

Abercrombie & Fitch has also experienced success with Gilly Hicks, which sells women’s loungewear and bras. During the most recent quarter, it saw a double-digit increase in sales as online sales soared over 100%.

In a bid to get a share of the pie, Kohl’s is planning to launch a brand known as FLX for active apparel in 2021.

The US athleisure market is estimated to reach $105.1 billion in sales in 2020 according to Euromonitor and Coresight. Compared to 2019, that would be a 9.2% decrease, attributed to the pandemic and reduced in-store shopping. However, the two forecast a rebound in 2021, projecting that the sector will grow by 7.9% YoY.