The FGN bond space had a slow and prolonged run today, as market attention was fixated on the outcome of the bond auction scheduled for today. Interestingly, we saw more aggressive offers at the curve’s belly, which was about 10bps higher than yesterday’s levels.

On the other hand, the long-dated bonds were very quiet, with few quotes shown for most of the trading session. 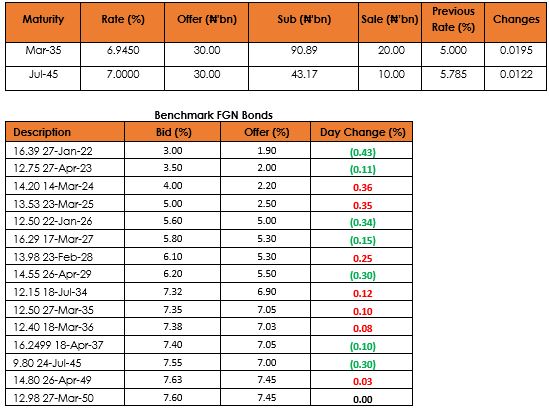 At the primary auction, the DMO raised only 50% of the projected offer as the auction followed the weak sentiments from the secondary market. Consequently, stop rates jumped by an average of c.158bps across the two tenors on offer, following a less heavy demand seen from local institutional investors than the previous auctions of this year.

Despite a high bid-to-offer ratio of 2.21X, we can infer that the bid range was unfavourable, making it difficult for them to raise the projected offer amount.

We expect an outpour of the frightful sellers in the market tomorrow following the outcome of today’s auction, which may be a good time for local investors who are seeking to invest their funds at reasonable levels.

For T-bills, the market followed the bonds space’s trading pattern, staying very quiet for most trading sessions. However, we saw few interests for the latest OMO issue (07/Dec Bill), which traded at 1.10% levels.

At the PMA, the DMO rolled over a total of N7BN at today’s auction same as the amount on offer. Stop rates decreased by an average of c.113bps for the 182days and 364days bills while the 91days increased by c.4bps. Despite this movement, we can conclude that the NTB auction closed on a weak note because, with the volume on offer, the market expected that the bid range for this auction would be low.

We expect to see the unmet demand for tomorrow at today’s auction spill to the secondary market, especially for the longer-dated bills that may cause the rate to dampen in the market.

Interbank rates remained low, supported by excess system liquidity levels. The markets opened c. N633.23BN, 5.22% lower than the previous session, as OBB and OVN rates remained relatively stable to close at 0.67% and 0.92% for OBB and OVN rates, respectively. We expect rates to stay at these levels for tomorrow and may drop slightly lower as inflows from maturities hit the system,

The Apex bank’s continuous intervention at the IEFX market was reasonably stabled rate, albeit we saw movement today as the IEFX rate depreciated by N0.67k compared to yesterday.

The NIGERIA Sovereigns traded on a weaker note with less aggressive bids shown across the curve despite the continuous rebound in oil prices now at $51. The 2025s and 2049s papers were the most significant losers across the sovereign curve as locals showed no interest in papers offered better than the market at the curve’s belly and tail. Consequently, we saw yields expand on an average of c.4bps across the curve.

The NIGERIA Corps also had a quiet session, albeit large, yield movement for the SEPPLN 22s, which expanded by c.165bps compared to Yesterday’s closing

The FGN Bonds market traded with mixed sentiments today, with some demand seen on the mid-end of the curve (2027s -2029s) while the long...
Read more

DMO Calls the Market’s Bluff, Redeeming Over 65% Of the Amount Offered on the 364days Bills

The bearishness in the FGN bond space continued today, as a flurry of sellers cut across the benchmark curve. The 2027s, 2029s, and 2049s...
Read more

At the FGN bonds space, the market opened the week on a quiet note as we saw a slight pull-back from the recent weakness....
Read more
- Advertisement -