“What Worries the World?”: Concern about COVID-19 is at its highest level since May 2020

One in two (50%) around the world say that Coronavirus is one of the top issues facing their country today. Many of the 27 countries surveyed show significant month-on-month increases in reported concern.

New year cheer lacking, according to What Worries the World

In January 2021, 62% of people worldwide say that things in their country are heading in the wrong direction. This is just shy of our survey’s most pessimistic recent point; we recorded 64% in November 2020.

Peru currently occupies the position of the most gloomy nation, with 83% saying things are on the wrong track. Behind Peru are South Africa (78%), Chile (77%) and Poland (76%). With 75% saying things are heading in the wrong direction, the US now holds a top-five score on our “wrong track” listing, a dramatic change from January 2020 when it ranked among the five most optimistic countries. 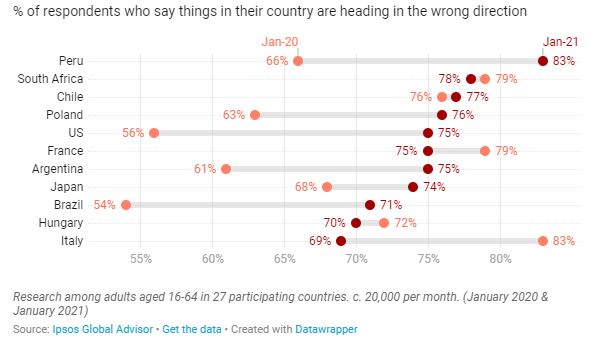 Coronavirus concern is now at its highest point since May 2020. Across the 27 countries surveyed, one in two (50%) say that COVID-19 is one of the most worrying issues facing their nation today.

Following new record numbers of daily cases in Japan, the host of the postponed summer Olympic Games shows the greatest level of concern about Coronavirus (+7 points over the last month to 70%), sharing the top spot with Malaysia (also 70%).

The greatest increases in concern about Coronavirus in the past month are seen in South Africa (+22), The Netherlands (+10), Argentina (+10), Australia (+9) and Peru (also +9). The below chart shows the month-on-month increases for the 12 nations with the highest concern. 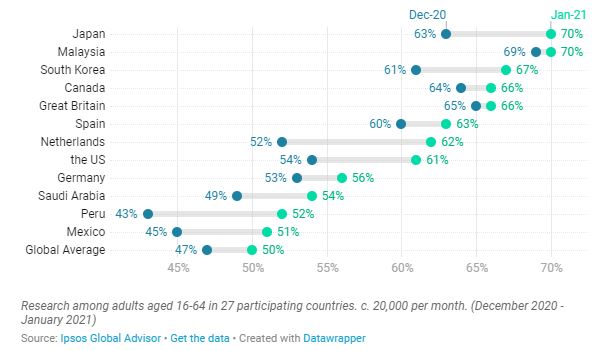 The top global concerns are currently (in the following order): Coronavirus (50%), Unemployment (37%), Poverty & social inequality (29%), Financial/Political corruption (27%) and Healthcare (24%), which replaces Crime & violence as the fifth most pressing global issue this month.

What Worries the World: January’s top 5

Italy and South Africa are currently the nations most concerned about jobs, with 62% of people in each saying this is a top issue in their country today. Spain is third with 57%.

Read Also:  “What Worries the World?”: COVID-19 is the biggest concern for the sixth successive month
- Advertisement -

Unemployment has remained the second greatest global worry since the onset of the Coronavirus crisis. In January 2020, the issue was tied with Financial/Political corruption (31%) behind Poverty & social inequality (34%).

Russia continues to be the country most concerned about Poverty & social inequality (57% say this is one of the most important issues). This month Russia sees a 6-point increase in concern, further widening the gap between itself and the other nations surveyed.

In January 2020, Poverty & social inequality was the number one global concern with 34% on average. Going back a further 12 months, this issue was also top of our worries ranking in January 2019, sharing this position with Financial/Political corruption.

Hungary joins South Africa at the top of the table of countries most concerned about corruption, with a 10-point increase since last month. Some 62% in these two countries consider corruption to be among the most worrying issues. Malaysia (48%), Russia (48%) and Peru (45%) complete the top five most concerned.

The level of global concern about corruption is now 10 points below the figure recorded for Unemployment; in January 2020 levels of concern for these issues were equal.

An average global score of 24% recorded for Healthcare this month puts the issue in fifth place in our survey, ahead of Crime & violence.

The highest level of concern about healthcare over the last 12 months was recorded in April 2020 when our survey found 28% worried about this issue. Hungary, Poland Brazil also comprised the top three then.

What Worries the World: 44% of people worldwide select COVID-19 as one of the main issues of concern facing their country – Report

Ipsos’ What Worries the World survey tracks public opinion on the most important social and political issues across 27 countries today, drawing on 10...
Read more

“What Worries the World?”: COVID-19 is the biggest concern for the sixth successive month

On average, 45% of people around the world now say COVID-19 is one of the top issues facing their country. This is in line...
Read more

“What Worries the World?”: COVID-19 is the biggest concern for the 5th successive month, with worries on the increase in a number of countries.

46% of people around the world see Coronavirus as one of the top issues affecting their country today. Our latest What Worries the World...
Read more

“What Worries the World?”: COVID-19 is the biggest concern the 4th successive month

...although it is not as dominant as it was. This marks a drop from the June survey, which saw COVID-19 listed as the single most...
Read more
- Advertisement -