Nigeria slipped to 110th position out of 165 independent states and two territories in the latest Economist Intelligence Unit’s (EIU) Global Democracy Index 2020 report titled “Democracy Index 2020: In sickness and in health?” due to coronavirus-related lockdowns, which had a negative bearing on the civil liberties category.

Nigeria ranked 110 with a score of 4.10 out of 10, Nigeria was categorized as a hybrid regime. While Nigeria was ranked 20 in Sub-Saharan Africa, Mauritius, Cape Verde, Botswana and South Africa occupies, 1st, 2nd, 3rd and 4th positions respectively.

The decline in Africa’s low overall democracy score in 2020 was also driven by coronavirus-related lockdowns, which had a negative bearing on the civil liberties category (the region’s score dropped from 4.46 in 2019 to 4.23 in 2020).

Typically, the strategy in Africa was to make lockdowns as short as possible, which meant that they were enforced ruthlessly by the police. During the early weeks of a local lockdown, more Nigerians died at the hands of police than from coronavirus. 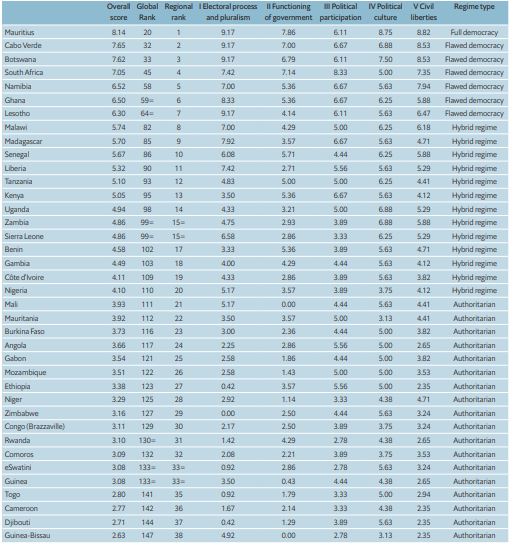 Heavy-handedness in several countries, such as Kenya and Senegal, is common but reached new highs in places where curfews were ordered. The measures stripped citizens of their freedom to assemble and travel, causing severe interruption to livelihoods.

The harshness of the restrictions led people to disregard them, and there were protests and riots in some countries, including in some with a history of only limited political participation, such as Uganda and Angola.

Constraints placed on political activity—applied disproportionately for the opposition—ahead of January 2021 elections in Uganda illustrated how autocrats use the excuse of new threats such as coronavirus to crack down on the opposition and hold on to power during a time of crisis.

Even where restrictions were not especially strict, such as in Malawi, they were oppressive enough to prompt protests and force the government to abandon the policy of a lockdown altogether. In Angola, unrest was also connected to the postponement of local elections.

The Economist Intelligence Unit’s Democracy Index is based on five categories:

Based on their scores on 60 indicators within these categories, each country is then itself classified as one of four types of regime: full democracy; flawed democracy; hybrid regime; and authoritarian regime.

Many of the nations in Sub-Saharan Africa are concentrated at the bottom of the Democracy Index rankings. The continent has only one “full democracy”—Mauritius—and six “flawed democracies”.

The number of countries classed as “hybrid regimes”, at 13, is two less than in the 2019 index, as Burkina Faso and Mali slipped down the ranking to become “authoritarian regimes”, alongside 22 other African states.

Regional deterioration was also a consequence of declining scores for many countries in the category of electoral process and pluralism, with the average regional category score falling to 3.87 in 2020 (down from 4.01 in 2019).

Disputed elections in Tanzania and Guinea led to both countries being marked down in the index for polling irregularities. However, there was a bright spot: Malawi’s constitutional court overturned a presidential election held in 2019 that was widely decried as being unfair.

A rerun was held in June 2020 and an opposition candidate won, marking a major step forward in the electoral process that pushed Malawi five places upwards in the global ranking.

Taiwan, Japan and South Korea took the top three spots in Asia, moving from the “flawed democracy” category to be classified as “full democracies.”

Nigeria slipped to 109th position out of 167 countries in the latest Economist Intelligence Unit’s (EIU) Global Democracy Index report due to irregularities in...
Read more
- Advertisement -