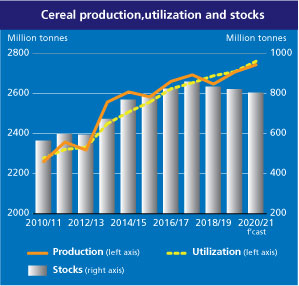 The increase since the previous report rests mostly on better-than-expected yields that boosted production to its second-highest level on record in both Australia and Canada while wheat production in Iraq is also lifted to reflect the latest official estimates.

The forecast for world rice production in 2020 has also been raised, by 2.2 million tonnes, to 510.6 million tonnes, up 1.8 percent year-on-year and marking an all-time high. 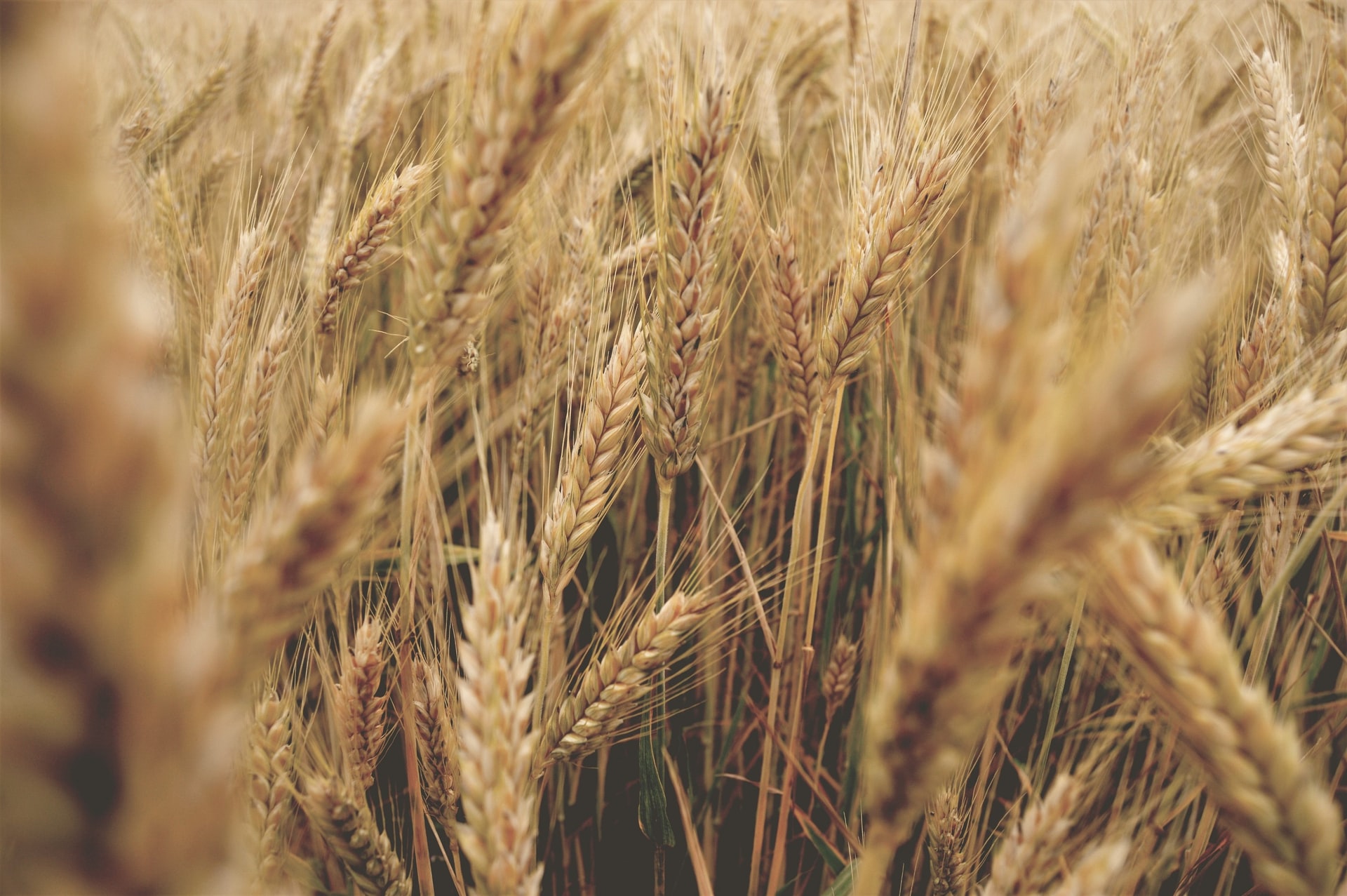 The revision mainly stems from better than previously anticipated 2020 yield outturns in China (Mainland), the Philippines and Guinea, although upward, area-based, historical revisions were also introduced for the Democratic Republic of Congo and Venezuela (the Bolivarian Republic of).

By contrast, the forecast for world coarse grains production has been trimmed by nearly 5 million tonnes, reflecting sizeable cuts to maize production estimates in the United States of America and Ukraine, owing to poor weather conditions that curtailed yields.

Looking ahead to 2021 cereal output, early production prospects for winter wheat crops in the northern hemisphere indicate a modest increase this year. In the United States of America, encouraged by higher prices, winter wheat acreage increased by 5 percent year-on-year.

However, continued dry weather has partially curbed prospects, and field reports confirm inferior crop conditions compared to the average. In the European Union, conducive rainfall and mild temperatures, in combination with the increased planted area, particularly in France, indicate a likely strong production recovery from the poor 2020 harvest.

In the Russian Federation, 2021 winter wheat acreage is up on a yearly basis, surpassing initial expectations. Although warm and dry weather in December raised the risk of winterkill and possibly higher abandonment rates, heavy snowfall in January partly abated these concerns.

In India, the area sown to wheat increased to a record level, underpinned by strong prices and continued government support, as well as satisfactory crop conditions, owing to well-distributed monsoon rains, which portend good yields in 2021.

Optimistic conditions also prevail in Pakistan, where wheat sowings are above average, driven by government support, in the form of subsidized access to inputs, and higher crop prices.

Based on January field reports, wheat crop conditions in China are favourable and production in 2021 is expected to remain near average levels. In Turkey, the leading producer in the Near East region, less-than-ideal weather conditions are constraining crop prospects.

In the southern hemisphere, 2021 coarse grain crops are expected to be harvested from the second quarter of the year. In Brazil, 2021 maize production is officially forecast at 102.3 million tonnes, slightly short of the 2020 record output but well above the five-year average.

The outlook is based on a likely increase in the second season harvest that would offset a lower first-season crop due to dry conditions and reduced planted area. Similarly, maize production in Argentina is set to decline in 2021 from the 2020 record level, due to rainfall deficits in main producing provinces, but is still foreseen at an above-average level.

In South Africa, driven by better remunerative prices, maize plantings have increased and the production outlook has been further bolstered by favourable yield prospects owing to good rainfall. Production expectations in neighbouring countries are similarly favourable, though recent cyclones have increased the risk of crop losses.

Cereal utilization, stocks and trade in 2020/21

Prompted by China’s unexpectedly large imports of maize so far this season, FAO decided to undertake a further review of its maize supply and demand balance sheet for China.

In addition to China’s substantial increase in maize imports, persistently higher domestic maize prices (as compared to international prices) on top of a swift recovery in pork production from the African swine fever (ASF) disease point to much higher feed utilization in China than earlier anticipated, and hence a much greater drawdown of stocks than earlier estimates suggested. Building on the official production and trade estimates, it was necessary to make balance corrections not only for the current season but also for previous seasons, starting from the 2013/14 marketing season. Indeed, given China’s importance in terms of its share in global maize stocks and consumption, the adjustments also heavily effected FAO’s estimates for world utilization and stocks.

At 1 493 million tonnes, global coarse grain utilization in 2020/21 is forecast 37 million tonnes (2.6 percent) above the previous season’s level and up as much as 16.6 million tonnes since December on greater-than-earlier-expected feed use, especially in China.

This month’s downward revision stems mostly from lower forecasts for feed use in the European Union as a result of high prices causing a substitution to other coarse grains for feed.

Global rice utilization in 2020/21 is now pegged at 512.1 million tonnes, up 1.8 percent from 2019/20 and 1.9 million tonnes more than previously reported following upward revisions to food intake forecasts for the Americas and Africa and to feed use in China.

FAO’s new forecast for world cereal stocks stands at 802 million tonnes, down as much as 64.3 million tonnes from December and 17.8 million tonnes (2.2 percent) from their opening levels and the smallest in five years.

The year-on-year contraction stems from a massive downward adjustment to maize inventories in China, which are now pegged at around 139 million tonnes, down nearly 54 million tonnes from the December forecast and 11.6 million tonnes below their opening levels.

In addition to China, FAO forecasts for maize inventories in Argentina, the European Union, India, and, most significantly, the United States of America, were also trimmed since December.

In contrast to coarse grains, world wheat inventories are forecast to increase by 7.2 million tonnes (2.6 percent) above opening levels, reaching 284.3 million tonnes following an upward revision of 1.4 million tonnes from December, mainly on the expectation of larger stocks in Australia and the Russian Federation.

The bulk of the year-on-year increase in wheat stocks is seen in China, as excluding China, global wheat inventories are set to decrease for the third consecutive year. World rice stocks at the close of 2020/21 are forecast at 181.9 million tonnes, on par with their opening levels and 800 000 tonnes more than anticipated in December.

Upward revisions to the stock forecast were introduced primarily for China this month, followed by Bangladesh, while carry-over expectations were cut namely for India and the United States of America.

The FAO forecast for world cereal trade in 2020/21 has been raised by as much as 10.6 million tonnes since December to 465.2 million tonnes, representing a hefty 25-million-tonne (5.7 percent) expected expansion from the previous season’s record high.

Trade-in all major cereals is foreseen to increase in 2020/21. Continued large purchases of maize and barley by China, to meet rising feed demand has pushed up the coarse grains 2020/21 (July/June) trade forecast by nearly 10 million tonnes since the previous forecast, now pegged at a record 232.3 million tonnes, up almost 22 million tonnes (10.2 percent) from last year’s level.

Maize imports by China have been revised up by 10 million tonnes since December to an all-time high of 20 million tonnes. The revision reflects exceptionally large purchases in recent weeks, primarily from the United States of America. World wheat trade in 2020/21 (July/June) is forecast at 184.5 million tonnes, nearly unchanged from December and similar to the 2019/20 estimated level.

International trade in rice is anticipated to expand by 7.9 percent in 2021 (January-December) to 48.4 million tonnes, which is 800 000 tonnes more than forecast in December.

The revision reflects prospects of continued strong growth in exports by India; while on the import side, it mirrors expectations of an upturn in purchases by the Far East, led by Bangladesh, following the approval of duty remissions by the country.