KASI’s global CCI improved by a single point in January driven by advancement in the index of current economic conditions which moved up by 4 points while the index of future expectations remained unchanged.

The job prospects index witnessed the largest gain in January rising by 8 points. The household income and the general economic conditions indices for the city and country all increased by 1 point. On the contrary, both the household spending and discretionary spending indices stumbled by 2 points while the household personal financial situation index fell by 3 points 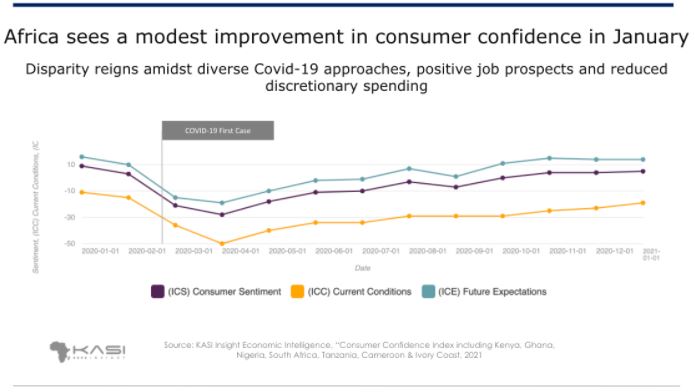 Consumer confidence in Africa had a modest improvement rising by 1 point from 4 to 5 for the 1st month of the year. As the index of future expectations stalled at 14 from the previous month, this improvement in the CCI can be fully attributed to the index of current economic conditions which grew by 4 points climbing to -19 from -23.

The experience in recent months has been mixed for African households. Governments have taken diverse approaches in managing their countries depending on the Covid-19 situation. In Ghana, for example, the government reintroduced measures in January due to rising cases including restricting restaurants to operate only on a take-away basis. 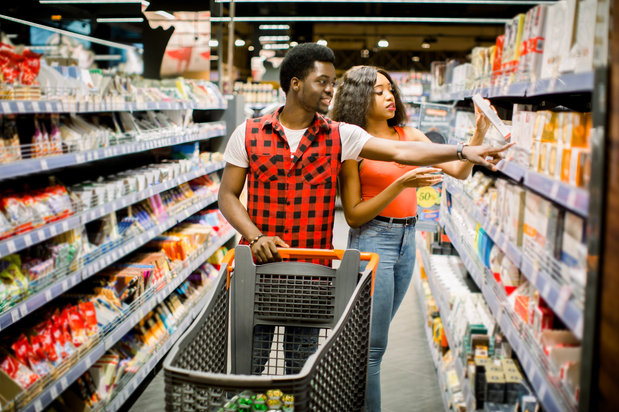 At the same time, governments in countries like Kenya and Nigeria have fully reopened schools as the Covid-19 situation is not as dire as that in some of their counterparts.

Furthermore, the emergence of Covid-19 mutations from South Africa and the United Kingdom that are considered to be more deadly has meant that individuals from these countries, or those transiting through these countries, have been banned from entering certain countries or face stricter restrictions.

All these occurrences have elicited varied feelings within African households.

Households report optimism on their job prospects while discretionary spending subsides after picking up pace in the last quarter of 2020.

The mixed perception of the state of the economy is also reflected in the various sub-indices focusing on the economic and financial situation for households.

After slipping by a single point in December, the job prospects index rebounded by 8 points in January from -51 to -43 which is the highest level recorded since the outbreak of the pandemic in March last year.

Similarly, the general economic condition indices for both the city and country and the household income index all bounced back by 1 point after sliding in December.

Whereas the personal financial situation and discretionary spending indices heightened towards the end of 2020, this trend failed to be maintained in 2021 as both indices shrunk by 3 and 2 points respectively.

With the Christmas shopping season concluding, households’ reduced expenditure on discretionary goods hence leading to the weakening of the discretionary spending index which had experienced growth in the last quarter of 2020. Negative momentum was also reported for the purchasing power index which contracted by 2 points in January.

Akin to last month, consumer confidence across the countries tracked in our index was varied. Consumer confidence in Cameroon, Nigeria, South Africa, and Tanzania heightened in January with Tanzania being the best performer as its index progressed by 7 points from 24 to 31 after shrinking in December.

The boost in Tanzania’s consumer sentiment can be attributed to both the index of future expectations and the index of current economic conditions which strengthened by 6 and 11 points respectively. Apart from the discretionary spending index that fell by 4 points, all the other sub-indices for Tanzania advanced.

The biggest increase was in the job prospects index which surged by 26 points attaining its highest level of 7, last recorded in February 2020. Household personal financial situation and income indices rose by 3 and 10 points respectively while the purchasing power index increased by 5 points.

Finally, Tanzania’s general economic condition indices for the city and country climbed by 5 and 7 points respectively. While the recovery in consumer sentiment is a good sign for the Tanzanian economy, the country’s Covid-19 situation is bleak. Communication on the Covid-19 numbers by the government has been absent since April 2020.

Moreover, the various protocols to prevent the spreading of the virus are lacking. As such, governments across the world have issued travel warnings to Tanzania as Covid-19 cases and related deaths have grown significantly in recent months.

For Ghana, Ivory Coast, and Kenya, their consumer sentiment backpedalled in January. The largest drop in consumer confidence was in Ivory Coast which regressed by 5 points after growing in December.

In January, the European Union announced that it is expected to ratify laws aimed at environmental protection and the mitigation of child labour in cocoa production later in 2021.

While this is positive news for Ivory Coast’s social protection, it may not go well for cocoa production especially as Ivory Coast is one of the world’s top exporters of cocoa with Europe being the biggest destination for the country’s cocoa exports.

The possibility of stricter laws applied to its cocoa production may have affected consumers’ future expectations of the economy hence driving down consumer confidence.

The modest improvement in the continent’s consumer confidence index suggests that there is some optimism within African households.

However, the disparity of consumer sentiment across the various countries implies that the positive outlook is not uniform across the continent, and as such, instead of looking at the continent’s overall outlook, businesses must also examine the consumer outlook at the country level.

“With the performance of consumer sentiment differing across countries, there is no universal picture that can be painted for retailers operating in Africa. Retailers will need to consider the context within which they operate and make decisions based on these considerations as well as their organizational strategy and objectives.”

Nigeria, 19 November 2020 - Against the backdrop of the unprecedented COVID-19 pandemic, West African consumer sentiment has experienced a lift of 8 points in...
Read more

KASI’s global CCI (Consumer Confidence Index) fell by 4 points from -3 to -7 this month. This was led by the decline in the...
Read more
- Advertisement -