At the close of today’s trading session, the NSE ASI had grown by 0.98% from yesterday’s position. The index closed upwards at 39,085.78 points, although its year-to-date performance is still in the red at -2.94%.

The market capitalization also grew by the same magnitude, gaining ₦199bn to settle at ₦20.45 trillion.

Investor sentiment improved from yesterday, as illustrated by the increase in market breadth market from 0.95x to 1.25x, as 20 stocks advanced in price while 16 stocks declined. 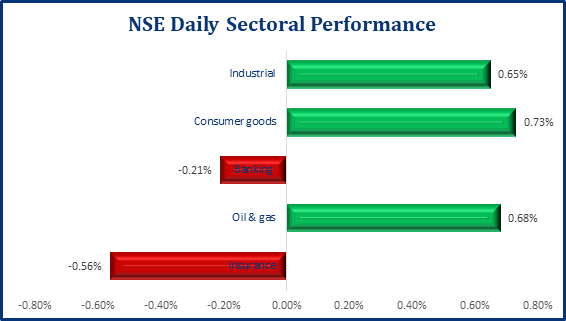 Read Also:  NSE notifies of Lifting of Suspension Placed On The Trading In The Shares of Universal Insurance Plc