Mercedes-Benz to source CO2-free electricity from Solar, Wind and Hydropower from 2022 Onwards

Another milestone towards CO2-neutral production and implementation of Ambition 2039 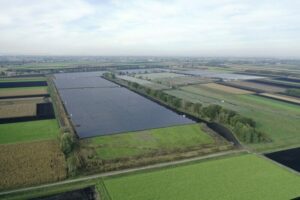 Mercedes-Benz is expanding its green power portfolio in cooperation with the energy supplier Enovos and the Norwegian energy producer Statkraft. This means that from 2022 onwards, the company will purchase electricity in Germany which comes exclusively from renewable sources. A green power supply contract ensures the purchase of electricity from renewable energy sources at all times.

The CO2-free electricity from solar, wind and hydro sources is generated in various power plants, most of which are located in Germany. These include a part of a solar park with a size of 60 football pitches near Ingolstadt and 24 wind farms with a total of more than 200 wind turbines.

The electricity generated from this is roughly equivalent to the amount consumed by 65,000 households annually. The intelligent mix is supplemented by electricity from flexible hydropower plants.

The generation of green electricity is synchronised to follow patterns of consumption so that a supply from the grid with green electricity can be guaranteed on a quarter-hourly basis. In many previous green power contracts, feed-in to the grid takes place purely on an annual balance basis.

A green power concept of this type and scale is so far unique in Germany. It enables the subsidy-free construction of the solar park as well as the continued operation of the wind turbines, which will no longer be subsidised under the Renewable Energy Sources Act (EEG) from this year.

In 2018, Mercedes-Benz was the first major industrial customer in Germany to secure the long-term continued operation of six wind farms in northern Germany after the end of the EEG subsidy through a similar concept. The first Mercedes-Benz locations are already being supplied with this CO2-free electricity.

“The global production of Mercedes-Benz will be CO2-neutral at its own plants starting in 2022. As of next year, electricity purchased for our plants will also come exclusively from renewable sources – in other words, 100 percent green electricity worldwide.

Read Also:  Why Nigerians are not buying Innoson cars - Investigation

The expansion of the green power portfolio in Germany is an important basis for this”, says Jörg Burzer, Member of the Board of Management of Mercedes-Benz AG for Production and Supply Chain Management.

In Germany, green electricity procurement is ensured not only for passenger car production plants but for all Daimler locations. This also includes the German van, truck and bus plants as well as the central and administrative units – more than 100 locations in total. The company is thus making a significant contribution to the expansion of renewable energy in Germany and to the energy transition.

Mercedes-Benz pursues a sustainable, integrated business strategy. The company looks at the entire value chain: from development, supplier network, production, to the electrification of products and beyond, and how renewable energy is used by electric vehicles.

With Ambition 2039, Mercedes-Benz is pursuing the goal of a fully connected and CO2-neutral vehicle fleet in 2039 – eleven years earlier than required by EU legislation. The company envisages that more than 50 percent of its passenger car unit sales will be accounted for by plug-in hybrids or all-electric vehicles by 2030.

An important milestone is a CO2-neutral production in all Mercedes-Benz AG’s own plants worldwide as of 2022. To achieve climate-neutrality, Mercedes-Benz will seek to reduce or avoid emissions generated during Mercedes-Benz vehicle production or for the energy supply of the plants.

The purchase of green electricity is an important part of this. From 2022 onwards, all of Mercedes-Benz AG’s own production plants worldwide will therefore exclusively procure electricity from renewable sources. To implement CO2-neutral production, the company relies not only on the use of green electricity but also on a continuous increase in energy efficiency and the implementation of a sustainable heat supply.

All other Daimler Trucks & Buses plants worldwide will follow. In concrete terms, this means that the existing truck and bus plants will only obtain their purchased electrical energy from renewable sources.

Anniversary and premiere at Mercedes-Benz: The first new Mercedes-Maybach S-Class from Factory 56 is also the 50-millionth car from Mercedes-Benz to roll off the...
Read more

Mercedes-Benz Drops to the Third Spot in US Luxury Car Sales Amid 13% Sales Decline in 2020 It was a close race right to the...
Read more
- Advertisement -