The year 2021 has started off on a high note for electric vehicle (EV) funding and it seems set to break the previous year’s records.

According to the research data analyzed and published by ComprarAcciones.com, the month of January 2021 alone saw funding deals worth approximately $6.45 billion in the industry. These included SPAC mergers, IPOs, funding and acquisitions.

2020 set off a new trend for electric vehicle (EV) companies, many opting to go public via Special Purpose Acquisition Companies (SPACs). Among the key EV names that took this route were Nikola, Hyliion Holdings, Fisker, Lordstown Motors and QuantumScape.

Based on Bank of America’s projection, the transition towards full vehicle electrification might cost more than $2.5 trillion in global investment over the coming decade. SPACs are just one of the ways to raise the required capital.

In January 2021, EV charging network EVgo announced a merger with Climate Change Crises SPAC. Based on the terms of the deal, EVgo would receive $575 million from the merger. Under the deal, which is set to close in Q2 2021, the combined company value would be $2.6 billion.

Electric bus maker Proterra also announced a SPAC merger with ArcLight Clean Transition Corp. The transaction is set to raise $825 million and the enterprise value will be $1.6 billion once it closes in H1 2021.

Meanwhile, battery cells developer FREYR announced a SPAC merger with Alussa Energy Acquisition Corp. It will receive $850 million in equity proceeds and the combined company will be worth about $1.4 billion.

There had been a nearly fivefold increase in share price since January when reports of the anticipated Lucid Motors – CCIV deal began circulating. Following the merger announcement however, shares of the latter took a 38.6% plunge.

In February 2021, Volta Industries, which is another charging station network, announced a SPAC merger with Tortoise Acquisition Corp II. Valued at $2 billion, the deal will rake in $600 million for Volta.

Additionally, electric truck startup Xos also struck a $2 billion deal during the month with NextGen Acquisition Corp. It expects to receive $575 million in proceeds from the merger. Battery maker Microvast agreed to a merger with Tuscan SPAC in a deal that will value the combined entity at about $3 billion. It will receive $822 million in cash proceeds following the merger.

The massive upsurge in EV SPACs and capital raises comes as no surprise in view of anticipated demand. In the US, for instance, the President announced plans to replace the entire federal fleet of vehicles with EVs. That is a total of 645,047 vehicles. Shanghai, on the other hand, plans to have EVs account for 50% of all new vehicle purchases by 2025. By that time, all its public buses, delivery trucks, taxis and government vehicles will be electric.

The 2021 SPAC boom is not limited to the EV industry alone. Based on data from SPAC Insider, 145 SPAC IPOs had raised a collective $44.5 billion+ this year as of February 17, 2021. According to the research firm, average deal size at the time was $307 million.

Comparatively, there had only been 55 traditional IPOs during that time, having raised $21.7 billion according to Renaissance Capital. 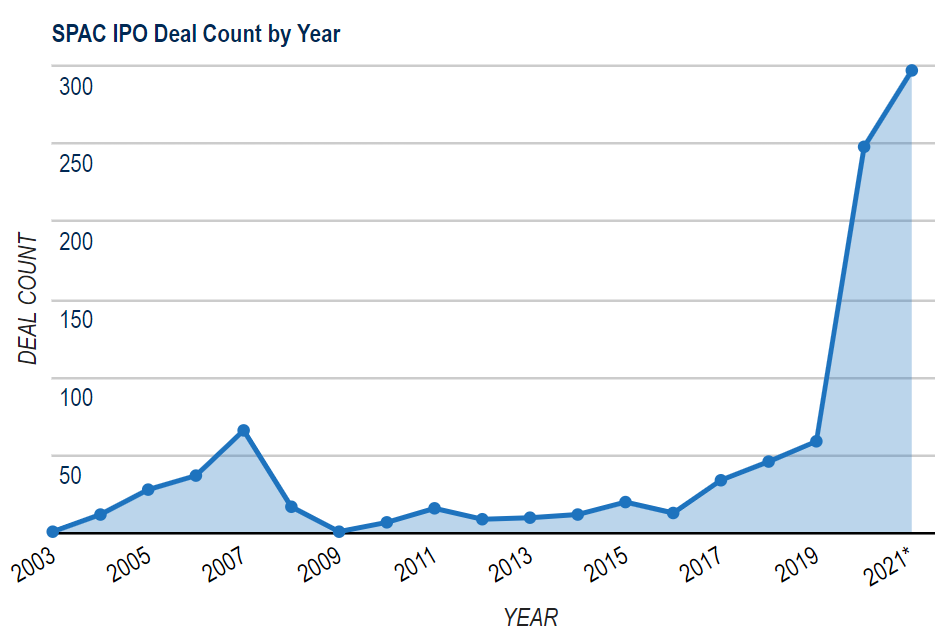 However, the rate at which these blank check companies are pricing is higher than the pace at which they are finding targets. At the time, only 43 out of the 145 SPACs had announced merger targets.