Aston Martin, the British luxury car manufacturer, has teamed up with the British Royal Airforce for a Red Arrows limited edition.

Aston Martin is no stranger to aviation special editions of its cars – last year saw not one but two emerge from Gaydon, Warwickshire: the Vantage S Blades Edition, a collaboration with Blade British aerobatic team, and the V12 Vantage S Spitfire 80 special edition to mark the 80th anniversary of Britain’s iconic warplane.

The Red Arrows version, resplendent in a fitting shade of red, is based on the Vanquish S coupe but has been modified by the company’s bespoke “Q” division to be worthy of carrying the moniker of the Airforce’s aerobatic unit.

Just ten examples will be made (with only nine going on sale), all of them finished in “Eclat Red”, the same applied to the team’s Hawk trainer aircraft, however, the roof section will be left to reveal its carbon-fibre construction and decorated with the design seen on the canopy of the jet. Further echoing the antics of the aerobatic team, Aston has applied a white “smoke trail” finish onto the side of the car, complemented by other white and blue carbon details. 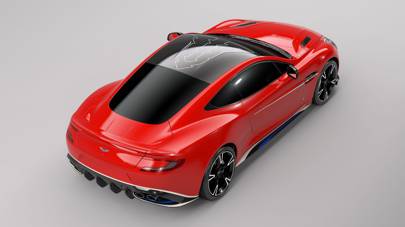 Inside, there are further RAF and Red Arrows nods – seat fabric, similar to that seen on a Martin-Baker ejection seat, green webbing seatbelts, the Royal Air Force Aerobatic Team logo embroidered onto the transmission tunnel and even the door cards have been modified to show a graphic of the “Vixen Break” nine-aircraft formation. Aston has also taken the One-77 steering wheel and pimped it to feature an RAF-inspired switchgear.

If you do bag one of the Red Arrows special editions, there are some extras to consider, such as racing suits, helmets, a luggage set, embroidered bomber jackets and a 1:18 die-cast model of your car and the Hawk aircraft.

While Reds one through nine are available to purchase through Aston Martin Cambridge, a final tenth Vanquish S Red Arrows will be gifted to the RAF Benevolent Fund to be raffled in aid of former servicemen and women. The raffle will be £20 a ticket and you can enter the draw here.

3 Trends That Will Dominate African Mobile Apps In 2022

Innovations That Will Reshape Business In The Future

Brand Spur - January 19, 2022 0
The Nigerian equities market closed in green at the end of yesterday's trading session as the benchmark index improved by 0.58% to close at...

3 Trends That Will Dominate African Mobile Apps In 2022

The Next Big Thing From Toyota Is On The Horizon