PIPELINES and Products Marketing Company, PPMC, a subsidiary of the Nigerian National Petroleum Corporation, NNPC, earned N132.04 billion from the sale of white petroleum products in the month of July 2017. 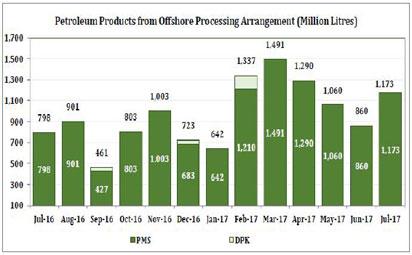 The NNPC, in its July 2017 Monthly Financial and Operational Report disclosed that the PPMC revenue for July represented a decline of 9.34 per cent compared to N142.65 billion recorded in the previous month.

Also, the report disclosed that  the refineries recorded an operational deficit of N8.52 billion in the month under review. It stated: “The NNPC has been adopting a Merchant Plant Refineries Business Model since January 2017.  The model takes cognizance of the products worth and crude costs. The combined value of output by the three refineries (at import parity price) for the month of July 2017 amounted to N24.83 billion while the associated crude plus freight costs and operational expenses were N24.13 billion and N9.21 billion respectively.

“This resulted in an operating deficit of N8.52 billion by the refineries. Also, during the period under review, refineries combined capacity utilization was 11.94 per cent with Port Harcourt Refining Company, PHRC, recording the highest capacity utilisation of 24.18 per cent.”

As a result of the unimpressive performance of the refineries and the decline in earnings from the sale of the petroleum products among others, the NNPC recorded a significant drop in its top and bottom line figures in the month under review. Particularly, its operating revenue for July declined by 8.9 per cent to N269.3 billion, compared to N295.75 billion recorded in June, while its trading deficit worsened to N11.87 billion, compared to a deficit of N5.19 billion.

“The NNPC recorded a trading deficit of N11.87 billion which is an additional loss of N6.68billion relative to the previous month’s deficit of N5.19 billion.”

It added that the non-availability of some of the major secondary units in PHRC in July 2017 accounted for the non-production of some light end product with the corresponding increase in operating expenditure, OPEX, as a result of several maintenance interventions.

Towards the end of the previous week, Nigerians woke up to the news that the Nigerian downstream petroleum sector had been fully deregulated by...
Read more

In the just concluded week, crude oil prices increased given the commitments made by the Organisation of the Petroleum Exporting Countries (OPEC) and their...
Read more

Has The Dynamics Of The Oil Market Changed?