The assets under management (AUM) of the Nigerian regulated pension industry increased by 22.0% y/y in December to N7.52trn (US$24.6bn) and by 1.5% m/m. They are growing at a decent rate yet, at just 6.7% of GDP for the 12 months through to Q3 2017, are running well behind many emerging markets. Data from the National Bureau of Statistics show that 7.71 million Nigerians were covered by contributory schemes in December, equivalent to 13% of the workforce. The target of 30% coverage by 2024 appears elusive without strong PenCom leadership.

The industry’s holdings of FGN paper amounted to 69.5% of their AUM in December, compared with 72.2% one year earlier. The beneficiary has been domestic money market instruments, the share of which gained 2.7% over the 12-month period.

The role of the PFAs in local debt markets remains pivotal. Their holdings of FGN bonds at end-December represented 48.0% of the stock of the instruments at end-September.

PenCom’s latest data do not point to a surge of investment in domestic equities. The NSEASI rose by 42.3% in 2017 while AUM in the asset class increased by 34.3% over the same period.

The sharp increase in daily turnover on the exchange since the start of the year said anecdotally to be driven in good measure by local investors, may yet result in a pick-up in the share of equities. 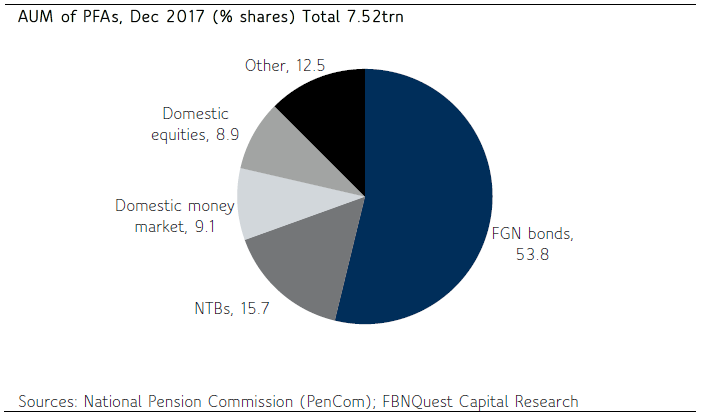 Given the sharp fall in yields on FGN paper over the past six months, there is a potential tipping point at which multi-asset class investors shift to domestic equities. We also note the dilemma for the banks, which will be looking to compensate for the once substantial revenue stream from holdings of NTBs.

Ondo State Government has committed about #5 billion to payment of Pension and Gratuity owed retired Public Servants in the state since the year...
Read more

The Contributory Pension Scheme is an excellent scheme that ensures you and your employer contribute towards your retirement. The contributory idea is perfect where...
Read more

The total pension assets under the Contributory Pension Scheme (CPS) as at 31 August 2019 is N9.6 trillion. This was disclosed by the Head of...
Read more

Micro Pension: A catalyst to Pension Industry in Nigeria

A society is often measured by how it cares for its senior citizens. Government is constantly seeking ways to improve the lives of its...
Read more
- Advertisement -