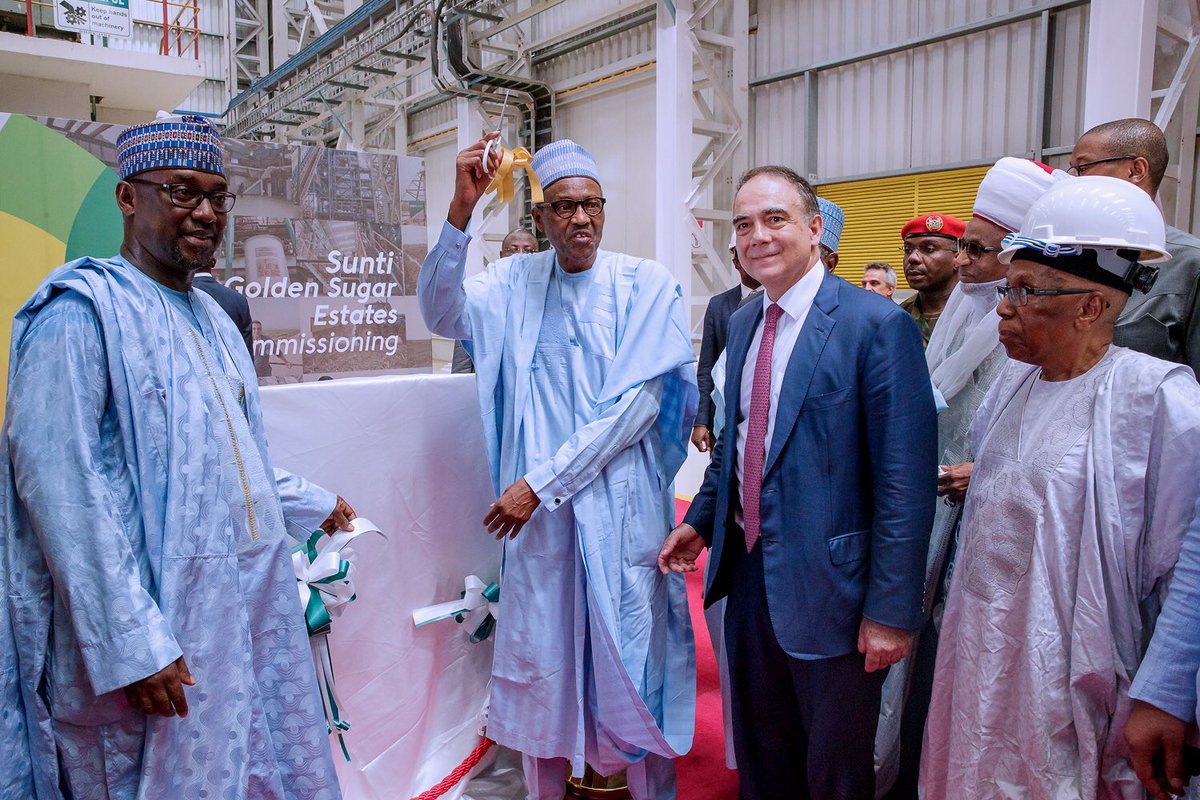 Here are the key facts…

Currently, 3,000 hectares with the majority of the area enclosed within a 35-kilometer dyke offering flood protection from the River Niger. Sugar cane is cultivated under irrigation, making it an annual crop, with 276 ha furrow, 700ha pivot and the balance under sprinkler irrigation. Irrigation power demand is around 3MW coming from 12 irrigation pump station connected to the Factory by a newly constructed power grid of 30 kilometers. Cultivation behind a dyke requires drain pumps to evacuate rainwater during the rainy season. 4 Nos. drain pump stations will be in operation with a joint water lifting capacity of 13 cumecs (13,000 liters per second). Over N1 billion investment in drain pumps

Cane is harvested by hand and transported by road to the Factory utilizing haulage tractors pulling a pair of tandem trailers with a capacity of 30 tons of cane. At full capacity, the harvest season will run from November to April each year, cutting 1 million tons of cane per season. Equipment (Mill)

4 state-of-the-art mills driven by electrical variable speed motors and controlled using a Distributed Control System for extraction of the juice from the fiber.

Read:  Flour Mills Plc Affirm To Increase Its Revenue To N1.2 Trillion In Next 5 years

Comprises of 2 units with Maximum Continuous Rating (MCR) of 37 tons (steam) per boiler generated at a pressure of 45 bar (a) and at a temperature of 415◦C. The remaining cane fiber from the mill is moved to the boilers where it is burned to generate steam.

6MW of electrical power is generated from the turboalternator driven by the steam from the boilers. Output: 100,000 tons of sugar annually at full capacity at Pol% >99.3 (measurement of the true amount of sucrose) and color within the range of 800-1200 ICUMSA (Internationally recognized method of determining sugar color).

More than N50 billion has been invested in Sunti so far making it the largest Agro Allied investment in Nigeria so far.

Current employment is 3,000 people mainly sourced from the surrounding communities. Once development is completed 10,000 people will be employed.

The 30-kilometer road from Mokwa was done and communities use the vast network of estate roads built to reach their villages. CSR projects have been done installing drains, culverts, and roads around host communities. Flood protection walls have also been installed at Ketso community.

There are 28 communities from Mokwa, Rabba, and Sunflag in the West and Ketso in the East impacted by the project, with 12 communities in the immediate. surrounding of SGSE. Efforts are focused on the provision of drinking water through boreholes, tanks, and water reticulation, as well as schools. 5 Nos. surrounding villages have already been provided with water and 3 schools constructed. The Company further supports schooling by providing teachers, school uniforms, desks n other educational equipment.SGSE will also embark on a fish-rearing project 2 stock surrounding ponds and lakes with fish to sustain community activities related to fishing.

The capacity of the expanded factory is 1 million tons of cane per season. It is envisaged that a substantial portion of this supply will come from outgrower cane. We have initiated a pilot outgrower scheme, that is planned to be operational in the next 12 months, to find the best model to continue this development. FMN has over the last decade significantly invested in Food and Agro-allied value chains ensuring maximization of local content in our final products and have consistently remained committed to the policy of being involved in all stages of the food value chain. The Estate comprising the plantation and the mill is FMN’s Backward Integration programme under the National Sugar Master Plan (NSMP) towards the attainment of locally produced and refined sugar. The official commissioning is a pivotal event key in propagating not only the significant investment in the Mill but also the FMN growth and backward integration tory to all stakeholders. SGSE is FMN’s single biggest investment since inception in 1960, it’s vision for agro-industrial transformation.

In addition to the Sugar value chain, FMN has also embarked on significant Backward integration investments in the Cassava/Sorghum/Wheat value chain as well as the Edible Oil (Palm and Soybean) value chain

The United Arab Emirates Ministry of Health has announced a diagnosis of a coronavirus case in a family from Wuhan in China – the...
Read more
Business & Economy

The National Insurance Commission (NAICOM) anticipates several M&A transactions in Nigeria in 2020. No lesser than six insurance companies have notified the regulator of...
Read more
News

In terms of road safety, Africa is not the example to follow. According to the WHO report, the continent registered a road-traffic mortality rate...
Read more

…Sanwo-Olu: ‘It’s A New Journey Toward Developing Lagos’ Lagos State Government has opened a new chapter in its stride towards attaining self-sustenance in finance...
Read more

The United Arab Emirates Ministry of Health has announced a diagnosis of a coronavirus case in a family from Wuhan in China – the...
Read more

The National Insurance Commission (NAICOM) anticipates several M&A transactions in Nigeria in 2020. No lesser than six insurance companies have notified the regulator of...
Read more