The latest smartphone OS data from Kantar Worldpanel ComTech reveals that in the three months ending March 2018, competition within Android continued to intensify as Huawei and Xiaomi expanded their global presence. Meanwhile, iOS share has held steady across the big five markets in Europe and the USA in contrast to continuing growth in urban China.

Dominic Sunnebo, Global Director for Kantar Worldpanel ComTech comments, “With Huawei’s entry into the USA market effectively blocked by the government the business has increased the focus and resources it is aiming at Europe. Despite the well-reviewed Huawei P20 flagship not being released until April, the results are already showing. Huawei has managed to significantly increase its presence across the big five European markets and it now holds almost a fifth of sales in the three months to March 2018 – 19.0%, up from 14.4% a year earlier. Most encouraging for Huawei are the signs that progress is finally being made in Great Britain, with share rising to 5.9% – it needs to conquer this market if it’s going to realize its ambition of becoming a premium choice for consumers.” 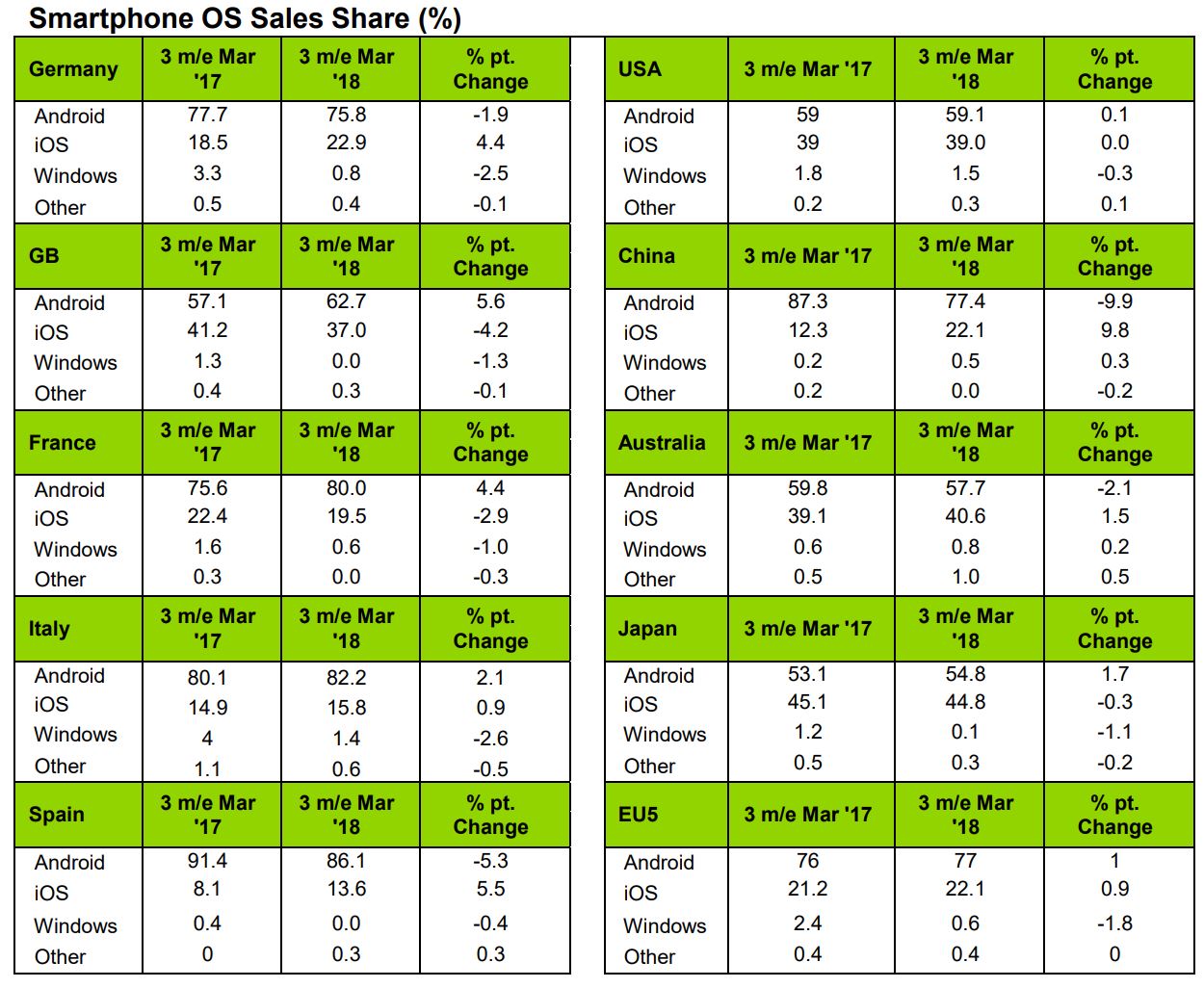 The top three brands in the big five European markets, Samsung, Apple, and Huawei, made up 71% of smartphone sales in the latest quarter, but newcomer Xiaomi has quietly taken the fourth spot, with a 4.4% share. This is made all the more impressive given that growth has come predominantly from just two markets, Spain and Italy.

Dominic Sunnebo continues, “Despite being a household name in China and India, Xiaomi has turned its attention to Europe late, though it has quickly proven to be a worthy opponent. In Asia, Xiaomi’s business model has been focused online and while this remains an important factor in its European model it is local partnerships with key players like Media Markt, Media World and Carrefour that has allowed it to accelerate sales so quickly.”

In the USA, Apple and Samsung have managed to eke out year-on-year share gains, up 0.1% and 1.4% respectively. Google has achieved its highest ever quarterly sales share of 3.4%, up from 1.7% a year earlier, thanks to the success of its Pixel line. ZTE, also under pressure from the US government, saw its sales share fall to 2.5% in the latest quarter.

In the USA and the European top five markets, Apple iPhone 8 sold in marginally higher numbers than the flagship iPhone X, indicating that as early iPhone X demand is fulfilled the price difference between the two devices is playing a notable role in consumers’ choices. In urban China, iPhone X continues to be not only Apple’s top-performing model but the best-selling model in the market, helping Apple share to increase strongly to 22.1%.