Today we turn our attention to Nigeria’s power sector, which remains topical given its relevance to the much awaited industrial take-off. The cost of self-energy generation weighs heavy on household pockets and continues to eat into the profit margins of businesses operating in Nigeria. Power generation capacity from the grid is c.7, 000MW while distribution capacity is still c.5, 000MW. Meanwhile, the FGN estimates national energy demand at 22,230 megawatts (MW). 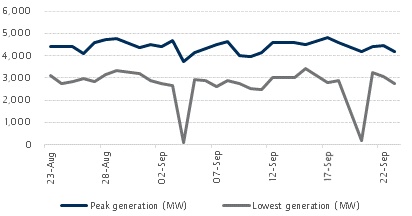 The Nigerian National Petroleum Corporation (NNPC) has recorded an increased trading surplus of ₦20.36billion in July 2020 compared to the ₦2.12billion surplus in June...
Read more

The Nigerian National Oil Organization (NNPC), on Sunday, said it made a sum of $4.60billion from raw petroleum and gas sent out between June...
Read more