2018 Year In Review: Nigeria Did Not Fare Well In Job Creation, Infrastructural Development And Economy – Report

A new public opinion poll released by NOIPolls reveal that Nigerians believe that the country has not fared well mostly in the areas of Job Creation (89 per cent), Infrastructural Development (65 percent) and the Economy (63 percent). On a brighter note, 69 percent of Nigerians believe that the country has fared well in the area of agriculture in 2018. Job creation as a burning issue comes as no surprise considering the rising rate of unemployment in Nigeria. According to a National Bureau of Statistics (NBS), unemployment rates rose from 16.2 percent in 2016 to 18.8 per cent in 2017.

Infrastructural development is not only a crucial driver for progress but is also a critical enabler of productivity and sustainable economic growth. For example, the constant electricity shortages, housing issues, rail lines, lack of proper road networks both inter and intrastate, water and sanitation infrastructure have a direct impact on the overall economic growth of the country. According to the Federal Mortgage Bank of Nigeria (FMBN), the country needs to build 720,000 units of houses per annum at a cost of N56 trillion per annum to close our housing gap. In the same vein, electricity, rail systems, airports, seaports are equally begging for financial attention and the implication of these is that the country needs several trillions of naira to address its infrastructural deficits. 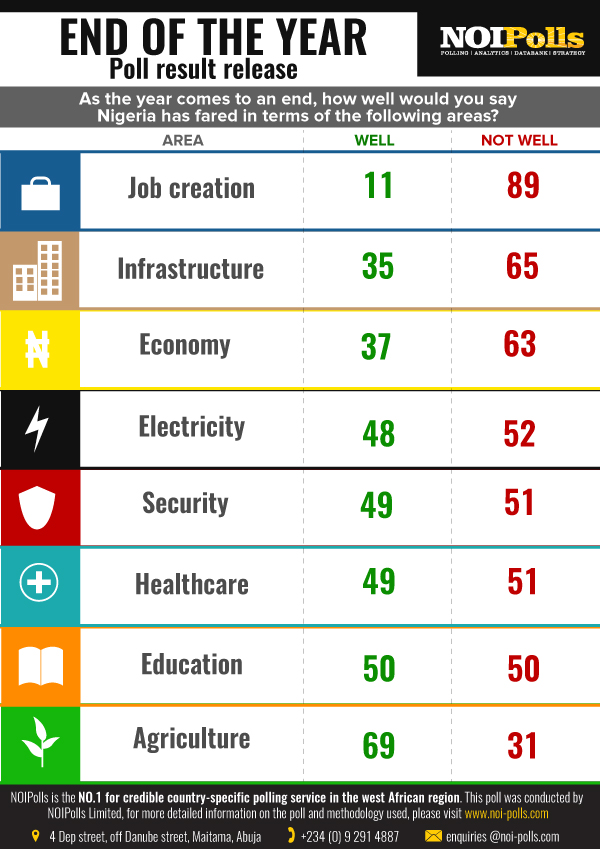 On the economy, the National Bureau of Statistics (NBS) reported that the nation’s Gross Domestic Product (GDP) grew by 1.81% (year-on-year) in real terms in the third quarter of 2018, however, the average Nigerian is yet to feel the impact of this marginal increase. For instance, the African Development Bank report on Nigeria’s Economic Outlook 2018 revealed that about 152 million Nigerians live on less than 2 dollars a day, representing about 80 percent of the country’s estimated 190 million population. The report further indicated that the country still faces significant challenges in foreign exchange shortages, disruptions in fuel supply, power shortages and insecurity in some parts of the country amongst other challenges. Finally, given the high unemployment rate faced by Nigerians, it is therefore essential that the issue of the infrastructural deficit is addressed in order to create an enabling environment for job creation. This will in turn help increase financial security and promote better standards of living of Nigerians, stimulate economic activities as well as reduce poverty and crime in the country. These are the key findings from the End of Year Poll conducted by NOIPolls in the week of December 10th 2018.

End of the year for a typical Nigerian is a period for different celebrations, with diverse festivities ranging from parties to carnivals, social gatherings, family/school reunions, cultural fairs to annual sporting and/ art events, etc. To some Nigerians, it is a time to reflect on what they have achieved thus far and what to expect in the coming year. Against this background, NOIPolls conducted this poll to gauge the perceptions of Nigerians on how the nation has fared in 2018, focusing on some key socio-economic areas.

Respondents’ opinions were assessed on how Nigeria has fared in 2018 on eight specific areas and the poll revealed that 89 percent of Nigerians reported that job creation has not improved in the year. This is followed by respondents (65 percent) who indicated that the country has not fared well in term of infrastructural development which is key to industrial and economic growth of any nation. On the economy, 63 percent of respondents stated that the nation has not fared well in this area despite the marginal increase in the country’s GDP in quarter 1, 2018 as reported by the National Bureau of Statistics. Other areas Nigerians believed have not improved in 2018 are electricity supply (52 percent), security (51 percent) and Healthcare (51 percent).On the other hand, 69 percent of Nigerians admitted that the country has fared well in the area of agriculture in 2018. For instance, data from Trade Economics revealed that GDP from Agriculture in Nigeria increased to 5.2 million Naira in the third quarter of 2018 from 3.7 million Naira in the second quarter of 2018. GDP from Agriculture averaged 3.8 million Naira from 2010 until 2018, reaching an all-time high of 5.2 million in the third quarter of 2018.

In conclusion, the poll revealed that most Nigerians consider job creation, infrastructural development and the economy as the critical areas that have not fared well in 2018. The government and concerned stakeholders must synergize to address these critical challenges especially as another year approaches. For instance, fixing these infrastructural challenges will attract more foreign direct investments, create millions of jobs, help to create new markets, foster competition, spur innovation, lower prices, raise productivity and in turn leads to increase in standard of living. Due to the high cost of infrastructural development, it is advisable that a public private partnership should be adopted to make needed funds available to tackle these challenges.

The National Bureau of Statistics (NBS), says the total value of capital importation into Nigeria stood at $5,854.38m in the first quarter of 2020....
Read more

In the latest report from the National Bureau of Statistics (NBS), the overall consumer price index - a measure of the average change in...
Read more
- Advertisement -