We are forecasting that headline inflation will increase to 11.37% in December from 11.28% in November. If our projections are actualized, it will mean that directionally the change in annual inflation is now becoming a trend. Typically, December is a period in which higher festive related spending pushes up aggregate demand in the economy. Anecdotal and empirical evidence in December 2018 has validated this phenomenon.

Compounding the demand pull effect of festive spending was the surge in FAAC by 3.12% to N812.76bn. This means that State Governments and Federal agencies had more liquidity during the period. Also worth mentioning is that the slope of the inflation curve is getting steeper, suggesting that the 2019 budget inflation benchmark of 9.98% may be unattainable. The average inflation rate in 2018 was 12.14% down from16.54%, the 2017 average. 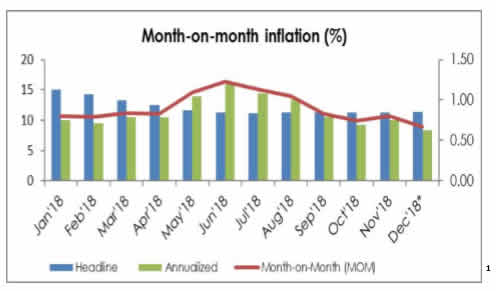 Other inflation moderating factors include a 1.38% increase in on grid power supply, a 2.23% decline in M2 growth buttressed by a sharp drop of 68.84% in the opening position of banks.

An uptick in Nigeria’s inflation at a time when the US inflation is declining and the US Fed is more committed to interest rate hike tilts the interest rate differential in favour of the US.  This increases the probability of naira depreciation. Following the international Fisher effect equation (which states that an exchange rate is expected to change equally in the opposite direction of the interest rate differential) the naira needs to be devalued by at least 10% to keep investors’ indifferent. The MPC could also consider a tighter monetary policy stance.

Inflation trend was mixed across the sub-Saharan African (SSA) countries under review. Two countries have released their inflation numbers for December – Uganda recorded a decline while Zambia’s consumer price index increased. With the exception of South Africa, all the SSA countries under review maintained status quo on monetary parameters at their last monetary policy meetings. 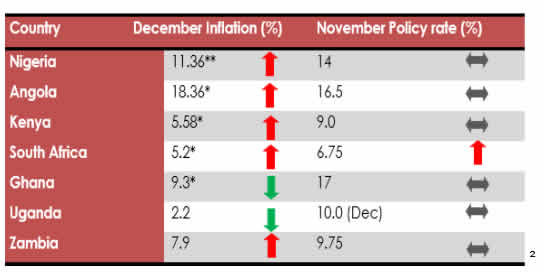 January is usually a slow month and consumer spending typically falls after Christmas. However, the Government has agreed to send the minimum wage bill to the National Assembly on January 23. If the bill is approved, an increase in nominal income and its attendant money illusion effect will boost aggregate demand and prices. This would be one of the major considerations at the next MPC meeting on January 21/22. Being the meeting just before the general elections, we expect the committee members to rely on the slowing monthly inflation rate to justify a dovish approach and thus maintain the status quo. Typically, Central Banks usually avoid any changes to monetary policy in the heat of elections.

Headline Inflation Ticked up by 49 bps to 13.71% in September

Earlier this morning, the National Bureau of Statistics released the Consumer Price Index (CPI) report for September. The CPI which measures inflation increased by...
Read more

After years of low inflation, a forecast of 5-10% seems incredible – but not if there’s a huge shift in the way the global...
Read more

In Meristem's expectation for August, we recounted how global food prices rose to a 7-month high in August and higher energy prices stimulating inflation. However,...
Read more

The Nigerian Monetary Policy Committee (MPC) in its fifth meeting in 2020 is currently considering, amongst other things, developments in the global and domestic...
Read more
- Advertisement -