Ahead of next week’s release of February 2019 inflation data by the National Bureau of Statistics (NBS), our projection analysis of the two major leading indicators of this important national statistic (food prices and exchange rate) revealed that Headline inflation rate in February will likely slide further to 11.34% y/y from 11.37% y/y recorded in January 2019.

Our position is based on the projection of uneven and divergent performance of the two sub-components of the Headline inflation – Food price and Core price (all other items less farm produce) indexes, in the month of February. From our analysis, the Food price index which mirrors the direction of change in the average price of farm produce is expected to climb to 0.84% m/m as against 0.83% m/m in January, but slide on year-on-year basis to 13.49% y/y (due to base effect) as against 13.51% y/y in the previous month. 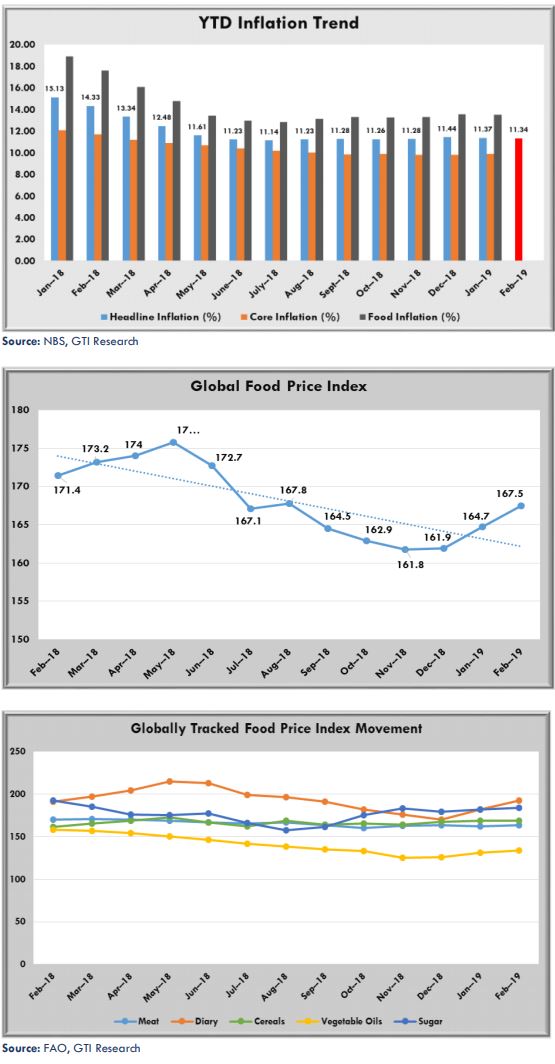 The month-on-month food price index which reflects the actual direction of changes for the month is expected to rise due to slight price increases noticed on a number of major food items including – Yam, Semovita, Pepper and Tomatoes in the month of February. This also corroborates the global trend for the month of February as reported by the Food and Agriculture Organization (FAO) of the United Nations (UN). According to the latest statistics by UN agency, average global food price index rose by 2.7 points in February to 167.5 points owing to increase in the average global prices of Meats, Diary, Cereals, Vegetable Oils and Sugar.

On the contrary, our analysis revealed that Core inflation index which mirrors the direction of change in the average price of all items less farm produce is expected to fall both on month-on-month and year-on-year basis. We expect Core inflation to print at 0.71% m/m (as against 0.81% m/m in January) and 9.87%y/y (as against 9.91% y/y in January). This we believe will be partly driven by inflows of c.$5.50 billion through the I&E FX window in the month of February, which by extension led to Naira appreciating slightly by 0.57% against the USD (from 362.71/$1 at the end of January to 360.99/$1) in the month of February. Hence, we expect the positive impact of this trend to influence the cost structure of benefiting real sector operators and by extension the Core inflation rate.

Overall, we expect a base effect, supported by the divergent dynamics of Food price and Core price indexes in the month of February to drag inflation rate to print at 11.34%.