BMW Group Proceeds to expand sales and market share in May

As part of efforts to reduce the rate of unemployment in Lagos State, Governor Babajide Sanwo-Olu has approved Internship...
Read more
- Advertisement -

May was a productive month for BMW Group sales, with worldwide distributions developing by 3.2% to attain a total of 210,563 premium BMW, MINI and Rolls-Royce vehicles sold. This produces the company’s entire sales for the year-to-date to 1,012,093, an expansion of 0.8% corresponded with the first five months of last year. This sales increase was completed notwithstanding continuous volatilisation in various markets around the world.

“With this good result, we are obviously seeing the result of our model rollout. In May, we were once again able to increase sales above market, thereby gaining further market share,” said Pieter Nota, member of the BMW AG Board of Management responsible for Customer, Brands and Sales. “Especially pleasing is the development of our new X models, as their overall sales increased by over 30% in the month. Similarly, i3 sales continue to grow, bucking the usual cycle, and were up 40% in the month. This helped us reach an important milestone in May, as we delivered our 400,000th electrified vehicle since the i3 was launched in November 2013,” Nota continued.

In May, cumulated BMW Group electrified sales topped the 400,000 marks with a total of 406,756 fully-electric and plug-in hybrid models delivered to customers since the pioneering BMW i3 first went on sale in November 2013. Five and a half years after it was launched, demand for the iconic BMW i3 continues to grow with global sales in May up 40.0%. Overall sales of BMW Group electrified vehicles grew by 9.8% in May, as customers show increasing interest in low emissions mobility. Deliveries of the plug-in hybrid BMW 2 Series Active Tourer* quadrupled in May and sales of the electrified BMW 5 Series* increased by 40.4%. Sales of the plug-in hybrid MINI Cooper S E Countryman ALL4* in May were almost three times as high as the same month last year. By the end of next year, the BMW Group will have introduced ten new or updated electrified models and by the end of this year, the company expects to have a total of half a million electrified vehicles on the roads.

In an extremely competitive segment, and with the company maintaining its focus on profitability, MINI brand sales decreased compared with last year. Deliveries in the year to date totalled 137,698 (-4.0%) while sales in May decreased by 5.1% to 28,255. Availability of MINI models was lower than usual in May, due to the scheduled four-week break in production at Plant Oxford taking place this year in April, rather than during the summer. Preparations continue for the launch of the all-new fully-electric MINI later this year, a model which will be built at the UK plant.

BMW Motorrad sales continue to grow strongly, with year-to-date deliveries up 7.1% (74,958). In May, a total of 17,944 (+5.2%) premium BMW Motorrad motorcycles and maxi scooters were delivered to customers around the world.

Sales in the regions/markets

Despite the various headwinds currently affecting the automotive industry, BMW achieved increased sales in all three of its biggest markets in May. Significant sales growth was achieved in China and Germany, increasing market share in the brand’s home market, while BMW continued to buck the trend in the USA by once again achieving a sales increase in the month. Despite the ongoing competitive and volatile global market environment, the BMW Group expects to achieve an increase in sales in 2019. The company continues to follow its strategy of prioritising profitability before volume. 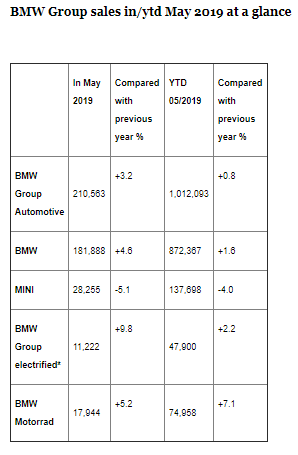 Only a few weeks ago the Mercedes-Benz eCitaro G celebrated its world premiere and already it is "electrifying" Zurich....
Read more
Beverages: Alcoholic & Non-Alcoholic

Heineken reports net profit down 76 percent in Q3, premium portfolio grew by more than half in Nigeria

Heineken N.V. today publishes its trading update for the third quarter of 2020. KEY HIGHLIGHTS Beer volume -1.9% organically for the quarter; -8.1% for the...
Read more
Transportation

A noticeable recovery in the markets and a stabilization of business operations: After a very challenging first half of the year against the backdrop...
Read more
Energy & Power

Revenue of Lekoil Dips by 38%, Scraps Shareholder Payout in Q2

LEKOIL, the oil and gas exploration and production company with a focus on Nigeria and West Africa, reports its unaudited interim results for the...
Read more
Retail - Brick & Click

The BMW Group posted solid year-on-year sales growth of 8.6 per cent in the third quarter, with a total of 675,680 vehicles delivered to...
Read more

At today’s Apple Worldwide Developer Conference it was announced that BMW will become the first carmaker to enable its customers to use iPhone as...
Read more
- Advertisement -