The Walk Against Suicide, created by the Guild of Professional Bloggers of Nigeria (GPBN) in conjunction with ActionAid Nigeria and Lagos State Ministry of Justice, Mediation Centre operates now in Lagos. The contest started in Ikeja, Lagos at 8 am.

The organizers will walk through Obafemi Awolowo Way in an attempt to stimulate Nigerians and the Government on the increasing rate of Suicides in Nigeria.

According to the World Health Organisation, WHO, an estimated 800,000 people die by suicide annually and Nigeria now ranks among the top suicide-prone countries.

According to the World Population Review, Nigeria, with a crude suicide rate of  9.5  per 100,000 population ranks 10th in Africa and 67th in the world. The last month has been rather traumatic. 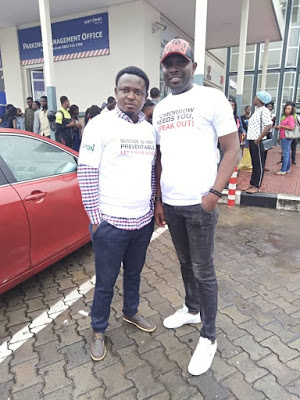 The insecurity challenges in most parts of the country aside, the media space has been awash with reports of cases of suicide.

On the morning of the 6th of April, 2019, the country was greeted with the suicide case of a lecturer at the Department of Mathematics, in the University of Ibadan.

Many other cases have also been reported across the county since then.

On Monday, June 24, a 27-year-old man, Omotola, also known as `Ola-brain’, also added to the list of victims when he took his life.

The President of GPBN, Chris Kehinde Nwandu said the exercise will be a continuous one until the factors leading to the current rising wave of suicide are addressed by the Government and society.

Suicide: One person dies every 40 seconds – WHO

The Federal Road Safety Corps has asked the Guild of Professional Bloggers of Nigeria to seek areas of cooperation with the agency towards curbing...
Read more
- Advertisement -