The growth and opportunity displayed by a diverse spread of International funds, DFIs, Banks, PE firms, institutional investors and others is evidence that despite apparent indifference to African opportunities in SA boardrooms, the continent’s real estate sector has evolved.

As Central and Eastern Europe become increasingly popular for South Africa’s property sector due to subdued growth potential and earnings locally, should these funds not be investing closer to home?

This is the view of Kfir Rusin, the host of the most significant annual gathering of capital investors in African real estate, the 10th annual Africa Property Investment (API) Summit taking place on October 2 & 3 in Johannesburg, whose stakeholders have been more active in the first half 2019 than in the previous 24 months.

“In the first two quarters of 2019, we’ve tracked ten significant transactions in excess of more than a half a billion dollars across multiple jurisdictions and sectors by API Summit stakeholders,” says Rusin. 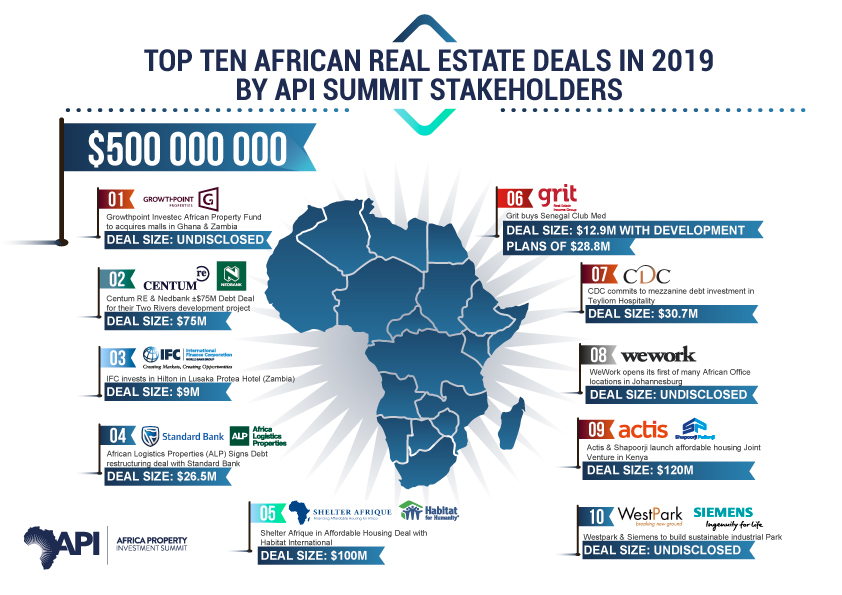 The growth and opportunity displayed by a diverse spread of International funds, DFIs, Banks, PE firms, institutional investors and others is evidence that despite apparent indifference to African opportunities in SA boardrooms, the continent’s real estate sector has evolved, and become increasingly more liquid and provides value in key nodes and sectors.

For investors and developers looking for data and partners experienced in African development or looking to sell prime assets, these are the men and women responsible for structuring and executing these mega deals who will be at this year’s conference, confirmed Rusin. These include GIAPF’s Managing Director Thomas Reilly; Grit’s CEO Bronwyn Corbett; multiple senior investment officers from the IFC; Standard Bank’s Head of Africa real estate, Niyi Adeleye, the CDC’s Illaria Benucci, Centum’s RE MD Samuel Kariuki and many more in attendance.

“The market has moved forward in the past six months, and we’re thrilled that so many major dealmakers will be at the API Summit to transact and share their experiences with our delegates,” he says.

These high-value transactions, while not a repudiation of the South African listed sector’s muted view of the African opportunity, do provide a compelling narrative that the continent’s property markets are investable, but require nuance and insights. It’s not simply a copy and pastes what’s worked here (SA) will work elsewhere says, Rusin.

According to noted real estate analyst Craig Smith of Anchor Stockbrokers, Africa’s top markets are “definitely a more attractive entry point than 18-24 months ago” but cautions that investors still need to exercise a “higher level of diligence” when investing.

And while deal many South African funds continue to look at Central and Eastern Europe for scale (sizeable transactions) and positive funding spreads, says Smith, the transaction spread by API Summit’s investors point to a market that is expanding, which is in line with his view that the “the opportunity set over the long term is immense.”

An analysis which may explain, the increased diversity and complexity in these deals, says Rusin. “We’re witnessing sophisticated deal structuring in Affordable Housing; Hospitality; Logistics; Office spaces and Mixed-use, across countries and regions.”

Regarded among local and international decision-makers as Africa’s Property gathering, the API Summit is recognized as a platform for investing but is also vital in developing deeper layers of transparency for investors looking to meet and understand the continent’s divergent and complex markets to avoid previous mistakes committed by SA developers.

As Smith comments, “Africa’s markets are still relatively opaque, and it is vital that these markets continue with their efforts to improve transparency.” Adding that, “The experience of GIAPF is crucial in my view as this will provide evidence of performance to the SA market.”

The federal government yesterday commissioned the operation of Dukia Gold and Precious Metals Project (DGPMP) that would enable Nigeria to mine her gold reserves...
Read more
- Advertisement -