The Dun & Bradstreet Global Business Risk Report (GBRR, formerly the Global Risk Matrix) ranks the biggest threats to business based on each risk scenario’s potential impact on companies, assigning a score to each risk. The scores from the top ten risks are used to calculate an overall Global Business Impact (GBI) score.

The latest GBI score highlights a fifth successive worsening in the outlook for cross-border businesses, taking the risk to its highest-ever level and significantly above the long-term average.

Risks at the record level

Dun & Bradstreet’s GBI score has worsened for a fifth successive quarter, increasing from 279 (out of a maximum 1,000) in Q1 2019 to 308 in Q2 2019, indicating a serious deterioration in the global business operating environment. The Q2 score is the highest since the measure was launched in Q3 2013, and is well above the long-term average (252.4). It also shows that there has been a significant worsening in business risk since Q1 2018 – when a record low of 219 was recorded.

Our top ten risks combine an assessment of (i) the magnitude of the event’s probable effect on the global business operating environment, on a scale of 1 to 5 (where 1 is the smallest impact and 5 is the largest); and (ii) the likelihood of the event happening.

Highlighting the ever-evolving global environment, there are three new entries in our Q2 2019 GBRR’s top ten: one from each of West and Central Europe, North America and the Pan-Regional categories.

The three new-entry risks are:

Among the pre-existing risks in the top ten, five are unchanged, while two GBI scores have deteriorated. Overall, risks have narrowed in terms of categories with two from North America, and three from West and Central Europe, highlighting the importance of these regions to the global business environment, while the remainder is in the pan-regional classification. In terms of typology, risks remain diverse and are associated with trade, politics, economic developments, new technology and climate change. This reinforces the fact that finance, procurement and supply chain teams across all business sectors need to combat the impacts of an increasingly complex and globalised world. 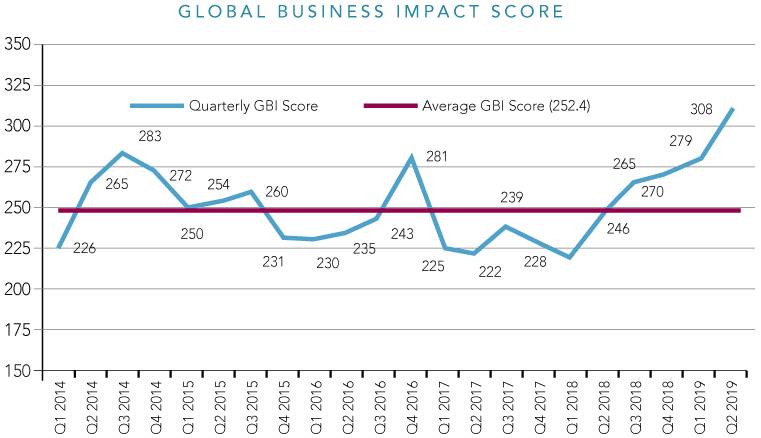 As in the two previous reports, trade risks continue to dominate in our Q2 2019 GBRR, increasing levels of risk for cross-border business, supply chains and business profitability; three of our top ten risks are associated with trade, with two in the first two places. In the first place, with a GBI of 50 (up from 36 in both our Q1 2019 report and the previous one) is our concern that US tariffs hit profits and tax revenues in China as the trade war stalemates, with the likelihood having increased to 62.5%. Contagion from bad debts then triggers a rapid slowdown, overwhelming policy moves to stabilise the economy, with a consequent negative impact on global growth.

The second trade-related risk is that negotiations fail to stop a US-China trade war, which spirals, with negative secondary effects offsetting new opportunities and cooling global trade growth. This risk is in second place with a GBI of 35 (the same as in the previous report). The third trade-related risk is that the UK leaves the EU in a disorderly manner, disrupting supply chains – primarily in Europe, but also globally. This event is in seventh place, with a GBI of 27, up from 24 in the previous report.

The highest new entry in the Q2 2019 GBRR is in equal third place, with a GBI of 30. This is our concern that labour scarcity and anti-immigration policies lead to a drop in long-term EU growth potentials, undermining global business opportunities. Also, in equal third place with the same GBI score of 30 as in the previous report and emanating from West and Central Europe is a second politics-related risk. This one refers to European elections at the end of May ending with strong gains for anti-EU parties, complicating policy-making within the EU and undermining the business environment.

The final political risk is that current US-Iranian tensions lead to actual military conflict between the countries, with the closure of the Persian Gulf to oil tankers, leading to oil prices escalating sharply to over USD150/b with consequent negative impacts for businesses and cross-border trade. This risk has a GBI of 25, is in equal ninth place, and is a new entry in the top ten.

Only one purely economic risk features in this quarter’s GBRR. In equal third place, with a GBI of 30 (the same as in the previous report), and a new entry emanating from North America is the concern that peak rates in the US have been reached for the current expansion, leading to an inflection the credit cycle and eventually the US business cycle; in turn, impacting global prospects.

The final three factors are pan-regional; two are related to climate and the third to technological developments. In equal third place overall, with a GBI of 30 (the same as in the previous report) is our concern that the rapidly growing problem of cyber-dependence and connectivity will lead to more frequent and more damaging cyber-security issues, with ramifications for doing business.

In eighth place overall, with a GBI of 26 (the same as in the previous report) is the first climatic risk. Specifically, we are concerned that jetstream instability continues to create persistent, anomalous weather patterns across the Northern Hemisphere, increasing costs for the public and businesses alike. Finally, in equal ninth place, and with a GBI of 25 (the same as the previous report) is the risk that the hazards forecast by the Intergovernmental Panel on Climate Change (related to ecosystems and extreme weather events) materialise much faster than the consensus view anticipates, creating systemic impacts at the global level.

Dun & Bradstreet’s Global Business Impact score for Q2 2019 shows that the risks confronting businesses have worsened for a fifth consecutive quarter, to reach the highest level on record; in contrast, the record-low score was recorded just five quarters ago, in Q1 2018. The Q2 2019 score highlights that business decision-makers still need to monitor the global business environment continually and carefully ahead of the expected slowdown in the global economy (and despite a solid – if unspectacular – recovery from the 2008-09 recession). The geographical spread and diversity of risks related to trade, politics, economic developments, new technology, and climate make the business environment increasingly challenging.

Anime “A Whisker Away” Premiered Simultaneously on Xigua Video and Netflix

Flower Chimp Hong Kong: E-commerce presents avenues for businesses to thrive, even through a pandemic

HONG KONG, CHINA - Media OutReach - 12 August 2020 - As unprecedented circumstances have swept the world in 2020 with the curve-ball that COVID-19 turned out to...
Read more
Telecom & IT

COVID-19 Impact on Enterprise and the IoT

Dun & Bradstreet Holdings, Inc. today announced the launch of its initial public offering of 65,750,000 shares of its common stock at an anticipated...
Read more