Elated Ezekiel, who is based in Ijebu-ode, Ogun state and has been a bricklayer for over 40 years, found his prize-winning scratch card in one of the Dangote cement promo bags he bought from a distributor in Ijebu-Mushin. On the other hand, Godday, who is the youngest winner of the Star prize so far, found his winning scratch card in Ikorodu, Lagos. 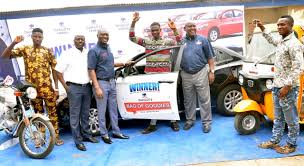 Both star prize winners were given the keys to their brand new cars by top Dangote Cement officials at different handing-over ceremonies in Ijebu-ode and Ikorodu, alongside 10 other lucky promo winners, who carted home various prizes including a tricycle, a motorcycle, 8 refrigerators and two television sets; to the admiration of other Dangote Cement consumers, distributors and the general public. 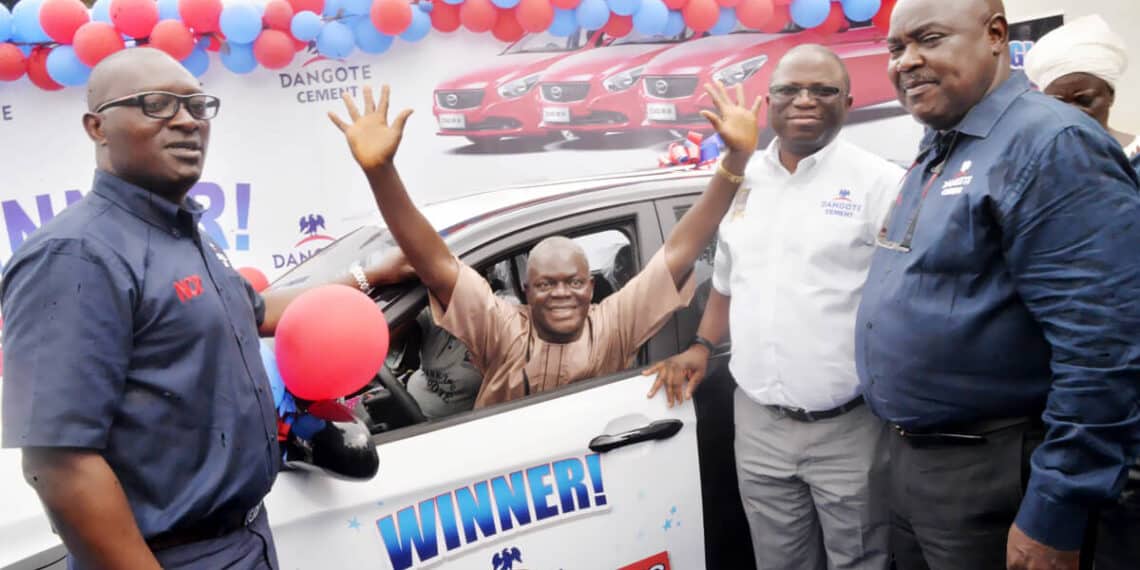 While Mr. Akintaye Oluwagbemiga won a tricycle, Mr. Kamilu Audu won a motorcycle. Interestingly, Mr. Solomon Dayo won three out of the seven refrigerators presented at the Ikorodu event, while Messrs. Ohemu Friday, Innocent Agbo-James, Ransome Watels and Kehinde Adeagbo went home with one refrigerator each. There was also the presentation of television sets to Mr. Dare Olajide and Mr. Oluwadare Gbenga. Likewise, Mr. Imam Adebisi Abdulhakeem, who won a refrigerator, collected his prize at the Ijebu-ode venue.

Handing over the car keys to Ezekiel in Ijebu-ode, National Sales Director, Dangote Cement Plc, Mr. Adeyemi Fajobi told those gathered at the Local Government office venue that the cement promo is real and that there are many more choice prizes to be won.

According to him, all a consumer has to do is to buy the Dangote Cement products and open the bag, adding that whatever is stated on the scratch card is automatically won by the buyer, when taken to any approved depot for the redemption of the prizes.

The National Sales Director added, “Only Dangote can do this. This is a promise fulfilled. Some people were sceptical when this promo began but today, this is proof of our sincerity”.

Also, Regional Director, Lagos/Ogun, Dangote Cement Plc, Mr. Tunde Mabogunje, while handing over the various prizes in Ikorodu, said excited consumers have been coming forward to collect their prizes in the ongoing promo.

According to him, scores of people have come to redeem their winning scratch cards for recharge cards worth Thousands of Naira, pointing out that the promo is a deliberate effort at rewarding the consumers. He also said the company is happy that the consumers are winning.

Head, Route to Market, Dangote Cement Plc, Olukayode Akin-Bamidele said the promo was put up by the President of the Dangote Group, Aliko Dangote to reward consumers’ patronage.

Ezekiel, who is a display of euphoria danced to the podium to claim his Star Prize of a GAC saloon car in Ijebu-ode, Ogun State, added a dash to his win by sending a typed letter of appreciation to the Chairman of Dangote Cement Plc, Aliko Dangote.

The lucky star prize winner, who said he has been a bricklayer for over 40 years, expressed profound gratitude to Aliko Dangote and the Dangote Cement company for the ongoing promo, which has so far empowered thousands of Nigerians as winners of various prizes.

While celebrating his win with his son, Tayo Ezekiel (also a bricklayer) and members of his outfit, who donned “Thank you Dangote” t-shirts, Ezekiel disclosed that he had not won anything before until now, and enthused that the Dangote Cement ‘Bag of Goodies’ promo is a reality which has greatly helped Nigeria.

Speaking on how he emerged the star prize winner, Godday, who couldn’t take his education beyond Primary School due to lack of funds, said he was always watching out for winning cards in any cement bag he opened as a concrete mixer at a building site. He commended Dangote Cement for putting up the promo to alleviate poverty in the country.

The Dangote Cement ‘Bag of Goodies’ promo, which began nationwide in July and is to run till September end, has so far yielded numerous winners of prizes in various categories.

Among other unique gifts, a total of 43 brand new cars, cash prizes of N200 million, 24 tricycles, 500 refrigerators, 24 motorcycles, 400 television sets, generators, Goodies packs, are available for winners in a promo, which has generated so much excitement among Nigeria, with over 21 million lucky winners targeted.