Is Nigeria Immune To The Next Global Slowdown?

A decade after the 2008 financial crisis, the question that has preoccupied the minds of a number of Nigerian investors is how immune Nigeria is to the looming economic slowdown. Forecasting a global recession can be tricky especially with the IMF predicting global growth of 3.6% in 2020. However, with the trade tensions between the two largest economies (US $ China), an economic slowdown is imminent.

The US/China trade war took a new dimension when the US threatened to impose a 10% tariff on approximately $300 billion worth of Chinese goods from September 1. In response to Trump’s trade restrictions, the Chinese government devalued the yuan to its lowest point in over a decade. This resulted in the US labelling China as a currency manipulator and further deepening the rift between both countries. The devaluation of the Chinese yuan is a signal from China that a currency devaluation is an option if the US/China trade war escalates.

However, the currency appreciated to its highest level since March 2008. President Trump also suspended the imposition of new tariffs on specific goods such as laptops, phones, footwear, clothing etc until December 15th.

Impact of the trade crisis in Nigeria

Nigeria is not immune to the looming economic slowdown. This is because the economy is largely dependent on the US and China. 21.3% of Nigeria’s imports are from China while approximately 8.4% is from the US. In addition, Nigeria’s fiscal revenues, growth and development are dependent largely on the oil markets. The volatility in the global oil market remains one of the major risks to Nigeria’s growth trajectory. The collapse of crude oil prices in 2015/2016 caught many by surprise and led to the economic recession.

On average, statistics show that there is a positive correlation between oil prices and GDP growth rate. This implies that as oil prices fall, GDP declines. In the last week in July, oil prices gained on lower US crude inventories and the expectations of the US Fed interest rate cut. On August 1, geopolitical tensions were back at the forefront. The oil narrative was dominated by the looming trade war between China and the US. Following US tariff hikes against Chinese goods and retaliatory actions from Asia’s economic giant, the oil market enjoyed another bullish run as oil prices crashed by 11.95% to a seven-month low of $56.23pb on August 7. 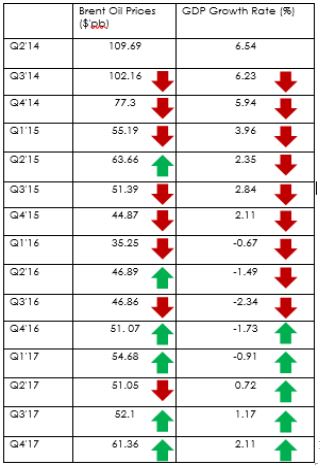 Thanks to the larger-than-expected drop in US crude inventories, oil prices are now above the CBN’s benchmark of $60 a barrel. The on-and-off global geo-political tensions can cause one to lose sight of market fundamentals, which have remained largely unchanged. Supply is still at a record high, although, it has been curtailed by OPEC and its allies, while the growth in Asian and European demand has softened year-on-year.

A significant increase in supply or a sharp dip in global demand due to the trade tension could lead to a plunge in global Brent prices. This will reduce Nigeria’s oil proceeds, which has been supporting economic growth and fiscal spending. Given that dollar liquidity is a function of oil proceeds, the reduction in forex flows will have implications for the exchange rate and could lead to currency depreciation, the introduction of more forex restrictions and higher inflation.

The following is an excerpt from Financial Derivatives Limited, titled Economic Bimonthly Update