Earlier, the National Bureau of Statistics (NBS) published Nigeria’s Q2-19 GDP numbers. According to the report, real GDP expanded by 1.94% y/y, slower than revised figures of 2.10% y/y and 2.38% y/y for Q1-19 and Q4-18 respectively. However, this was an improvement, relative to Q2-18’s 1.50% y/y growth. Notably, the outcome mildly fell short of our expectation for growth to stay within the 2.0% threshold. The overall GDP growth was dragged by the non-oil sector which slowed to 1.6% y/y (vs. 2.05% y/y in Q2-18, and 2.5% y/y in Q1-19). Three key sectors – Agriculture, Trade, and Information & Communication sector – which contributes above 50.0% to the GDP, witnessed underwhelming outcomes. Specifically, the Agriculture (+1.8% y/y) and ICT (+9.0% y/y) sector, recorded slower growth compared to Q1-19’s 3.1% y/y and 9.5% y/y, respectively. Also, after a positive recovery in Q1-19, the Trade sector contracted by 0.3% y/y in Q2-19, amid difficult operating environment, constrained consumer wallets, and lack of economic stimulus. In all, of the nineteen activity sectors that make up the GDP, five recorded negative growth, eight posted slower y/y growth and six saw faster growth compared to Q1-19.

Oil GDP: Fresh out of a recession

The performance of the Oil sector changed course in Q2-19, recording a positive uptick, after four consecutive quarters of decline. The report showed Oil GDP grew by 5.2% y/y in
Q2-19, an improvement compared to -1.5% and -4.0% recorded in Q1-19 and Q2-18. This
was supported by the growth in oil production, as crude oil production for the period averaged 1.98mbpd, up 7.6% y/y. However, contribution remained marginal, with the sector contributing c. 8.8% to the aggregate GDP – a decline relative to 9.2% recorded in
Q1-19. Additionally, crude oil prices which averaged $68.5/b in Q2-19 supported nominal
oil-GDP, comparing favourably to Q1-19’s average $63.8/b weaker supplies linked to the
crisis in Venezuela and the Iranian sanctions during the period.

Read:  Nigeria’s GDP could easily grow to $1trn by 2023 If we revive these 10 moribund industries
- Advertisement -

Read:  The Treatment Will Give To Our Children Is An Example Of Our Societal Values

The Agriculture sector growth settled at 1.8% y/y in Q2-19. While this is a slowdown relative to the 3.2% y/y in Q1-19, the growth is faster than the 1.2% y/y recorded in Q2-18. Notably, the sector remained exposed to the seasonal boom and bursts of the planting season as Crop Production which accounts for above 85.0% of the sector’s GDP added only 1.9% (vs. 3.3% in the corresponding quarter). Meanwhile, the Livestock sub-sector – the second largest contributor to Agric. GDP remained flat. On the other hand, the Forestry sub-sector emerged as the only Agric. sub-sector that saw a faster growth to 3.2% y/y in Q2-19 (from 2.2% y/y in Q1-19) while growth in the Fishery subsector slowed to 1.1% y/y (from 7.1% y/y in Q2-19). Perceptibly, an explanation for the poor outing of the Agric. sector would be the continued spate banditry and insecurity in the middle belt and northern regions of the country, which seemed to have escalated since the post-election period. 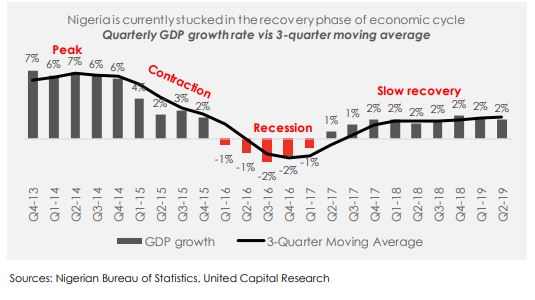 Outlook: Growth to rebound in H2-19

In H2-19, we expect the momentum in the Nigerian economy to remain tepid, below
population growth of 2.6%. This is predicated on the continued operating challenges in the
economy and absence of the implementation of major policy reforms thus far during the
quarter. Notably, growth in the Manufacturing, and Construction sector, that largely depends on government spending should receive some boost in H2-19 as the newly formed cabinet set out to implement the 2019 budget. FG’s revenue challenges remain a huge downside risk growth in the trade activities amid rising debt servicing. A tepid outlook for oil prices and improvement in oil output suggest a neutral impact on the broader growth number. Most importantly, a pull-back in the Agric sector growth dampens the outlook for GDP growth if issues of kidnapping, banditry, etc, remain on checked. Factoring all the above, our expectation for FY-19 GDP growth is pegged at c. 2.1%.