Nigeria, a British territory adjoining other French colonial territories, was in the middle of an economic boom and was the cornerstone of the West African economy. In late 1949, the British & French Bank launched its first branch in Lagos, the economic capital of Nigeria.

B&FB grew fast and attracted the interest of companies from various sectors of the economy. In the following years, the B&FB network expanded to cover the different regions in the country, opening offices in Kano in 1953, Ebute Metta in 1955, Port-Harcourt and Apapa in 1956, Ibadan in 1958, Kaduna in 1960 and Enugu in 1961.”

In 1958, new banking legislation was introduced, leading to the establishment of a central bank in 1959 and the introduction of a new banking decree aimed at improving governance over banks.

UBA was then incorporated as a limited liability company on 23 February 1961 taking over the assets and liabilities of B&FB. It later became the first Nigerian bank to make an Initial Public Offering (IPO), following its listing on the NSE in 1970.

In 1997, an insolvent bank, Crystal Bank Limited was acquired by a young banker, Tony O. Elumelu. The distressed bank was rechristened Standard Trust Bank (STB) Limited and thus, began the journey to the actualization of a vision.

By the end of 1997, barely 7 months after taking over, the STB team was able to turn around Crystal Bank’s position of N6.49million to a whooping N473million.

The STB brand was gradually being domesticated across all the other states in Nigeria at a time when bank branches in the country were disproportionately skewed towards commercial locations.

When Nigeria returned to democratic rule in May 1999 STB was already strategically positioned to provide financial assistance through credit facilities packaged for state and local governments, and secured with Irrevocable Standing Payment Orders (SPOs) tied to the monthly financial allocations of state and local governments from the Federation accounts. By the yearend of 1999, STB had become the first Nigerian bank in history to declare annual profits that exceeded the billion-naira mark. STB had suddenly become a bank to reckon with.

In 2003, STB got listed on the Nigerian Stock Exchange.

By mid-2004, STB was already the 5th largest bank in Nigeria and was comfortably aiming to hit an N40 billion mark. The consolidation exercise presented an opportunity for growth and the bank began to explore M&A options with the top 3 banks at that time: First Bank, Union Bank, and UBA – the third largest bank in Nigeria. 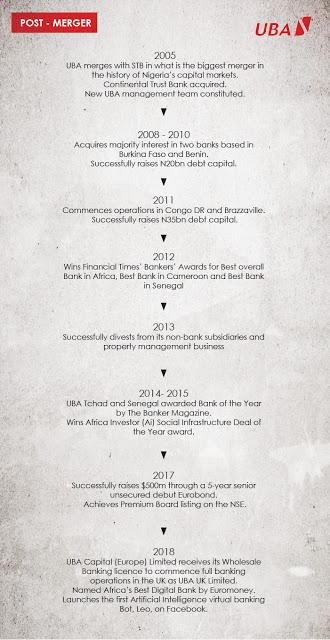 “Today’s UBA is an amalgamation of old STB and UBA – a fusion of legacy, strength, and dynamism, agility and new energy,” says Tony Elumelu, the Chairman of United Bank for Africa Plc.

Today, UBA plays a leading role in private and public sector partnerships aimed at supporting the acceleration of Africa’s economic development, and with operations in the United States of America, the United Kingdom and presence in France, UBA’s remarkable African footprint makes it the bank of choice for Africans and African businesses as well as players in the global and other emerging markets.

Read Also:  World Bank Scales Up Emergency Support for Mozambique, Malawi, and Zimbabwe in the Wake of Cyclone Idai

In its Transport fare Watch report for April 2020 on Wednesday, the National Bureau of Statistics (NBS) said the average fare paid by commuters...
Read more
- Advertisement -

Thinking Of Auditioning For BBNaija? Here’s What You Should Know!

It’s three days left to the close of BBNaija auditions for season 5! ICYMI, BBNaija is back with a brand-new season in July 2020. The...
Read more

The Managing Director, Ecobank Nigeria, Patrick Akinwuntan called on parents to ensure their children study online and stay on top of their education despite...
Read more
- Advertisement -