According to the National Bureau of Statistics (NBS), headline inflation rose for the first time in three months in September, advancing by 22bps to 11.24% YoY to beat Bloomberg consensus estimate of 11.00% YoY and our 11.10% YoY forecast. The price pressure was largely driven by an acceleration in food inflation (+34bps to 13.51% YoY in September), which constitutes over 50.0% of the consumer price index. We also note that core inflation rose (+27 bps to 8.94% YoY) for the first time this year in September, to further stoke overall inflationary pressures.

We attribute food inflationary pressures on the impact of border closures in August 2019. In our view, the closure of several land borders, including the bustling Seme border, to combat food smuggling, led to reduced supply of imported food and increased demand for local food production. Specifically, the prices of popular food imports, such as rice and frozen foods, rose significantly during the review month, according to several market watchers. The prices of domestic food products such as garri, yam, cassava and local rice also increased materially in September on higher demand pressures. Although we noted the risks to food inflation in prior communication (see our report titled “Border closures may only offer temporary subsidy reprieve”), we had expected the commencement of main harvest season to provide some offsetting impact.

Elsewhere, the first increase in core inflation in 2019 coincided with increases in Housing, Water, Electricity, Gas and Other Fuels (HWEGF); Transport; and the Miscellaneous Goods and Services sub-indices. While we await the release the energy inflation figures, we note the reported increases in the price of PMS across some key border towns following the deployment of security operatives to clamp down on smuggling. 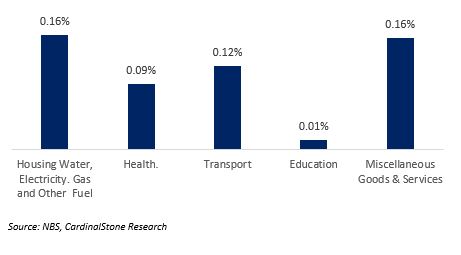 The impact of border closures on food inflation materially changes our expectation for headline inflation for the rest of the year. We envisage a sustained uptick in inflation in the coming months, with the borders likely to remain shut pending a compromise between Nigeria and its neighbours. Moreover, we expect further price pressure for staple foods from increased demand due to Christmas festivities. Specifically, the price of rice, in particular, is expected to rise given the nation’s supply gap of c.2.7 million tonnes. Beyond 2019, upside risks remain on the horizon. The scheduled increase in electricity tariffs beginning in January 2020, the proposed increase in VAT to 7.5% and the implementation of the minimum wage pose material upside risks for 2020. We thus expect the Central Bank of Nigeria to maintain its tight monetary stance in the face these risks and lower near-term oil price forecasts.

Kindly click here for the full report from the NBS

The United Arab Emirates Ministry of Health has announced a diagnosis of a coronavirus case in a family from Wuhan in China – the...
Read more
Business & Economy

The National Insurance Commission (NAICOM) anticipates several M&A transactions in Nigeria in 2020. No lesser than six insurance companies have notified the regulator of...
Read more

• LASG Intensifies Preparedness Against Infectious Diseases Lagos State Commissioner for Health, Prof. Akin Abayomi has said that the Chinese government through her embassy in...
Read more

…Sanwo-Olu: ‘It’s A New Journey Toward Developing Lagos’ Lagos State Government has opened a new chapter in its stride towards attaining self-sustenance in finance...
Read more

The United Arab Emirates Ministry of Health has announced a diagnosis of a coronavirus case in a family from Wuhan in China – the...
Read more