Pre-CPI report: Why we expect a further surge in October Inflation rate

Official In the week ahead, the Nigeria National Bureau of Statistics (NBS) will publish the October 2019 Consumer Price Index report (CPI) which will show the direction of movement (up or down) of the general price level (Inflation rate) in the country for the month. 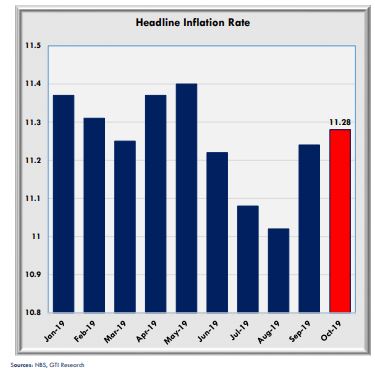 As such, we conducted a Pre-CPI report analysis, and our findings suggest that the Headline inflation rate (a measure of the average change in the price level of both food and non-food items) will climb by a minimum of 4bps to 11.28% y/y from 11.24% in the preceding month. This modest upsurge we believe will mainly be driven by a joint increase in both the Core inflation (i.e. non-food items price index) and Food inflation (i.e. food price index). 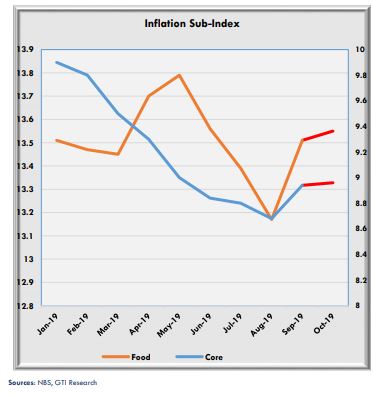 Our position is hinged on the projected effect of three notable drivers within the month – the spillover effect of the current land border closure, renewed exchange rate pressure, and seasonality effect.

First, we expect the spillover effect of the land border closure by the FG since August 2019 to further weigh on the food price sub-index in the month of October, given that local production capacity of many of the affected food items is inadequate to cover the gaps created in the system due to the border closure. As such, we expect the food price sub-index to climb to 13.55% y/y (or 1.35% m/m) from 13.51% y/y (1.30% m/m) in the previous month. This we expect to be impacted majorly by the high cost of rice, vegetable oil, frozen turkey, fish and chicken.

Likewise, we expect the renewed pressure on the naira exchange rate caused by oil price & output volatility, and low capital importation (both of which has now drove the foreign reserves to $40bn as against $46bn 6-months ago) to pressure Core inflation (non-food items price index) to 8.96% y/y (or 0.96% m/m) from 8.94% y/y (or 8.94% m/m) in the preceding month. It is worthy to note that the oil price & output volatility, and reduced capital importation into the Nigeria financial market is largely driven by the recent slowdown in global economic activities, triggered by the U.S. and China trade tension and other geopolitical crises.

Lastly, we also expect the characteristic high end of the year demand for food and
non-food items to support our projection of a rise in inflation rate to 11.28% in
October, likewise the remaining two months of the year.