Which countries reduced poverty rates the most?

One of the goals of the World Bank Group is to reduce extreme poverty—defined as living on less than $1.90 per day in 2011 PPP—to less than 3% by 2030. We know that the world has seen tremendous progress in reducing extreme poverty since 1990. So, where in the world has poverty reduction been most successful?

The graph below shows 15 countries that experienced the largest annual average percentage point declines in extreme poverty rate between about 2000 and 2015, out of the 114 countries for which we can measure poverty in a comparable way over this period. 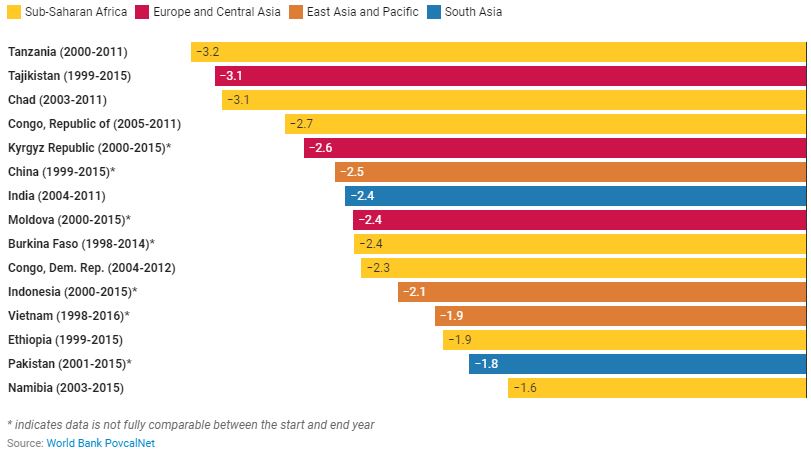 While extreme poverty remains endemic in low-income and conflict-affected countries, many of which are in Sub-Saharan Africa, there is cause for optimism even in these countries. Seven of the top 15 countries are in Africa, and two are on the World Bank Group’s Harmonized List of Fragile Situations for FY19.

Some of the 15 countries (China, Kyrgyz Republic, Moldova, Vietnam) effectively eliminated extreme poverty by 2015. In others (e.g. India), low rates of extreme poverty in 2015 still translated to millions of people living in deprivation. In some of the countries in Sub-Saharan Africa (e.g. Democratic Republic of Congo, Tanzania, Burkina Faso), extreme poverty rates, even after rapid reduction, remain above 40%.

These 15 high performers make up a diverse group of countries—by geographic location, average income levels, poverty rates, and size of the population and the economy:

- Advertisement -
Read Also:  How hard is it for businesses to comply with VAT/GST obligations around the world? In which countries is it optimized?

The World Bank has predicted that five million more people will become poor at the end of 2020 due to the impact of the...
Read more

Poverty and Inequality: What is the outlook?

Recently, the National Bureau of Statistics (NBS) published Nigeria’s Poverty and Inequality report for 2018-19. According to the report, 40.1% of the total population...
Read more

Global remittances are projected to decline sharply by about 20 percent in 2020 due to the economic crisis induced by the COVID-19 pandemic and...
Read more
- Advertisement -