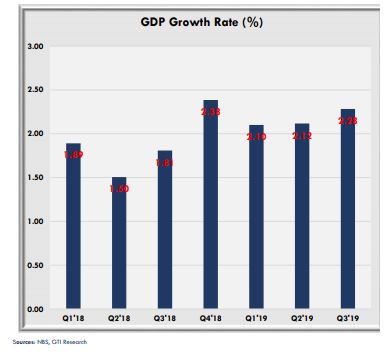 Probing into the data critically, our analysis revealed that the GDP rally was mainly driven by the non-oil sector, while the oil sector performance came in dismally. The non-oil GDP growth came in at 1.85%y/y as against 1.64%y/y in the previous quarter and 2.32%y/y in the corresponding period of 2018. This was impacted by improved growth in two of the three non-oil sub-sectors – Agriculture (which printed at 2.28% vs 1.79% in Q2’19) and Industries (which printed at 3.21% vs 2.84% in Q2’19), save for Services sector which recorded weak expansion of 1.87% as against 1.94% in the previous quarter.

In addition, we noticed expansion in major non-oil sub-sectors such as Road Transport (20.18% as against 8.21% in Q2’19), Coal Mining (32.19% from 7.63% in Q2’19), Cement (6.87% as against 1.58% in Q2’19), Agriculture (2.28% from 1.79% in Q2’19), and Air Transport (15.23% against 12.31% in Q2’19). These could be attributed to accelerated commercial activities ahead of end of the year festive period and religious pilgrimage exercise (Road and Air Transport), improved government monitoring of the natural resources sector (Coal Mining), release of over N600bn by the federal government for capital projects (Cement) and the joint effect of the harvest season and land borders closure which positively impacted the patronizing of homegrown food items (Agriculture).

On the other hand, the expansion of the oil component of the GDP came in low at 6.49% y/y, as against 7.17% y/y in Q2’19, but much better than the contraction of -2.91% in the corresponding period of 2018. This could be attributed to the sustained decline in global crude oil demand amid weak growth, triggered by the Sino – U.S. trade tension and other regional concerns.

We expect the release of more funds for capital budget implementation, continued monetary and fiscal sector reforms, and characteristic high end of the year demand to drive stronger growth in Q4. As such, we projected a 2.40% growth in Q4’19.

Julius Berger announces that the company’s Board of Directors at its meeting held on September 22, 2020, approved a diversification opportunity for the Company. Julius...
Read more
Business & Economy

As a result of the shutdown, many businesses were unable to carry out activities to generate income; this meant an increase in default risk...
Read more
Telecom & IT

Rise of The Saints, a feature-length film produced by Grand Redemption Platform, co-produced by Accelerate TV, and distributed by Silverbird Film Distribution will be...
Read more
- Advertisement -

Cross River State is Nigeria’s second-largest cocoa producing state with an annual crop of about 80,000 tonnes. It also has the advantage of bordering...
Read more

The just-released foreign trade statistics by the National Bureau of Statistics for Q2:2020 tells how Nigeria’s external sector fared in the wake of the...
Read more

COVID-19 has had a far-reaching impact on the global economy with Africa, not an exception. Using the Gross Domestic Product (GDP) growth rate of...
Read more

South Africa’s gross domestic product (GDP) decreased by 51.0% in the second quarter of 2020 owing to the impact of the COVID-19 lockdown restrictions...
Read more
- Advertisement -