According to the National Bureau of Statistics (NBS), Nigeria’s economy grew by 2.28% YoY in Q3’19 compared to a revised growth of 2.12% YoY in Q2’19 and a 1.81% YoY growth in Q3’18. The performance was supported by a rebound in the non-oil sector (1.85% YoY) as well as continued growth in the oil sector (6.49% YoY). Breakdowns indicate that the rebound in the non-oil sector was supported by growth in Agriculture, Telecommunication and Manufacturing sectors. Elsewhere, the sustained resurgence of the oil sector continues to reflect higher oil production amid fewer disruptions to oil infrastructure.
Figure 1: GDP expanded at the fastest pace in four quarters in Q3’19 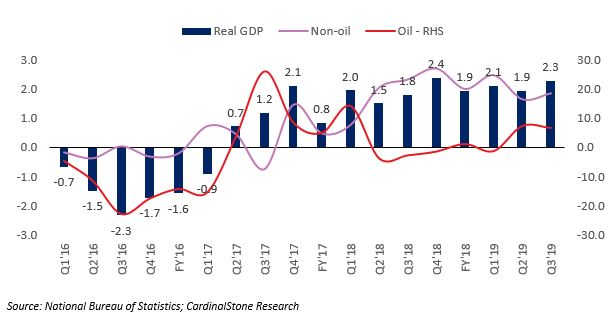 Non-oil sector grows as Manufacturing and Agriculture sectors rebound
Despite broad weakness in purchasing power and slow wage growth, the non-oil sector grew by 1.85% YoY in Q3’19, outperforming Q2’19 by 20bps. We attribute the slight non-oil recovery to expansions in Agriculture, Manufacturing and Telecommunication sectors, which offset a second consecutive contraction in trade GDP. Precisely, the Agriculture sector, which constitutes c.29% of GDP, grew by 2.28% YoY in Q3’19 following the slow growth recorded in the previous quarter (1.79% YoY) owing to security concerns. The rebound in Q3’19 may be linked to better security outcomes in food-producing regions as well as the boost in local production following improved border enforcement. However, we note that the sector’s growth remains lower than the historical 8 year average of 3.7% YoY. Similarly, the impact of border closures may have also been favourable to the manufacturing sector, which grew by 1.10% YoY in Q3’19 (versus -0.13% YoY in Q2’19). We, however, note that the border enforcements may have simultaneously dragged trade GDP lower in the period, given that a significant portion of goods resale originates from the borders. Elsewhere, although we have not seen a repeat of the double-digit telecommunication’s sector growth witnessed in 2018 due to waning base effect, the sector was powered to strong single-digit growth of 9.0% YoY in Q3’19 on a robust increase in subscriber base.
Click here for the full report.

The Nigerian Government generated the sum of N651.77 billion from Value Added Tax (VAT) in the first six months of 2020. The National Bureau of...
Read more