Recently, the National Bureau of Statistics (NBS) published Nigeria’s Capital Importation report for Q3-19. Accordingly, we observed that on a q/q basis, the total capital imported dipped for the second consecutive quarter, down 7.8% to $5.4bn in Q3-19, lagging $8.5bn and $5.8bn inflows recorded in Q1-19 and Q2-19 respectively. A deeper dive into the numbers showed FDI inflows declined 10.2% q/q to $0.2bn while FPI inflows which accounted for over 50.0% of total capital imported, fell sharply by 30.1% q/q to $3.0bn.

Meanwhile, the other investments category rose by 66.2% q/q to c. $2.2bn, thanks to a 99.2% rise in inflows from loans. Notably, the bulk of the FPI inflows remained dominated in money market instruments (85.0% of FPI inflows) while the much needed FDIs stayed underwhelming – contributing a paltry 3.7% to gross inflows. We note that the lack of critical infrastructures, such as electricity and a good road network, was the reason for the continued poor FDI performance. However, we attribute the decline in FPI inflows to the lack of frequent OMO sales in Q3-19 and Q2-19 respectively. 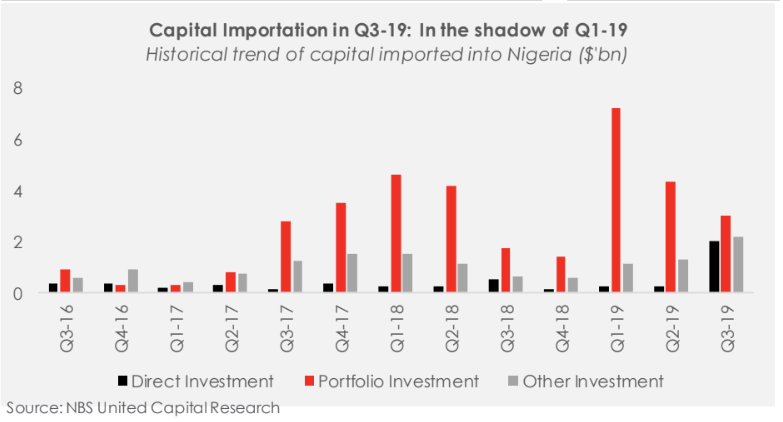 Looking ahead, with bold reforms necessary to create an enabling environment still at large, we expect to FDIs to continue to remain on the sidelines. On the other hand, if the trends observed so far is anything to go by, we do not see inflows to money market returning to its Q1-19 high.

Since the outbreak of COVID-19, the NBS has been conducting impact surveys, assessing the welfare of Nigerians. The latest survey conducted in Jan-2021 provides...
Read more
- Advertisement -