The sort code is a number which usually identifies both the bank and the branch where an account is...
Read more
- Advertisement -
The romantic comedy ‘Dear Affy’ is the first full feature directorial film of media mogul, Samuel Olatunji who is widely known in the entertainment circle as ‘Big Sam’. He also doubles as the executive producer of the new movie, and he recently told news men that the latest movie Dear Affy has been included in one of the movies to be showcased in Nollywood Time Travel Film Festival Glasgow in the United Kingdom on 23rd of February 2020.
Dear Affy has been in the spotlight since the announcement of its release in the cinemas nationwide on valentine day, 14th of February 2020.
The movie parades superstars that cut across generations and tribe. Here is a highlight of some of the titans ‘Dear Affy’ parades.
Kehinde Bankole. Arguably one of the most beautiful actresses in Nollywood. Kehinde Bankole dazzles in a major role in ‘Dear Affy’. The dark-skinned actress and screen diva has garnered admiration from fans due to her stylish lifestyle and charisma. On the train of ‘Dear Affy’, she brings her stylish self into action by adding spice to the movie playing the lead character. The intelligent actress Kehinde Bankole who plays the lead role in ‘Dear Affy’ team up with other notable celebrities to give outstanding performance in the new movie.

Bimbo Akintola, is in ‘Dear Affy’. An award-winning actress with many credits to her name. Robustly soul spirited and beautifully lively. She is deemed one of the few actresses that can be defined as fine wine, her attention to detail is a unique skill. The 49-year-old beauty brings her treasurable experience and talent to the table and delivers her role uniquely in the romantic comedy film Dear Affy.
Afeez Oyetoro, He is administered to a role in ‘Dear Affy’.  The veteran comedian is an enthusiast of theatre practitioners who is known for his clown role in Nigerian movies, he brings his funny and natural self to the movie ‘Dear Affy’. He has credit to many stage productions, TV series and movie production. Afeez Oyetoro currently lectures at Adeniran Ogunsanya College of Education. He brings a comical relief to viewers in a unique way that has earned him enormous respect across households in Nigeria.

Faithia Williams is on the cast list of ‘Dear Affy’ the luscious actress and producer have so many presences in both Yoruba and English films. The talented actress has a way of interpreting any role assigned to her remarkably, Faithia has starred in and produced several movies and won the Africa Movie Academy Award for the most outstanding Indigenous actress and her movie Iranse Aje won the indigenous film of the year.

Toyin Abraham, proudly on set for the movie, ‘Dear Affy’. Toyin Needs no introduction as she has been ruling the screen of Nigerian films for over a decade. The talented actress who is adaptable and vibrant in interpreting her role has once again created something spectacular on the set of ‘Dear Affy’ that is now gearing up for the cinema. The talented actress is loved by many and is indeed a major expectation to observe when ‘Dear Affy’ sets sail.

Enyinna Nwigwe, is an actor and activates a major role in ‘Dear Affy’. The movie producer who from all angle garners admiration and praises from his fans due to his magnetizing look and high fashion sense. The handsome actor played the leading role in ‘Dear Affy’ thereby bringing his skills to create a masterpiece in the movie. He is famously remembered for his mesmerizing role in ‘wedding party’ and of course, his fine boy looks really will make fans giddy up and stay glued to the movie screens.
Chiwetalu Agu. Being one of the foremost actors in Nollywood, his inclusion on ‘dear affy’ cast lists is widely celebrated. Agu’s ingenuity is unique as an actor because of his wit, humour, an invention of specific clichés, customized phrases or slang in every film. For his numerous fans, he is fun to watch any day. His inclusion in the movie ‘dear affy’ didn’t come as a surprise as his talent would surely put a smile on the faces of the viewers. What amazes most watchers is how he combines his well-disciplined life with the roles he acts in films. Even though Agu has the versatility to play the roles of comedian, wicked or tricky person, he sometimes finds it difficult to reconcile his lifestyle with negative roles. 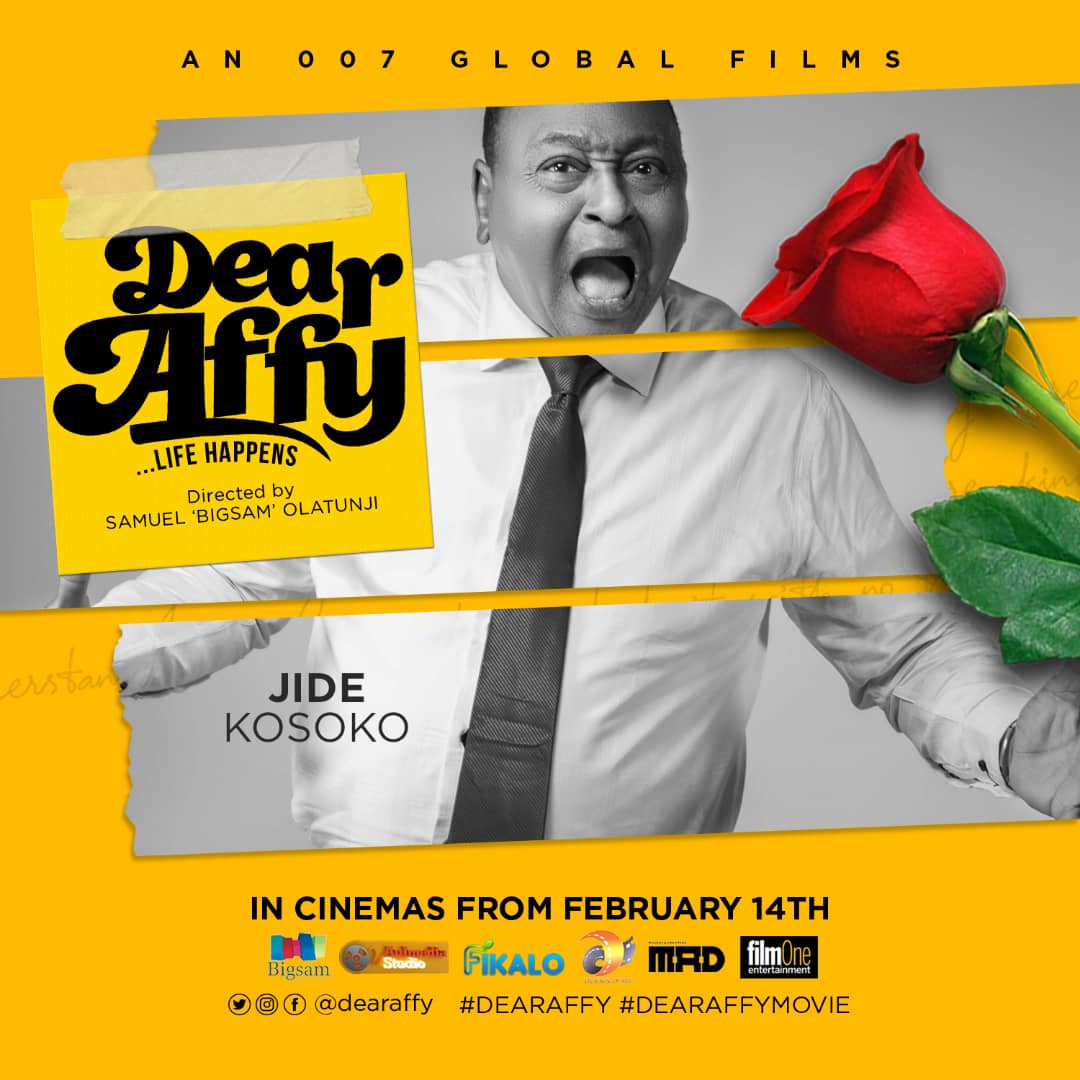 Jide Kosoko is a Nigerian actor, producer and director and brings his wealth of experience and expertise into ‘Dear Affy’. He began his professional career at age 10 and has remained in the Nollywood industry for more than five decades. Jide is one of the pioneers of the Yoruba movies and has featured in numerous films. Also, he is a versatile artist who delivers his role perfectly. Jide Kosoko started as a member of the Association of Nigerian Theatre Arts Practitioners. He became a PRO and subsequently the President. Also, he has been nominated for several awards and has won a few of them as well. He’s popularly referred to as the granddaddy of Nollywood. He is set to thrill in the movie, ‘dear affy’. 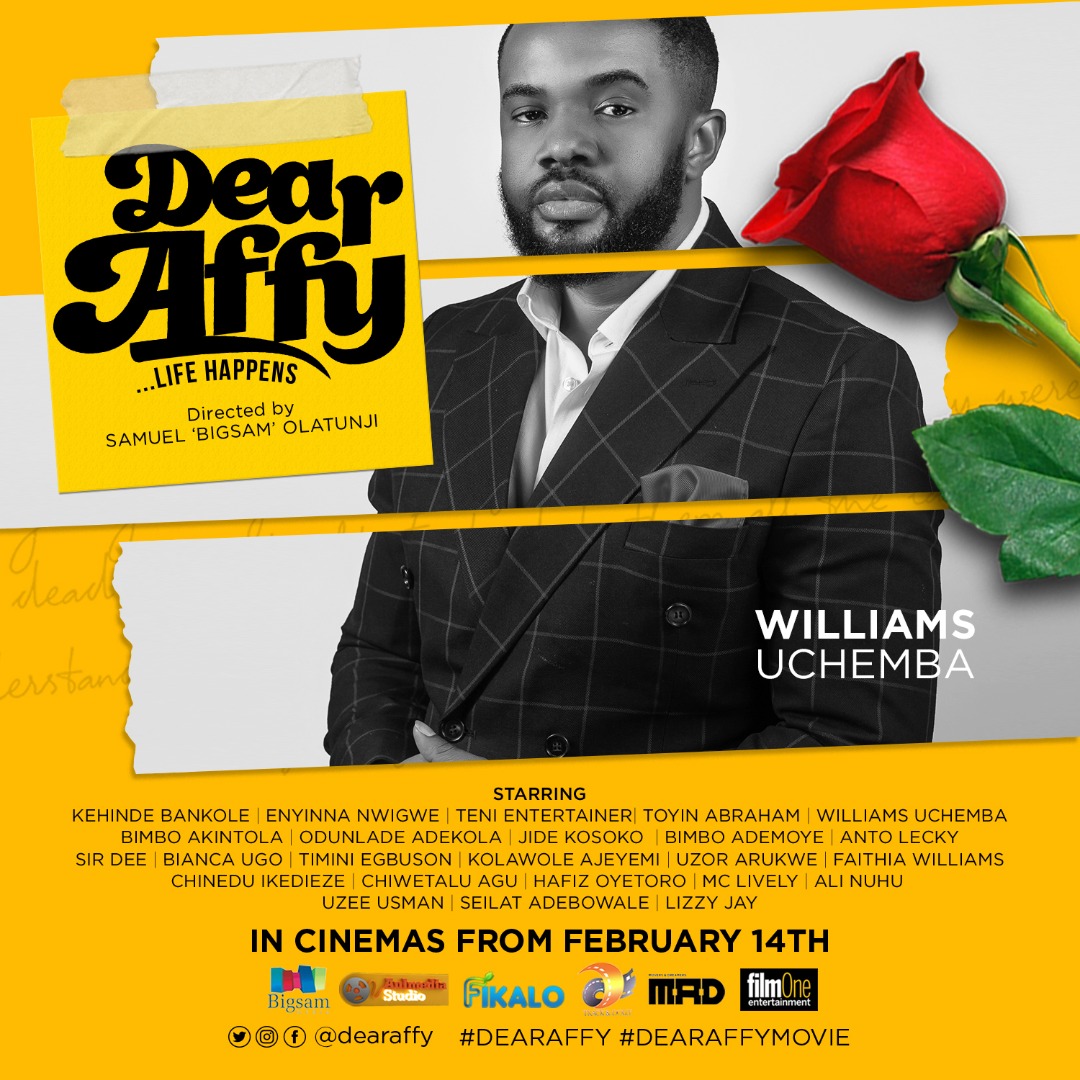 Williams Uchemba who is a popular figure in the Nollywood industry signs in on Dearaffy and stars beautifully well in the movie. The former child actor started acting in the year 2000 rose to fame in 2001.  Uchemba is popularly known for his unique movie interpretation roles even as a young kid, he has a special talent for unifying his roles with his personality so well, recently, he refined his acting talents into making popular comedy skits and videos filled with humour. Recently he has majorly featured as part of the cast lists for the merry men and will be one to watch in ‘dear affy’

Odunlade Adekola the handsome actor who also signs up for ‘dear affy is well-loved for being very passionate about acting and has a unique character interpretation when acting. Odunlade has acted in more than 100 movies released by Yoruba producers and he is widely respected for his professionalism and attention to detail in role interpretation. He has a range of awards received for his works as one of the best Nollywood actors. Certainly, he is a major act we all look forward to in ‘dear affy’.
Bimbo Ademoye  The smart and intelligent Bimbo is featured in DearAffy and is one of the best in the acting business. talk about beauty and brains, Bimbo is known to be impeccable in defining and interpreting her acting roles. She is admired for her energetic disposition towards her acting engagements. She possesses an incredible physique and is regarded as one of the beautiful Nollywood actresses. Watch out for her role in ‘Dearaffy’
Teni entertainer. The popular Nigerian artiste and singer makes her debut in ‘dear affy’ and acting for the very first time, it is no doubt the uyo meyo crooner carries with her vibrant energy and sure display of emotions in her song and indeed earned her a role in the movie. The beautiful singer was praised and well commended for her role in the movie by the movie director himself calling her a natural-born talent. Surely her expertise is something to look forward to. 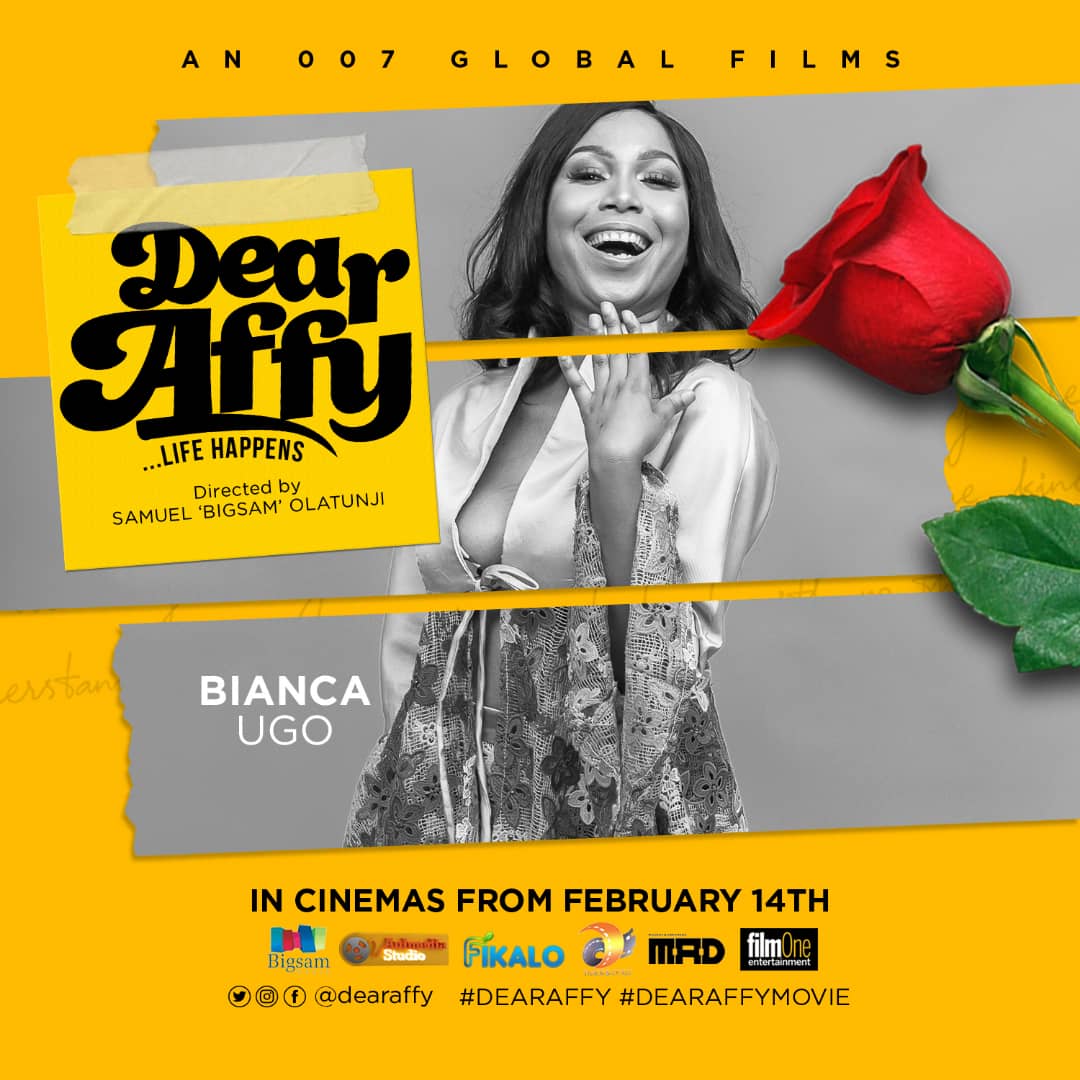 Bianca Ugo. Bianca is an upcoming talent currently on the cast list of ‘dear affy’. Vibrant and elegant beauty plying the fast track of success and taking the movie industry by storm. She takes on her first major role on the jolly adventure in the world of acting by featuring in ‘DearAffy’. She writes and is famously known as a journalist. A talented beauty
‘Dear Affy’ is a romantic comedy film that tells the story of a beautiful career lady on her to getting married to the man of her dream who is on the verge of sealing millions of Naira worth of contract. However, he is faced with the devil and the deep blue sea as sealing the contract is hinged on him having an intimate affair with the female billionaire contractor by all means just a few weeks to his wedding.
The movie will hit cinemas nationwide and in Ghana from February 14th, 2020. It is expected to premiere exclusively to select few on Sunday, February 9.